Potential allies of Avigdor Liberman, such as Isaac Herzog, Tzipi Livni and Moshe Kahlon, might rethink their political attitude toward him, following corruption suspicions against some of his party members. 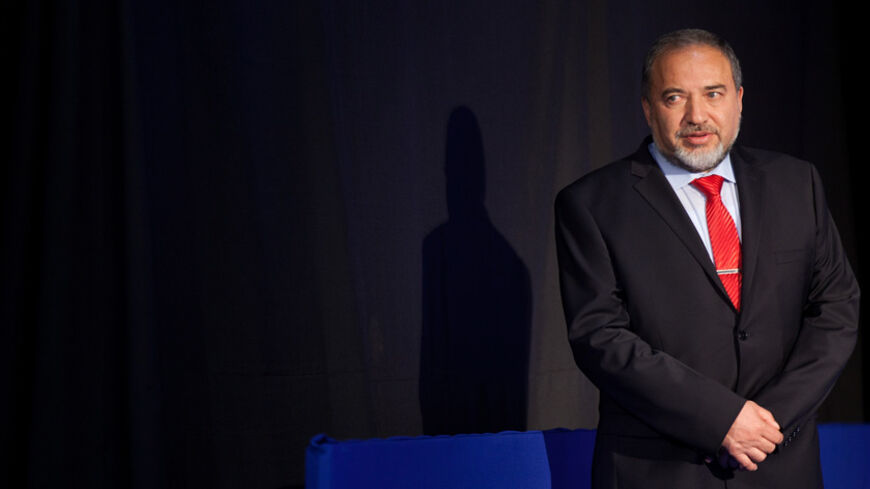 Foreign Minister Avigdor Liberman had a well-prepared and cohesive campaign plan for the 2015 elections — a masterpiece based on in-depth polling results and the familiar Liberman pragmatism, designed to move him closer to the political center.

His shift to the center, as reflected in banner headlines setting out Liberman’s peace plans and including sharp criticism of the damage caused by Prime Minister Benjamin Netanyahu’s diplomacy of status quo, is political genius. Liberman’s plan for aligning himself with the center, which emerged soon after early elections were announced on Nov. 28, was designed to turn the chairman of the Yisrael Beitenu Party into a legitimate candidate for the position of prime minister and an attractive choice for left-wing voters.

As he has done in recent election cycles, with the help of his American strategist Arthur Finkelstein, Liberman managed to identify and dissect deep-seated trends among the Israeli public and the centers of gravity on the political map to adapt the most contemporary suit to fit his party. He understood that he had reached the limit of his electoral appeal on the right and that he could not compete with its rising star, Economy and Trade Minister Naftali Bennett. He also understood that his hold on the Russian-speaking public — which was his mainstay for years — was being eroded by a natural process of “Israelization” among the younger generation of immigrants from the former Soviet Union.

Just then, with his power waning and the achievement of 15 Knesset seats in the 2009 elections seeming far and unrepeatable, he understood that he was faced with a one-time chance of becoming prime minister. How? By riding the “Anyone but Bibi” wave and turning himself into a modular player, meaning one suitable for a right-wing government, but no less so for a pragmatic, center-left government.

Given that in the Israeli political system there isn't any one, big sweeping party, Liberman could be the man to determine the next prime minister, and under certain circumstances even to condition his support for Labor Chairman Isaac Herzog as prime minister on a rotation arrangement. In other words, to become prime minister and send Netanyahu home.

This option was further bolstered by his alliance with Kulanu Party Chairman Moshe Kahlon, who, like Liberman, positioned himself "either way," in the game between the two blocs (the right and the left). The two even signed a vote surplus agreement and are being billed as the Bennett-Lapid duo of the 2015 elections, meaning the two who will determine the shape of the next coalition and its leadership.

Up to that point, everything was working out for Liberman. Even the police investigations that had clouded his life for 15 years and stained him with suspicions of corruption had long been terminated.

But just when it seemed that Liberman’s star was shining brightest, with no obstacles in his way, a bombshell suddenly disrupted his well-laid plans: an affair of alleged corruption in Yisrael Beitenu suddenly burst into the headlines on Dec. 24. The police investigation, which involves dozens of suspects led by Liberman’s right hand, Deputy Interior Affairs Minister Faina Kirshenbaum, is, as far as he is concerned, a major attack against his campaign. True, we are just at the beginning of the affair and there are still 2½ months to go until the March 17 elections, but it is already clear that Liberman is facing his greatest ever crisis, greater even than when he himself was the subject of police investigations.

There’s a good reason that Netanyahu’s home field newspaper, Yisrael Hayom, has been dedicating extensive coverage to the affair, with headlines such as “Party Affair” that can barely conceal the glee at the downfall of the man seeking to wipe out the prime minister. The potential electoral damage to Yisrael Beitenu is by way of being Netanyahu’s lifeline.

The explanation is simple: The electorate who votes for Yisrael Beitenu is mostly right wing and therefore expected to remain in that bloc no matter what, voting for either the Likud or HaBayit HaYehudi parties, thus increasing Netanyahu’s prospects of being the next prime minister.

For Liberman, there’s another aspect to all of the above: Supporters of the center-left who considered voting for him because they saw in him the new “[former Prime Minister] Ariel Sharon” who would launch a pragmatic, courageous diplomatic process, will now think twice whether to give their vote to a party stained by institutionalized and deep corruption. Even though all of the alleged suspicions are as yet unproven, the extent of the affair is bigger than the sum of its parts.

It’s not just that Kirshenbaum, Liberman’s right hand and confidante, who runs the party for him, is suspected of serious wrongdoing. Other suspects in the affair include senior figures in the party apparatus, for example former Minister Stas Misezhnikov, who is also embroiled in other, unrelated criminal suspicions.

On the eve of the previous elections, Liberman dissociated himself from Misezhnikov without batting an eyelash, because he understood that his once-close ally and confident was a liability.

What will he do now? Even if he demands that Kirshenbaum resign, he will still be left with a mass of people suspected of corruption at the top of his party apparatus. Not to mention the damage to preparations for election day, which Kirshenbaum has deftly orchestrated. Preparing for elections with a paralyzed party apparatus, most of whose senior figures are busy in police interrogation rooms fighting to prove their innocence, is a tremendous problem for a party whose strength lies in organization.

Liberman’s troubles have implications for the entire political system, not just for Yisrael Beitenu — first of all, for leaders of the center-left. Whereas Liberman has already set the stage and prepared the ground for a joint run with Labor-Hatnua, despite his racist worldview toward Israel’s Arab population, he has now become a problematic partner. Former Labor Party leader Shelly Yachimovich said a week ago that the thought of Liberman as prime minister shatters her. It will be much harder now for her and for people like her, to resign themselves to cooperation with Yisrael Beitenu within a ruling coalition.

In addition, any electoral damage to the party will make it less significant and less useful for the center-left bloc. That is why Yisrael Beitenu’s entanglement troubles the Herzog-Livni pair, too.

The 2015 elections were until now all about “Anyone but Bibi” and the sense that the right wing’s hegemony on power could be broken by Liberman’s move to the center and Kahlon’s flexibility on the diplomacy front. Liberman is now embarking on a fight to save Yisrael Beitenu and he may be forced to change course in the middle of the election campaign.

One thing is certain: At the end of this week the color returned to the cheeks of the denizens of the prime minister’s residence on Balfour Street.