Prime Minister Benjamin Netanyahu is surrounded by rivals trying to topple him, yet two of them, Shas Party leader Aryeh Deri and Foreign Minister Avigdor Liberman, must concentrate on their own political survival. 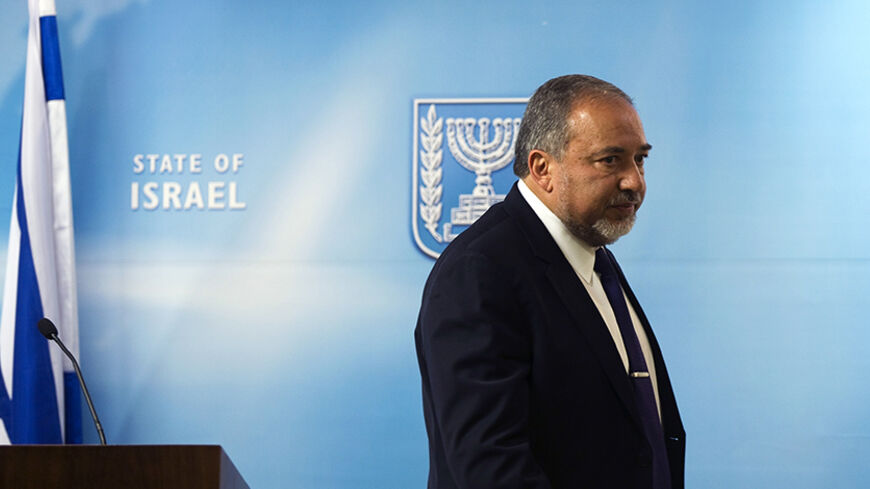 Avigdor Lieberman leaves after giving a statement to reporters at his Jerusalem office, Dec. 2, 2014. - REUTERS/Ronen Zvulun

The Israeli election campaign continues to astonish and generate strategic developments, each of which can become a watershed around which all players can create a totally new order. The “Anyone but Bibi” coalition took several hard hits at the end of December, blows that undermined the equilibrium, stability and chances for success of said coalition in the elections to be held March 17. All is not yet lost, but Prime Minister Benjamin Netanyahu’s position today, 77 days before Election Day, looks a lot better than it did a week ago. The list of politicians who joined together to replace him (Labor Chairman Isaac Herzog, former Minister Tzipi Livni, former Minister Yair Lapid, former Minister Moshe Kahlon, Foreign Minister Avigdor Liberman and Shas Party leader Aryeh Deri) is on the defensive.

Several of its members (Liberman and Deri) are taking hard electoral and public hits.

Two secret programs were planned in recent months by key protagonists of the Israeli political telenovela. The first is the plan of Liberman and Kahlon to unite the day after the elections and to appear together before President Reuven Rivlin (who mandates a candidate to form the government). According to this plan, the two of them hoped to realize at least 25 mandates between them, thus constituting a new bloc that, the day after elections, could emerge as the Knesset’s largest party.

These two politicians originate from the right-wing bloc, but they are also capable of forming a government which would be (willingly) joined by Herzog, Livni and Lapid. Such a setup, according to this plan, would have turned them into the surprising “black horse” of the campaign.

This alliance (although not yet finalized, it includes already clear understandings between the sides), placed Liberman as candidate for the premiership and Kahlon for the Finance Ministry. In order to form a government they were prepared to offer a rotation to the Herzog-Livni Labor Party. (In such a case, Livni would concede “her” rotation that Herzog had promised her if they won.)

This plan went up in the smoke of the dramatic police investigation that fell like a thunderbolt on the Israeli political system on Dec. 23. Liberman’s closest associates from the Yisrael Beitenu Party are under arrest and are being interrogated around the clock. This, in the framework of an affair where numerous party members are under suspicion of turning the party into a sort of a petty cash and a banking clearing house for funds that were transferred from the country’s treasury to various associations and institutions in exchange for hefty commissions. Liberman himself was not interrogated and is not considered as a suspect, but no one can gamble on this being the final step. At any given point in time, any one of the people close to Liberman can entangle him in something. And that would place us in a completely different scenario.

Liberman has been aggressively attacking the police and State Attorney’s Office ever since the investigation opened. Liberman cites the timing of the investigation which, he argues, totally coincides with the election timeline. The statistics seem to justify Liberman: He was targeted with all kinds of investigations or bills of indictment before every campaign in which he was involved since 1999. But the verbal attacks on the “rule of law” does not help him in his surprising, well-publicized journey from the depths of the political Israeli Right to its Center, as described here in Mazal Mualem’s excellent article.

The right loves to hate the police and the State Attorney’s Office, but the political center still views “the rule of law” as a sacred value. Thus Liberman is likely to suffer disappointment from the results of his verbal attacks. As of now, he is succeeding in returning part of his lost Russian electorate to the fold of the party by virtue of the police “persecution.” Although the extent of damage that the investigation will inflict on Yisrael Beitenu is still unclear, it is quite obvious that Liberman’s dream of breaking through the 10-mandate threshold toward 15 mandates, has vanished into thin air at this stage. All this makes the first plan described above to be almost irrelevant.

The second plan is that of Minister of Economy and Trade Naftali Bennett, chairman of HaBayit HaYehudi. Bennett is trying to anesthetize the political map. He disseminates entertaining, viral Internet video clips in which he is disguised as a Tel Aviv hipster. He deliberately does not attribute to himself goals that are too high; doesn’t talk about the premiership and doesn’t fix his gaze publicly on the defense minister position. But behind closed doors, Bennett is target-focused and his people aim at the highest seat in Israel, the prime minister’s chair.

According to the plan, Bennett will continue to grow in the polls and “siphon off” some of Netanyahu’s electorate. Bennett is younger, more cutting edge, more right, and is a lot more “cool.” He attracts large numbers of youths thought to be aligned with the center and even brought in to the party Yinon Magal, TV presenter and editor-in-chief of the popular Walla website. Like Bennett, Magal was secular and had served as a commander of the IDF's special elite unit Sayeret Matkal until he “saw the light,” turned rightward and became closer to religion. Today, Magal holds right-wing national positions.

If Bennett does attain the 20 mandates threshold (now he's somewhere near 18), then he can approach Netanyahu the day after elections and festively tell him that if he wants to rule, he’ll have to give Bennett a rotation. Or at least, the defense portfolio. Both of these options cause quite a number of Israelis to break out in a cold sweat at the thought, especially within the dwindling cadre of peace-process supporters. But this plan is still alive and kicking, and progressing exactly as it was programmed to progress.

One of the important poles in the campaign to replace Netanyahu was supposed to be Shas leader Aryeh Deri; Deri is an experienced, cunning politician and charismatic ultra-Orthodox leader who was convicted of receiving bribes in 1999 and sent to prison for a long time. Deri returned to politics and succeeded in enthroning himself again in Shas, the Israeli ultra-Orthodox Sephardic party that traditionally joins all right-wing governments, sometimes also center-left governments. Deri’s problem is that the man he deposed from the Shas leadership, former Minister Eli Yishai, swore to take revenge.

On Dec. 28, Israeli TV Channel 2 broadcast a tape in which Shas’ much venerated religious leader, the late Rabbi Ovadia Yosef, speaks harsh words about Deri and expresses unconditional support for Yishai. The cassette became a tremendous, melodramatic political storm and, as a result, Deri submitted his resignation to Shas’ Council of Torah Sages.

But Deri’s resignation was inauthentic; it was planned. The Council of Torah Sages did indeed demand that Deri retract his resignation and accept the Council “decree” that he continue to lead the party. At the time that this article is being written, Deri is still “undecided.” Even if he retracts his resignation (according to widespread estimates), it is hard to believe that Shas will return to its former strength. At the moment, surveys show that the public is fed up with Shas, that Deri receives only five mandates while Yishai, who has established a new, competing party, does not even reach the electoral threshold. Under certain circumstances and on a bad day, a situation could emerge in which both Deri and Yishai will remain outside the walls of the Knesset and the power of the ultra-Orthodox in Israel, which rises from year to year due to demographics will be dealt a serious blow because of political intrigues and decay.

As of this moment, it is not clear if this process is good or bad for those who aspire to replace Netanyahu. Deri has a long-term political alliance with Liberman and he could, potentially, have been the one to crown Liberman and Kahlon (together with Herzog, Lapid and the Ashkenazi ultra-Orthodox), at Netanyahu’s expense. As of now, however, what concerns Deri is neither Netanyahu nor Liberman, but his own political survival.