How this minister may take down Netanyahu's government

Seventeen years after being convicted of bribery and corruption, Interior Minister Aryeh Deri is being investigated and might leave the government, which would endanger the whole coalition. 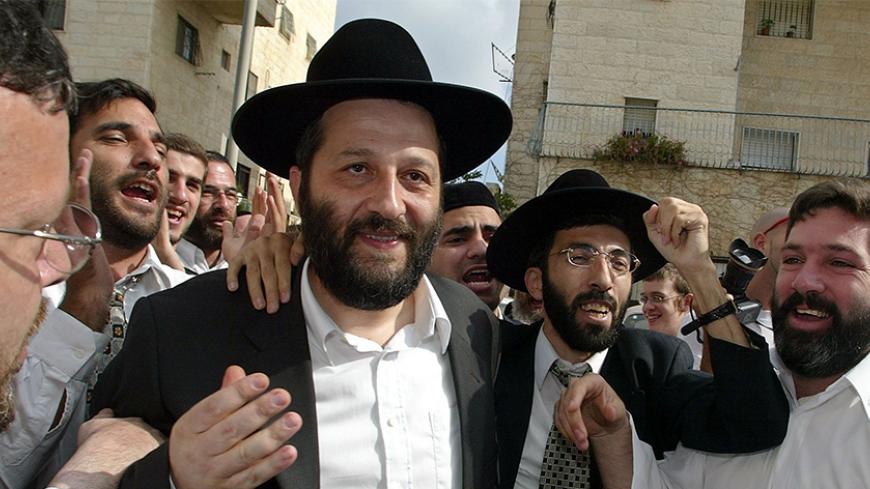 Interior Minister Aryeh Deri is one of Israel’s most intriguing politicians. He was CEO of the Ministry of Interior at age 27, interior minister at 29, one of the founders of the ultra-Orthodox Sephardic Shas Party, and a favorite of the party’s all-powerful mythological leader, Rabbi Ovadia Yosef. Deri was a boy wonder in Israeli politics, and even though he was affiliated with an ultra-Orthodox party, he won over hearts and minds among nonreligious Israelis as well. Deri speaks the language of the man on the street, loves to stir up the media and understands the voice of the masses more than most others.

Under his leadership, Shas allowed late Prime Minister Yitzhak Rabin to pass the 1993 Oslo Accord in the Knesset in 1993. The party demonstrated moderation and even diplomatic pragmatism in the 1990s. But then came the criminal investigation against Deri, followed by a bill of indictment for taking bribes. A long court case ensued, leading to a resounding conviction in March 1999.

Israel’s Sephardic-traditional public viewed Deri’s court case as racist political harassment. After Deri's conviction, Shas soared to 17 mandates in the Knesset in May 1999. However, this was also Deri’s swan song. He was forced to abandon political life immediately afterward, and he was given a three-year jail sentence, with the court reducing his sentence by one year in 2000. His spot as head of the party was inherited by Eli Yishai, whose views are more extreme right-wing than Deri. Shas became a right-wing party and an automatic ally to Prime Minister Benjamin Netanyahu.

After Deri finished serving his time and also a cooling-off period (Israeli law stipulates that politicians committing an offense involving moral turpitude can only be re-elected after seven years pass since the day they are released from jail), Deri began to make his way back to politics. Meanwhile, Rabbi Ovadia Yosef passed away; he had been Shas’ undisputed spiritual leader and a Torah giant of the generation in the eyes of hundreds of thousands of Israelis. Deri prevailed over Yishai, regained control over Shas, and made a clean sweep of seven mandates in the last March 2015 elections. He returned to the government and the Cabinet. Now Deri was all grown up, realistic, mature and power-hungry.

After he resigned from his position of minister of economy and trade, Deri was appointed interior minister in January 2016. This is the same position he held in his youth and in which he got into trouble with the law and was indicted for criminal offense. On March 29, Channel 2 exposed a new criminal scandal with Deri in the middle of it. It also revealed that Attorney General Avichai Mandelblit approved opening an inspection of Deri's case. This affair threatens, again, to cut down Deri’s political career, this time for good. And at the same time, it may even fell Netanyahu’s government as well.

Such a development could have deep implications in numerous fronts. The security issue is one of them. Deri is viewed as Israel’s most reasoned, prudent and responsible minister in the security Cabinet. He is the darling of the military men and the security apparatus, who view him as a calming counterbalance to the surplus of Likud ministers and radical right-wingers who constantly demand more aggressive actions against terror.

Deri is one of the more experienced of the government ministers. He was never radical in his beliefs, and in his first round in the Knesset, he succeeded in transforming Shas, the majority of whose electorate tends toward the right, into a pragmatic entity that does not hesitate to join forces with left-wing governments and peace initiatives. Deri is a skilled politician. He excels at creating political connections and building bridges between opposing political personalities. This helps him serve as the government’s “official maintenance guy,” preserving the coalition intact. He is the one who greases the government wheels and helps Netanyahu and Defense Minister Moshe Ya’alon block foolhardy security initiatives raised by the rest of the Cabinet members. The possibility of Deri being ejected again from the Cabinet and forced to resign is causing the top brass of the Israel Defense Forces to lose sleep, but not only them. Such a scenario worries Netanyahu as well.

Politically, Shas was and remains the deciding factor. This time, like always, there will be no government without it. If the police probe will, indeed, morph into a real criminal investigation, the public will demand that Deri be fired or suspended from his role in the government. Ordinarily, a minister in Israel can continue functioning as usual even when he or she is under investigation. The only time a minister must resign is when an indictment is filed; this is a process that can continue for many months, or even many years. Any other minister would continue in his post as usual even when under investigation, but Deri is a special case. The fact that he already went astray, was convicted and incarcerated turns him automatically into a punching bag of the media and of sections of the public. If, indeed, there will be a criminal investigation, very heavy pressures will be exerted on Deri as well as on Netanyahu.

The key question is: What will Deri do then? Will he accept the verdict and suspend himself? Or, alternatively, will he decide to fight for his innocence and respond aggressively, politically speaking? Under such circumstances, he could break all the rules and take Shas out of the government, which would lead to the government’s immediate downfall.

Netanyahu, who in recent days has heaved a sigh of relief and given himself a check mark in his political notebook, has started to worry again. The check mark was the result of Finance Minister Moshe Kahlon’s announcement that the coming budget for 2017 will be biennial. A biennial budget is an almost sure-fire, two-year insurance policy for Netanyahu and his government, because the odds for bringing down a government on nonbudget matters are very low.

But the possibility of an investigation against Deri shuffles the deck once again. Now a new threat enters, and Netanyahu resumes the pose he loves best — that of the leader who knows how to survive and fight for his existence. In Israel, according to 2014 legal amendments, a government may be overthrown mainly via the budget. The other methods are almost impossible to carry out. So at exactly this point, in which Netanyahu succeeded in fortifying his government for the next two years, a new threat arrives on the scene. A common Israeli air force expression is, “The only thing that can bring you down is something you didn’t see coming.” Netanyahu never dreamed that Deri would topple him. It hasn’t happened yet, but from now on, the possibility is somewhere in the cards.

In recent weeks (February-March), quiet feelers have extended between Netanyahu and Zionist Camp leader Yitzhak Herzog regarding expanding the government. But Netanyahu was only playing with Herzog and had no serious intentions. Until now, all that he tried to do was frighten the ultra-Orthodox, who are threatening to cause a coalition crisis in light of the historic compromise with the Reform and Conservative movement over prayer arrangements at the Western Wall.

Meanwhile, on March 30, it was revealed that Herzog might also be involved in a scandal of his own. It was published that the police are now investigating suspicions that Herzog violated the party funding law (Israeli law stipulates a maximum donation sum) while running for the Labor Party head position. The situation has indeed become complex.