Is Netanyahu on his way out?

Less than a week before the elections, all options are still open, be they a government headed by Zionist Camp leader Isaac Herzog, by Prime Minister Benjamin Netanyahu or by both. 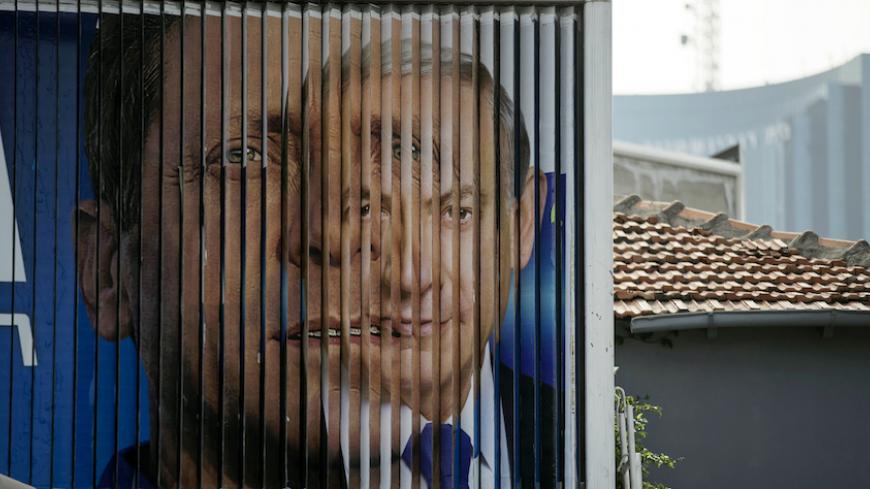 It would seem that Israel had never seen such a surprising, capricious and unpredictable election campaign as the current one. In the last three months, almost every week featured some kind of upheaval, or rule-changing political drama, or other event with a direct effect on the political system. There is hardly an Israeli political player whose current status and position is even close to the assessments regarding his status at the beginning of the campaign.

Even on March 12, five days before elections, it is still very hard to predict the results. Above and beyond all else, one thing is clear: The Israeli 2015 elections are, more than anything else, a referendum on the one and only issue: Prime Minister Benjamin Netanyahu. Yes or no, that is the question.

Let’s start with Netanyahu: Although we may have forgotten, the truth is that it was the prime minister who called for early elections, even though he could have served another three years as premier. He did this because he was sick and tired of the situation and had misgivings about Yesh Atid leader (then Finance Minister) Yair Lapid. In addition, Netanyahu suffered a personal, resounding blow and setback in the preliminary reading of what is nicknamed “the Israel Hayom (newspaper) law,” a bill designed to limit the free distribution of the freebie newspaper Israel Hayom. This newspaper, identified with Netanyahu, is underwritten to the tune of tens of millions of shekels by Netanyahu’s associate, Jewish-American casino magnate Sheldon Adelson.

When Netanyahu opted for early elections in December 2014, he was in the consensus. Even his opponents knew that the elections would entail only minimal political adjustments and that Netanyahu’s chances of being defeated and losing the premiership were minuscule, if at all.

And behold, three months later, Netanyahu is lagging significantly behind in the polls, the buzz on the street is against him, he is hemorrhaging seats and fighting for his political life. The assessment in Israel is that if Netanyahu receives fewer than 20 seats, he will resign from political life in the course of election eve or immediately after it. At the moment, the official polls give him around 21 seats. He needs to lose another two to end his career.

In recent days, Netanyahu has burst out in a “gevalt” campaign, the Israeli (Yiddish) appellation for an emergency campaign that admits to the possibility of defeat and calls on all Likudniks to “come home” to save the right-wing regime. On March 13, the last polls will be published (by law, polls may not be published in the last four days before the elections), and will reveal to Netanyahu whether or not his approach is succeeding.

At the end of the week, the prime minister decided to break his silence and give interviews to anyone who asked, meaning to almost all the Israeli media outlets. Until now, Netanyahu preferred to be interviewed by friendly niche channels such as ultra-Orthodox radio stations. Suddenly, he is interviewed everywhere. These days are reminiscent of Netanyahu’s last days in power in 1999 (his first term as premier), and also former Prime Minister Ehud Barak’s last days in power in 2001.

Should Netanyahu lose the election, it will be very reminiscent of the defeat of George Bush (the father) to Bill Clinton in 1992. Bush was a much esteemed American president, the world’s all-powerful CEO who presided over a short and relatively cheap military campaign in the Gulf, in the course of which he brought Iraqi President Saddam Hussein to his knees, liberated Kuwait and got home safely. Bush was supposed to win the elections by a landslide, just as Netanyahu is expected to in 2015. But Bush lost because he didn’t understand the real problems: He didn’t understand that the American nation felt suffocated, the economy was faltering, unemployment was rising sharply, the American dream was slipping out of reach. By the time he understood, it was too late. Americans wanted something else altogether, and they got it.

The rest of the players in the Israeli political arena are also to be found in places they didn’t anticipate only a few months ago. Zionist Camp leader Isaac (Buji) Herzog, who could hardly garner 12 to 13 seats at the beginning (at the time, Netanyahu enjoyed at least 25 seats), now leads the polls. Overnight, Herzog became the alternative candidate and the prime minister’s only rival, a default to Netanyahu.

The process that led to this political miracle was Herzog’s joining up with Tzipi Livni, head of the Hatnua Party. On a personal level, Livni became one of the most disliked politicians in Israel, mainly to the right. But the Herzog-Livni partnership jump-started the Zionist Camp campaign and gave it its first advance, its first leap forward that transformed the Zionist Camp into the only political alternative. Lapid, who did not invest enough energy in his persuasion efforts vis-a-vis Livni, can only regret it now. If Livni would have joined up with him, it is altogether likely that he (and she) would now be leading the polls, and not Herzog.

Nevertheless, Lapid is capable of reproducing his 2013 elections achievement (19 seats), or approach that number. When the campaign began, Lapid was a defeated, controversial candidate who was much criticized on all sides. His personal popularity hit a new low, and the number of his projected seats ranged from seven to eight. Today Lapid is the best campaigner in Israel, he enthuses the street and the public, his rallies are attended by thousands and his political machine is effective, accurate and as precise as a Swiss watch. He employs the services of the best polling adviser in town: Mark Mellman, an American. Lapid is already nearing 14 seats and if he succeeds in recreating the flood of votes in the final days of the campaign, he may even climb higher than that.

The ultra-Orthodox arena is raging and storming. The simple, ultra-Orthodox political map of yesteryear, in which Shas was for the Sephardim (Middle Eastern Jewry) and Yahadut HaTorah was for Ashkenazim (European Jewry), has now become a three-pronged wrestling match: Shas split apart with an uproar as Eli Yishai, the former leader, left while slamming the door behind him. One scandal followed another; politically compromising videocassettes from the house of deceased Shas spiritual leader​ Rabbi Ovadia Yosef, public statements, mudslinging and defamation. At this point, Yishai (who recently founded the Yachad party) is wavering on the verge of the electoral threshold. If he enters the Knesset with four to five seats, the ultra-Orthodox electoral strength will be preserved. But if he remains outside, it will be a big blow to the ultra-Orthodox camp, which would lose four to five seats. This could be excellent news for the center-left bloc.

Now we come to Yisrael Beitenu leader and Foreign Minister Avigdor Liberman, who suffered the worst shake-up of them all. At this point, he was supposed to be at his high point. If he were to have reached a double-digit number of seats, he planned to join forces with Kulanu Party leader Moshe Kahlon a day after the elections and demand a rotation as premier, from Netanyahu (or Herzog). But then the well-publicized police investigation began against his party’s elites, and Liberman nose-dived and crashed. As of today, Liberman is also fighting for his political life, and there is even a chance that he, too, won’t cross the electoral threshold of four seats.

It is altogether possible that at the end of the current electoral campaign, the Israeli political system will lose two of its key players: Netanyahu and Liberman, who started out together (Liberman was Netanyahu’s right-hand man and head of the prime minister’s office in Netanyahu’s first term). They may well finish together as well.

And Naftali Bennett, HaBayit HaYehudi head and Minister of Economy and Trade, who took off at the beginning of the campaign with high numbers (up to around 17 seats), now finds himself in different circumstances with only 11-12 seats. Meanwhile the Arab lists that had formerly run separately, united under the pressure of the new threshold percentage into a joint list that threatens to rake in more mandates (around 14). Thus, there is not even one player on the Israeli political map today who is in the position he thought he would be when the race began. What is left in the final sprint is to not make mistakes and to try to channel the flow of voters.

As of now, a reasonable chance exists that Herzog will be able to assemble a government and that Netanyahu will resign from political life. There is also a reasonable chance that Herzog and Netanyahu will end up with a draw, leading to the establishment of a unity government with a rotation agreement over the post of premier. And there is also a certain possibility that Netanyahu will still succeed to change course at the last minute and somehow cling to the prime minister’s office for another fraction of a term of office.

Late March 17 or early March 18, this fuzzy picture will begin to become clear. The election results will have significant repercussions on the lives of millions of Israelis, and also on the public image of Israel in the world and the geopolitical situation of the Middle East.