Israelis expect little of next Knesset

The 20th Knesset opened with a gloomy atmosphere and little hope for change, but low expectations combined with a broad-based right-wing future government could yield some surprises. 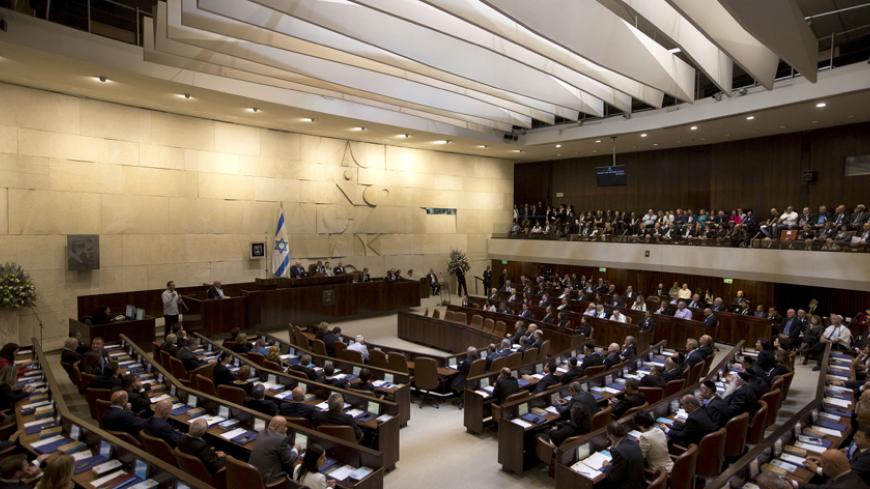 A general view shows the plenum during the swearing-in ceremony of the 20th Knesset, the new Israeli parliament, in Jerusalem, March 31, 2015. - REUTERS/Heidi Levine

One of the most memorable images from the swearing in of the 19th Knesset about two years ago, in February 2013, was the friendly whispering and exchange of hugs and pats on the back between Prime Minister Benjamin Netanyahu and Yair Lapid, chairman of Yesh Atid, Israel's second-largest party.

Lapid’s remarkable achievement, and the alliance he then formed with the chairman of HaBayit HaYehudi party, Naftali Bennett, brought a new spirit to the Knesset chamber and lit up the public's imagination. Bennett, the young national-religious man, who revived a sinking party, an officer in an elite unit and a high-tech millionaire, joined the rich, popular television star, a secular Tel-Avivian, and together they forced the composition of the coalition on Netanyahu. At first Lapid conditioned his joining the government on Bennett’s inclusion, and together they succeeded in leaving the ultra-Orthodox out of the coalition, and in winning key roles: Lapid got the Finance Ministry and Bennett the Ministry of the Economy and Trade.

The young new “power couple” of Israeli politics brought with them the winds of change of the 2011 social protest and much hope for a better future.

On the afternoon of March 31 — two years after the swearing in of the 19th Knesset — the ceremony swearing in the 20th Knesset was far less celebratory for Lapid and Bennett, and was accompanied by a sour feeling. The two of them returned to the plenum weakened after the election. Lapid lost eight seats, going from 19 to 11, and Bennett lost four of 12, for only eight. This time, Netanyahu shared hugs with the chairman of ultra-Orthodox Shas party Head Aryeh Deri, his almost certain partner in his fourth government.

Lapid is preparing for a long duration in the opposition, and Bennett, who is expected to join the next government, will do so with far less comfortable conditions than the last time. Not only that, since the March 17 election, the chairman of HaBayit HaYehudi suspects that Netanyahu is working behind his back in order to bring the Zionist camp into his government, and that at the moment of truth Netanyahu will betray Bennett and leave him out of the coalition.

The chairman of Yisrael Beitenu, Avigdor Liberman, who two years ago walked around the Knesset as the government’s landlord and was convinced that he’ll continue to hold on to the Foreign Ministry, returns to this Knesset weakened. He, too, suspects that Netanyahu is playing a double game, and that it may be that in the end Netanyahu will prefer Zionist Camp leader Isaac Herzog over Lieberman.

Zionist Camp co-leader Tzipi Livni finds herself in an even worse position. Two years ago she joined the government as the minister of justice and the leader of the negotiations with the Palestinians. Now, after years of filling senior positions and serving as the chairwoman of the opposition, she’ll be an ordinary Knesset member and will have to fight for her power and her place in the Zionist Camp party.

Netanyahu returns to the Knesset as the big winner, as all the troublemakers from his third government — Lapid, Bennett, Livni and Liberman, who even saw themselves as his successors as prime minister — are now licking their wounds from the election. The chairman of the Likud, who was called a lame duck until two weeks ago, now stands at the head of the largest party, with 30 seats — a quarter of all 120 Knesset members.

The ultra-Orthodox, like Lapid and Bennett, lost power. But unlike the chairmen of Yesh Atid and HaBayit HaYehudi, they walked around on the day of the swearing-in with smiles on their faces. They know that within weeks they’ll return from the opposition to positions of power in the government and in the coalition. In the outgoing Knesset Shas had 11 seats and Yahadut HaTorah had seven. The former lost four seats because of dynastic wars and the split between the current chairman Deri and the former chairman Eli Yishai, and the latter got one less seat. Still, with a total of 13 seats, the ultra-Orthodox parties will once again be Netanyahu’s allies. The fact that Lapid, the man who caused their exclusion from the previous government, will be out of the coalition this time apparently only added to their happiness.

Among the happy winners was the chairman of the Kulanu Party, Moshe Kahlon, the presumed finance minister of Netanyahu’s fourth government. For Kahlon, the return to the Knesset after he didn’t even run in the last election is an enormous personal victory. This time Kahlon starts with a social-leaning party with 10 seats, his own political base and an organized work plan. He’s not subject to Netanyahu’s grace anymore. Kahlon is the man of the moment, and the great expectations for social change — after the disappointment in Lapid and Bennett — are all placed on his shoulders this time. In addition, he’s expected to be a member of the diplomatic-security cabinet, a position that will add to his prestige and centrality in politics and Israeli public life. If he succeeds in weathering, in the public’s eyes, the difficult term that awaits him in the Finance Ministry and the partnership with Netanyahu, he will bring himself closer to running for prime minister.

Smiles and a sense of victory could also be felt among members of the Joint List. The Arab parties return to the Knesset as winners with a united party of 13 seats, a sense of renewal, and of course, joy in the failure of Liberman, who sank to only six seats.

The 20th Knesset begins sooner than expected, after an election that took place more than two years before its time. As opposed to the 19th Knesset, expectations are low, and just maybe — because of the lack of celebration and the relatively low expectations — it will surprise us. If Netanyahu indeed forms a right-wing Orthodox coalition with Kahlon, it will be a relatively homogenous one. Facing it will stand an opposition headed by a large party with 24 seats (the Zionist Camp), with Yesh Atid led by Lapid alongside it, who has already shown his exceptional abilities as an oppositionist in the election campaign. There will also be a large Arab party, which could conduct effective battles in Knesset committees for the benefit of the public that elected it.

As for Netanyahu, he got what he wanted. The election improved his situation, and as opposed to the last government, he will guide and decide by himself the formation of the government. Sixty-five years old and at the start of a fourth term, with the impressive mandate he received from the public, Netanyahu is the responsible adult in the room. The question that will be clarified in the next few months is whether he will keep his promise from the festive speech at the Knesset on March 31 and will create “a government that will act for all citizens of Israel,” that will patch over the rifts, unite, lower the cost of living and price of housing. In the case of failure, it seems that this time Netanyahu won’t have anyone else to blame.