By caving in to ultra-Orthodox demands to cancel religious reforms, Prime Minister Benjamin Netanyahu disregards most of the Israeli public, focusing solely on his political survival. 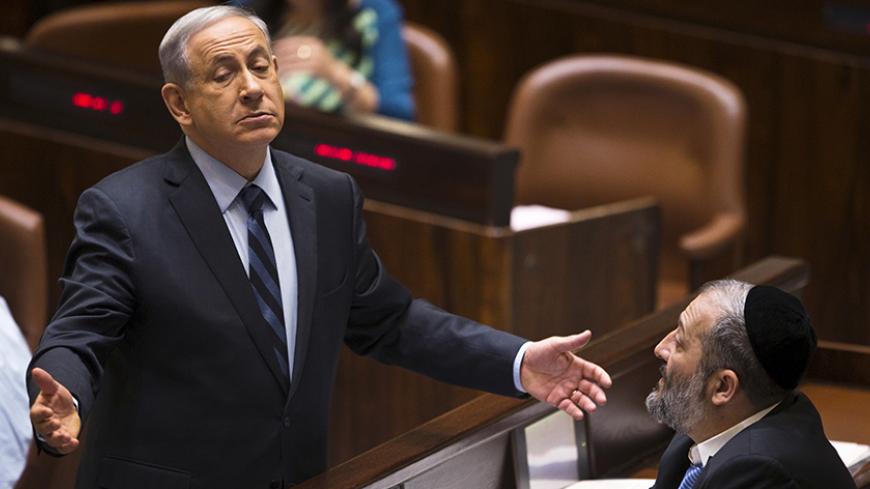 On July 5, about a week and a half after the US Supreme Court rendered its historic decision that single-sex marriage is constitutional, the reverse process began in Israel: Prime Minister Benjamin Netanyahu’s fourth government adopted a series of resolutions that void or emasculate the resolutions taken by Netanyahu’s third government, only a few months ago. The significance of these recent decisions is that the government is taking a giant step backward with everything connected to conversion, enforcing kosher food laws and the treatment of personal status issues such as marriage, divorce and family disputes. By law, the Israeli Chief Rabbinate handles personal status matters and issues kosher certificates to food factories and restaurants. In all of these domains, the government retracted its former, more tolerant resolutions that attempted to promote the more moderate streams in Judaism, and instead it handed victory over to the most conservative sector of Orthodox Judaism, represented by the ultra-Orthodox parties in the Knesset.

The inevitable conclusions regarding the resolutions of Netanyahu’s government are disquieting. While the United States continues its liberal revolution and integration of absolute values of freedom in all spheres of life, Israel is heading in the opposite direction: a state that is more religious and conservative and much less free and liberal. This is a political, demographic, social and moral victory that intensifies the sense of besiegement engulfing Israel’s liberal, left-wing and Tel Aviv elite circles. (Tel Aviv is considered by many as Israel's ''secular capital.'') This process exacerbates the reality of two totally different Jewish "states" that already exist side by side in Israel: the secular one and the religious one. The problem is that the way things look now, these two entities do not exist in mutual coexistence but in reciprocal hostility and mistrust.

The two resolutions adopted on July 5 were to transfer the rabbinical conversion courts, which render judgments according to ancient Jewish religious law, from its natural place in the Justice Department (all the other courts are there) to the ultra-Orthodox Shas Party-run Religious Services Ministry. This decision will probably make it very difficult to appoint less-extreme religious judges with a worldview allowing women to receive fair, egalitarian treatment, even in Jewish religious law, for instance. Most of the rabbinical judges who hold a more gender-egalitarian worldview are not affiliated with the ultra-Orthodox parties.

The second decision revoked the conversion reform that was accepted by Netanyahu’s previous government only eight months ago. That reform would have allowed the rabbis of Israel’s cities to establish municipal religious conversion courts (as opposed to the long-year national Chief Rabbinate conversion court) and convert new immigrants or Israelis whose Judaism could be under question. This expansion would have allowed the masses who want to convert to circumvent the rigid rabbinic courts that raise all possible barriers in front of those who want to join the Jewish religion. We are talking about hundreds of thousands of good Israelis who live in Israel and die in it, serve in the Israel Defense Forces, pay taxes and have children. The Israeli law of return grants citizenship to every Jew arriving to the country, provided that one of his parents was Jewish. The ultra-Orthodox definition of a Jew is more restrictive, hence the "masses."

But now this reform has been dialed back, and the monopoly over conversion has returned to the hands of the conservatives who have ruled this sphere for decades ­— what some people call a return to the dark ages. This process deepens the chasm between Israel and the reform and conservative communities that constitute the great majority of American Judaism in favor of the Orthodox denomination. This constitutes truly irreversible damage.

The previous Netanyahu government (2013-15) was relatively liberal. The ultra-Orthodox were not part of it in light of Yesh Atid Chair Yair Lapid’s obstinate insistence; Lapid had garnered 19 mandates, and Netanyahu could not have crafted a coalition without him. The coalition included Yisrael Beitenu Chair Avigdor Liberman, who strived for years to ease the conversion route for his constituents from the former Soviet Union (the Judaism of a large percentage of them is not recognized by Orthodox Jewry). Another coalition member was HaBayit HaYehudi Chair Naftali Bennett, representative of the religious Zionist sector — observant of the so-called modern-Orthodox stream — whose religious worldview is more liberal and accessible than that of the ultra-Orthodox world.

The problem is that the government went the way of all flesh after less than two years and, like many previous Israeli governments, opted for early elections.

To pass his conversion reform bill, then-Knesset member Maj. Gen. (Res.) Elazar Stern, at the time a member of Tzipi Livni’s Hatnua Party and a religious Zionist himself, had to pass through the Seven Gates of Hell. At a certain point it emerged that Netanyahu would not agree to support passing the Conversion Bill in the Knesset, and Stern had to make do with a government resolution alone. Netanyahu first demanded agreement of all the coalition partners, then he insisted on the explicit agreement of Bennett’s HaBayit HaYehudi faction. After they also approved, Netanyahu even demanded the concurrence of the HaBayit HaYehudi rabbis, who initially, at least part of them, held slightly different opinions on the subject.

Netanyahu knew that his liberal government with Lapid, Livni and Liberman would not last long. And now, Netanyahu knows that his historic alliance with the ultra-Orthodox is indispensable for his political survival. Due to his political needs and his desire to remain in power at any price, Netanyahu is willing to sell universal values down the river, including the "liberal Israel" sector. He is willing to violate the rights of hundreds of thousands of Israeli citizens to marry, divorce, convert, live and die freely in the Jewish state.

Paradoxically, Netanyahu himself is a secular Jew. He belittles religious practices, is not a believer and does not observe the religious commandments. He grew up in a secular family, in a secular neighborhood, was educated on secular values and attended prestigious non-Jewish schools in the United States. Thus, Netanyahu’s actions are in direct contradiction of his personal beliefs, while he exhibits inconceivable political cynicism.

All this takes place right now in Israel, despite the fact that the balance of power between the ultra-Orthodox and the secular, the right and left, the conservatives and liberals, did not undergo a significant change in the last elections. Ironically, the left-center liberal camp actually strengthened and increased its power. This was because after Eli Yishai’s extremist ultra-Orthodox party Yahad seceded from Shas Party, which he headed between 2000 and 2013, his party was not able to cross the electoral threshold and the ultra-Orthodox right lost four mandates.

The problem is that Netanyahu strengthened his electoral power on March 17, and he was charged with assembling a government. In light of the bitter experience of his third government, Netanyahu decided to revive his alliance with the ultra-Orthodox for the sake of his fourth government. He made a turn to the right toward his traditional-Orthodox "base," which won the elections for him. The ones to pay the price are the pragmatic, liberal, Western Israelis, represented by the "Tel Aviv bubble."

The current decisions taken now by Netanyahu’s government — as the first down payment to the ultra-Orthodox — are likely to rouse the opposing camp in Israel. Perhaps it will generate a series of alliances among the parties to Netanyahu’s left: Moshe Kahlon's Kulanu Party, Lapid's Yesh Atid, Liberman's Yisrael Beitenu, maybe even Isaac Herzog's Labor Party and the new "Zionist Camp." This is a true cultural war, a war that neither side is prepared to lose.