Netanyahu comes back stronger than ever

The next Netanyahu government is expected to be a nationalist, right-wing one by definition, with no forces challenging the prime minister to reopen negotiations with the Palestinians. 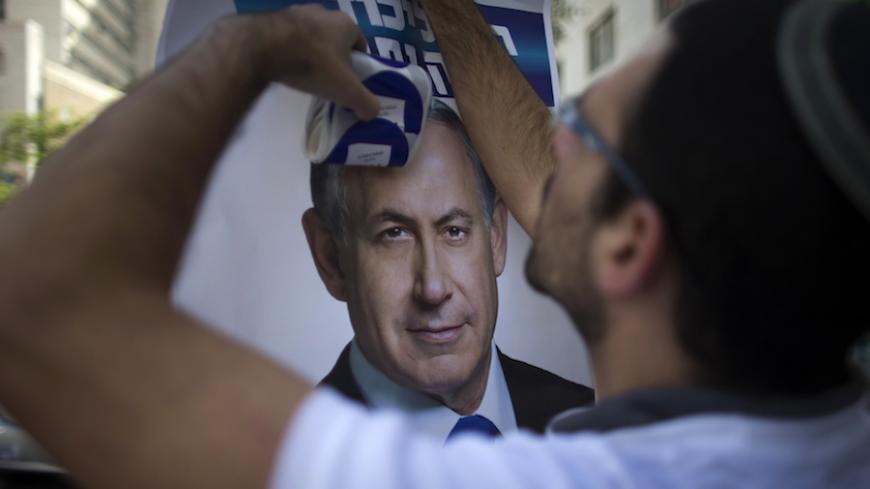 Prime Minister Benjamin Netanyahu’s fourth government, which will be sworn in soon after Passover, is expected to be one of the most homogeneous governments ever to serve in Israel. Almost all the heads of the various parties that seem likely to join the government, apart from the ultra-Orthodox parties, grew up in the Likud.

According to just about every scenario, Kulanu Party Chairman Moshe Kahlon will be the next finance minister. Until just two years ago, he was a senior member of the ruling party. Yisrael Beitenu Chairman Avigdor Liberman started his political career in the Likud. He served as director-general of the Likud Party and then as director-general of the Prime Minister’s Office during Netanyahu’s first term.

Much has already been written about the bad blood between Kahlon and Netanyahu. As for Liberman, his attitude toward Netanyahu seems to range from sheer contempt to recognition of his political skills. Liberman apparently also suspects that Netanyahu was acting behind the scenes to ensure that the corruption investigation against senior members of Yisrael Beitenu was revealed to the public before the elections. That certainly did nothing to improve the already tense relationship between the two men. For his part, Netanyahu believes that Liberman and Kahlon coordinated with Yesh Atid Chairman Yair Lapid to humiliate Netanyahu after the elections and bring about his downfall.

Yisrael Beitenu Secretary-General Faina Kirshenbaum admitted to at least part of this plan during the election campaign itself. She spoke about the intention to consolidate forces between Kulanu, Yesh Atid and Yisrael Beitenu after the election, and to enter into a rotation agreement over the position of prime minister with the leader of the Zionist Camp, Isaac Herzog. That would have sent Netanyahu home in disgrace.

Over the past few months, Liberman and Kahlon spent many long hours together discussing Netanyahu, with neither one of them hiding their contempt for the man. Kahlon hoped until the very last minute that the results of these elections would allow him to recommend to the president that Herzog be asked to form the next government. But the Likud’s unequivocal victory left him no other choice but Netanyahu.

Now Liberman and Kahlon will have no choice but to be ministers in Netanyahu’s fourth government. So will the head of Shas, Aryeh Deri, who may have announced his support for Netanyahu publicly during the campaign, but made it quite clear behind closed doors that he would have preferred Herzog.

Some of these figures also maintained direct and indirect contacts with senior members of the Likud, who were convinced that Netanyahu wouldn’t survive these elections, and were preparing to depose him immediately afterward. In one scenario, former senior Likud member Gideon Saar — who left his ministerial post and politics in November 2014 — would have returned to the party right after the election and called for quick primaries, which would have removed Netanyahu. There were even some Likud members who thought that under certain conditions, with Saar at the head of the party, they might be able to join a national unity government headed by Herzog.

The election results reshuffled the deck. Netanyahu is entering his fourth term in office as a triumphant victor. He is like the legendary phoenix, starting his new life stronger than ever. He heads the largest faction in the Knesset, and the 30 seats that he controls give him a comfortable infrastructure on which to build a coalition. Even within the Likud, his position is excellent. Party members, who up until a few days ago were cooperating openly with various behind-the-scenes efforts to depose Netanyahu after the elections, now worship him. All the internal plotting and unrest have been obliterated in one fell swoop. That is why Netanyahu is not expected to have any major difficulties in forming a new government.

To fully appreciate the enormity of the outgoing-incoming prime minister’s achievement, it is important to go back to the 2013 elections. Netanyahu was able to survive at the time by joining forces with Liberman, but he was also extorted politically by that “brotherly alliance” of Lapid and Naftali Bennett. In practice it wasn’t Netanyahu who decided what kind of government he would have. The government he had was imposed upon him. All he could do was grit his teeth and agree to Lapid and Bennett’s demand that the ultra-Orthodox parties be kept out of the coalition.

A senior minister told Al-Monitor: “Netanyahu didn’t control his own government. He was weak and easily extorted. With his 19 seats, Lapid could do whatever he wanted. People came out against him [Netanyahu] during the summer 2014 Operation Protective Edge, without any inhibitions whatsoever. Liberman pummeled him right in front of the entire world. You could say that apart from [Defense Minister] Moshe Ya’alon and [Intelligence Minister Yuval] Steinitz, Netanyahu was all alone. He was a weak prime minister from the very start of the term.” Indeed, anyone who observed Netanyahu from up close during his third term said that he was out of sorts, disinterested, isolated and depressed.

Netanyahu may have been dragged into these elections, but they are undoubtedly the best thing that ever happened to him. The very people who considered the Likud chair a dead horse and hoped for his demise will now be forced to serve as ministers in his government. Although they have some bargaining power during the process of putting together the new government, that power is limited as it is obvious to all of them that they have no other option.

This leads to the inevitable conclusion that Netanyahu’s next government will be homogeneous. It will be right-wing by nature, without the incessant bickering between the Likud and the center-left over the diplomatic process, which was so characteristic of all of Netanyahu’s previous governments. It is rather safe to assume that no one in the new government will pressure Netanyahu in that direction. Kahlon, the most moderate member of the group, will be in over his head dealing with social and economic issues. Besides, he has already announced that he doesn’t believe that there is a partner on the Palestinian side. What this means is that Netanyahu will face no internal pressure or threats on this issue, at least from within his own government. If there is any pressure, it can only come from the outside, from either the United States or Europe.

Based on all we know about its socio-economic agenda, this government is expected to be stable enough to institute major reforms. Netanyahu already proved his ability to do this, when he served as finance minister, while Kahlon also has a proven track record and a desire to succeed.

The chances are slim that a national unity government will be formed, or that Lapid will enter the coalition. Herzog is locked in place by his own party, while Lapid and the ultra-Orthodox could never sit together in the same government. Besides, Netanyahu has already said behind closed doors that he doesn’t want Lapid in his government. Netanyahu wanted governability — a functioning government — and he got it. Now, all that is left for him to do is to keep his socio-economic promises. This time, there is no one stopping him from doing that.