Prime Minister Benjamin Netanyahu might have preferred to have Zionist Camp leader Isaac Herzog within his new coalition, but will have to make do for the moment with a right-wing government par excellence. 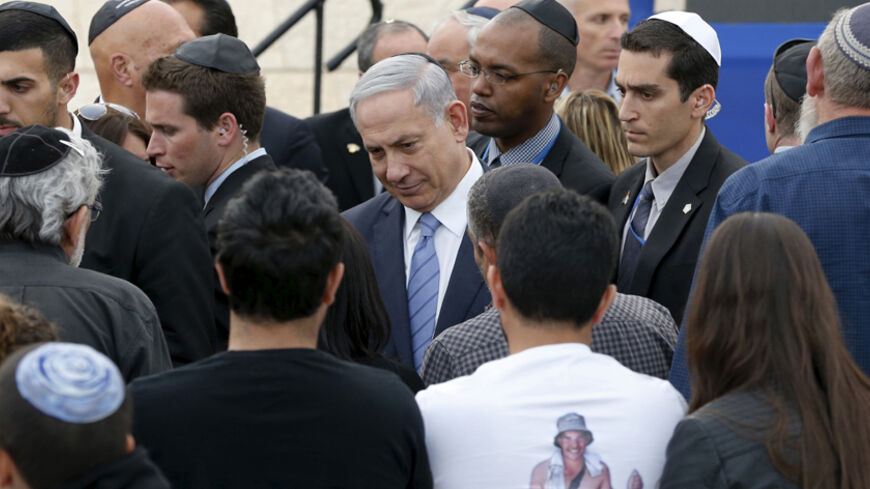 This will be the first time that, in the current political era, an ideological right-wing government is established in Israel (with slight exceptions). Although the right has ruled Israel for several decades already (with short breaks), right-wing prime ministers were careful to establish balanced governments with representatives from center, or even center-left blocs. This was true for Ariel Sharon, when the Labor Party was part of his first government (2001-2003); for Netanyahu, whose 2009 government included Labor, too; and Netanyahu’s 2013 government, which included Tzipi Livni, now co-leader of the Zionist Camp. This time, Netanyahu lacks any and all major fig leaves; he says that he is carrying out “the will of the voter.” He promised an ideological right-wing government, and he is delivering on his promise. This is a dangerous experiment, the consequences of which are uncertain. It is a shame that such an experiment is being carried out on human beings.

Netanyahu went into this escapade joylessly. True, he swore never to betray his electoral base again, but he is an experienced politician who is familiar with the international arena. He would have preferred a more centrist government, with Zionist Camp leader Isaac Herzog as the key stabilizing force in it and the “official whitewasher” of Netanyahu’s policies vis-a-vis the United States and Europe. And by the way, Herzog would also be happy to take this role, with the addition of an array of attractive portfolios and a respectable representation in the Cabinet and other policy-making forums.

Ever since the elections, there were low-key contacts between Netanyahu and Herzog; messages were transmitted, proposals were exchanged, but neither side was ready to close a deal. Both of them, Bibi (Netanyahu) and Buji (Herzog), knew that if they joined forces immediately after the elections, it might be the straw to break the camel’s back. Both of them had promised their constituents throughout the entire campaign that they would not sit together after the elections. For the first time in a long time, the Israeli public does not want a unity government. The internal opposition to unity, in the Zionist Camp as well as Likud parties, together with the fear of a harsh public backlash, is what prevented the current unity scheme from coming to fruition.

A source close to Netanyahu disclosed to me additional considerations of the prime minister. “Bibi knew that if he brought Buji into the government now, he would be living on borrowed time; the clock would start ticking toward the fall of the government. If Herzog joined the government, an immediate rebellion would erupt in the Zionist Camp party, exactly as what happened to [former Prime Minister] Ehud Barak in his time, when he decided to remain in Netanyahu’s government after the fall of [former Prime Minister Ehud] Olmert and the Kadima Party. The mutiny would have weakened Herzog and the odds were that he’d be beaten in the primaries, within 14 months. [The party’s constitution requires that the primaries for electing the party chairman must be held no later than 14 months after the elections.] In such a case, Netanyahu’s fourth government would disintegrate 14 months after its founding, if not earlier. The betrayed right would refuse to save Bibi again and he’d be dragged into elections again, under severe conditions.

“In this state of affairs,” continued Netanyahu’s associate, “Bibi preferred to first establish a narrow government as he had promised, and go with the flow. Meanwhile, Herzog will run in the primaries as a strong chairman of the opposition, and if he wins and gets another term of office, he could enter the coalition in another year and a half and save Netanyahu from the international tsunami that waits at his door. If Herzog is defeated, then Netanyahu continues in the current setup and hopes for the best.”

This is the plan, in general terms. The principle is simple: Better to bring in Herzog after the Zionist Camp primaries, and not before. Until then, we can count on "the 67 government" to lose the last remnants of Israel’s international legitimacy and start to collapse under external pressures. Under such circumstances, the Israeli public will be more forgiving should Netanyahu change the composition of his coalition to establish a unity government instead.

Let us not forget that 14 months, in terms of Israeli politics and Middle East events, is an eternity. In this time period, innumerable unexpected events and foretold catastrophes can pop up; thus Bibi’s plan can go up in smoke at any given moment.

Meanwhile, let us focus on several personalities and alignments that will constitute the skeleton of Netanyahu’s fourth government. The first is Kulanu head Moshe Kahlon, a former Likudnik who was tired with Netanyahu, resigned, founded an independent party and now returns as a strengthened, multi-jurisdictional Finance Minister. Moreover, no one, left or right, can form a government without him. Kahlon is, in essence, the new (Yesh Atid leader and former Finance Minister) Yair Lapid, but in contrast to Lapid he is an experienced, shrewd politician, realistic and calculated. He swore to learn his lesson from Lapid, who didn’t know how to get the most from the 19 seats he raked up in the 2013 elections. Kahlon already announced that he will do everything in his power to protect the Supreme Court, and has already managed to avert numerous legislative initiatives of Likud members against the Israeli High Court of Justice (Israel's highest appeal instance).

Though Kahlon is a Likudnik at heart, he holds moderate diplomatic views. In private conversations behind closed doors, he calls HaBayit HaYehudi Chair Naftali Bennett “an irresponsible hilltop youth.” It is Kahlon who brings (Yisrael Beitenu leader and current Foreign Minister) Avigdor Liberman into the government on his back, and helps him entrench himself in the Foreign Ministry. Netanyahu toyed with the idea of giving Naftali Bennett the Foreign Ministry portfolio and swearing in a minimalist government of 61 Knesset members, without Liberman. But Kahlon made it clear that he would not join such a government: As a finance minister who hopes to implement far-reaching reforms, the chances of getting them approved in a Knesset with a majority of only one Knesset member were infinitesimal. Under such circumstances, Bennett will have to make do with the education portfolio and Liberman will remain in the Foreign Ministry.

Will a political alignment form between Liberman and Kahlon? We will only find out after the government is sworn in. In the last two years, Liberman masqueraded as the responsible adult of the region. He held intimate, advanced negotiations with his counterparts in the Arab world (including such who do not have direct diplomatic ties with Israel), talked about a “regional arrangement” and put out fires in Washington. Before the elections, Liberman was forced to follow Netanyahu’s footsteps and take a sharp turn to the right.

In the last election campaign, Liberman fought a dangerous slippery slope: The criminal investigation against his party’s higher-ups that exploded just before elections seemingly eliminated his re-election chances. At the same time, Netanyahu's encroaching on his right-wing electoral pool, and the polls — which announced that Liberman would not cross the electoral threshold — kept harming him and robbing from him a great part of his electorate. Taking all of this into account, Liberman nevertheless succeeded in garnering six seats, proving that he still is a talented campaigner who has not lost his touch.

The question is what Liberman will want to be when he grows up: What Liberman will we find in the next government? A moderate Liberman-Kahlon axis could become Netanyahu’s counterweight against the extremists in the Likud and the HaBayit HaYehudi parties. The Ultra-Orthodox Shas Party head Aryeh Deri is also viewed as a relatively moderate politician, one who expresses himself calmly, who understands the limits of power. It turns out that this future right-wing government of Netanyahu could also have its complicated nuances. Should external pressures on Israel be ratcheted up in a way that inflicts real harm on the Israeli standard of living, security or economy — this may extract different kinds of behaviors even from this government, different than what it currently plans.

The first harbinger of things to come in the coming year is US Undersecretary of State Wendy Sherman’s statement April 27. She said, "If the new Israeli government is seen to be stepping back from its commitment to a two-state solution, that will make our job in the international arena [i.e., to protect Israel] much tougher.”