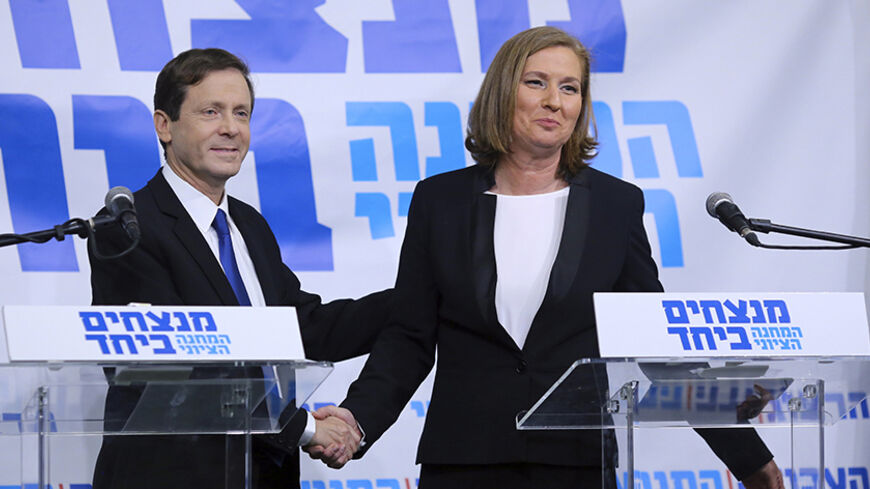 General elections are only three months away — March 17, 2015 — and the political uproar in Israel has broken its own records. Labor Party Chairman Isaac (Bogie) Herzog and the laid-off Justice Minister Tzipi Livni from the Hatnua Party organized a news conference the night of Dec. 10 in which they announced the unification of their Knesset lists and running jointly in the upcoming elections. As of this moment, the polls predict a narrow victory for this list over Prime Minister Benjamin Netanyahu’s Likud.

The surprise that Herzog and Livni kept under wraps until the very last minute was earthshaking. If the public votes for us, the duo announced, then Herzog would be prime minister for the first two years of the term and Livni for the subsequent two years. Israel has never seen such a thing before. One rotation government did serve in Israel in the 1980s (former President Shimon Peres and the late Prime Minister Yitzhak Shamir), but that rotation resulted from a tie between the two large parties. At the time, the Labor and Likud parties each garnered over 40 seats, and did not need additional parties to form a coalition. Today, the large parties have lost half their strength. Herzog and Livni would have to add four parties to a future coalition if they want to form a government together.

But the real precedent-setting reality never encountered before by the Israeli public is a two-headed party whose two leaders promise to divide up the term of office of premier equally. Just imagine an Obama-Biden ticket in which the two of them share the presidency, two years for each. How will the Israeli public digest such a proposal? Will Israeli voters, who usually go to the polling booth to vote for a specific candidate (and ignore the rest of the long list), put their faith in a method in which two politicians divide up their chickens before they’ve hatched, and offer joint leadership? This is one of the questions that will decide the coming elections.

The “affair” between Herzog and Livni began many months ago. It was conducted in the dark and then put under the spotlight on their way to the Saban Forum of the Brookings Institution in Washington on Dec. 6. They even uploaded a joint picture to Instagram and Facebook from the El Al airport lounge. Former Finance Minister Yair Lapid also courted Livni but much less enthusiastically than Herzog; the latter behaved like a prep-school boy who, for the first time in his life, falls in love with the prettiest girl in the class. Over the last few weeks, Herzog has talked about the need “to set aside one’s personal ego” and now we understand what he was referring to. Conceding half of the kingdom to Livni, even though the polls show that she won’t bring more than four seats, could be the tie-breaker of the elections. Or, it could turn out to be the most extravagant own goal ever scored during a campaign. Maybe the public will love it, maybe it will scare them off. Next week’s opinion polls will show which way the winds are blowing.

This week’s unity pact may well not be the last. Israel’s fragmented political system is in dire need of additional alliances. Next in line: Yair Lapid, the laid-off finance minister, expected by polls to lose about half his current strength in the Knesset (nine seats instead of 19); and former Likud Minister Moshe Kahlon, viewed as the great white hope of Israel’s weaker, disadvantaged sectors. Today, the surveys predict about 10 seats for Kahlon. Should Lapid and Kahlon join ranks, the result may surprise us all.

Both of them officially deny that they are pursuing contacts toward a merger, but intensive negotiations are taking place behind closed doors. Lapid is in a bad place; he’s lost his momentum and has no prominent achievements as finance minister to show off. Kahlon can be Lapid’s new growth engine.

And by the way, Kahlon has an alliance with Foreign Minister Avigdor Liberman. Both share the same enmity toward Netanyahu; both of them worked with the prime minister and left him angrily, slamming the door behind them. A political axis between Kahlon and Liberman can determine the face of the next Israeli government. If Kahlon and Lapid unite, and Liberman supports them from outside, this triumvirate could be Israel’s dominant determining factor in the coming years.

But Bibi (Netanyahu) has also not said his last word. His position in the polls is somewhere between difficult and hopeless. Only a year ago, he was marked as the exclusive and omnipotent leader “King Bibi,” whose reign would extend indefinitely; and now the man is crashing in the polls. His credibility is headed toward zero and a large majority of the public (66% in the last Maariv poll) does not want to see him serve as premier for another term of office.

To survive his predicament, Netanyahu urgently needs to leverage himself anew. Last time he did it by allying with Liberman just before the elections. His only alternative for such an alliance today is Naftali Bennett. Yes, Israel’s economy and trade minister, an extreme right-wing and religious figure, the man who once served as head of Netanyahu’s bureau and angrily quit it (mainly due to Mrs. Netanyahu’s involvement in decision-making), holds the keys to Netanyahu's continued rule.

In the polls, Bennett is almost on par with Netanyahu. The Likud revolves around 21 seats, Bennett around 17-18 seats. One more tap on the back and he overtakes his former boss. True, an alliance between them will dampen their joint political power (a whole which is less than the sum of its parts). However, it would give Netanyahu the head start he needs to receive permission from President Reuven Rivlin to try to assemble a government. In the coming weeks, Netanyahu will court Bennett as no one has done before. Bennett, who has not yet merited a visit to the prime minister’s residence on Jerusalem’s Balfour Street due to the first lady’s opposition, may very well be the one to decide Netanyahu’s fate, for better or worse.

Should Netanyahu ultimately assemble the next government, it is presumed that Bennett will be chosen to serve as defense minister. This is Bennett’s greatest aspiration. Israel’s defense minister is the legal sovereign of West Bank territory, a very old dream of Bennett’s, a position that is invested with almost unlimited power. If, indeed, there will be an official alliance between the Likud and Bennett’s HaBayit HaYehudi, it is reckoned that this will be conditional on giving the defense portfolio to Bennett after the elections. Even before we consider the probable response of incumbent Defense Minister Ya’alon, it is clear that we are talking about a diplomatic, security and political nuclear time bomb.

Anyone who viewed Bennett’s belligerent, fascinating performance during the recent Saban Forum in Washington, was left with mixed feelings. Ambassador Martin Indyk interviewed Bennett and even Indyk — the veteran, skillful and seasoned diplomat who has seen everything already — he, too, could scarcely hide his shock. Bennett enjoys a raging charisma, fluent English, power of persuasion and inner fire on the border of messianism. He tramples on all the agreed paradigms and truisms shared by most of the international community with great mirth and glee. Bennett opposes the two-state solution, he proposes that Israel annex Area C in the West Bank, he is lucid and focused and on the lookout for a good fight; he fears no one and nothing.

Naftali Bennett is Netanyahu’s clone, without the latter’s fears and inhibitions. Many people in Israel feel that the time has come to attempt this approach. Many others feel that Bennett is a wager that Israel cannot allow itself to take. One way or another, he is here to stay.