Who will replace Netanyahu as prime minister?

The main agenda of the forthcoming Israeli elections will not revolve around security issues or the economy, but will focus on removing Prime Minister Benjamin Netanyahu from the premier's seat — his rivals each running separately. 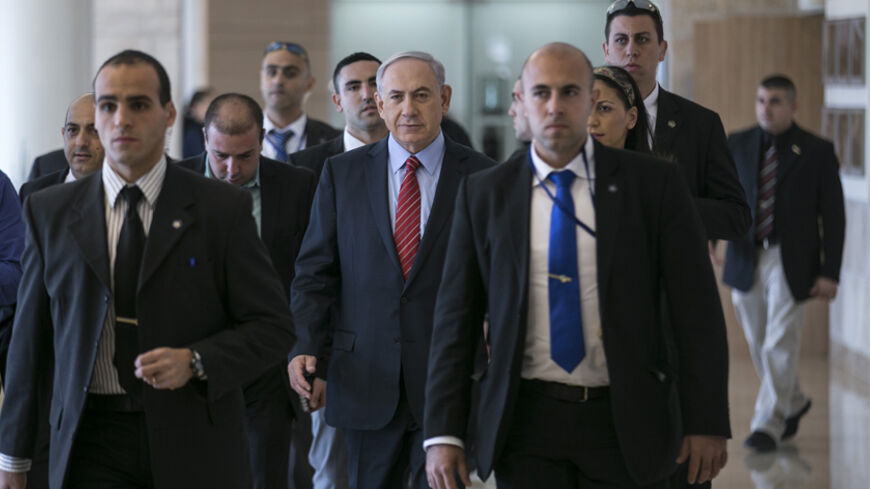 For one brief moment during Yair Lapid’s news conference Dec. 3, the newly fired finance minister shifted tone slightly as he read the carefully crafted text from his teleprompter. It happened when one of the journalists asked him whether, given all the harsh criticism he hurled at Prime Minister Benjamin (Bibi) Netanyahu during his speech, he was also prepared to make a commitment not to join a Netanyahu government after the elections.

“Look at me,” Lapid said directly to a reporter. “Benjamin Netanyahu will not be prime minister after these elections. He made a mistake, and the cost of that mistake is that he will no longer be prime minister.” As he uttered this momentous prediction, he suddenly sounded passionate and excited.

Lapid has a reputation as a courteous politician. Even in the tensest moments, he always made a point of showing respect for Netanyahu. It seems, however, that the orchestrated humiliation that the prime minister put him through this week — culminating in Lapid suddenly being fired from the government — whetted his appetite for vengeance.

The question is how far Lapid is willing to go with an “Anyone but Bibi” tactic. Would he be willing to sit in a coalition with the ultra-Orthodox parties, whom he disqualified as coalition partners after the last elections? At this news conference, Lapid avoided rejecting the ultra-Orthodox categorically, leaving the door open.

Among many of the parties competing for votes, including Lapid’s Yesh Atid Party, the agenda leading this election will not revolve around security issues or the economy. Instead, it will focus on removing Netanyahu from the premier's residence on Balfour Street, much like the atmosphere that dominated the 1999 election. What will make this campaign difficult is the absence of any single candidate considered a natural alternative to Netanyahu in the prime minister’s office.

When asked at the news conference if he considered himself a candidate for prime minister, Lapid was quick to say "yes." However, Lapid’s statement hardly corresponds with reality. The latest polls show that his party will lose almost half of its seats, and making matters even worse is that Lapid himself has earned very low marks in surveys gauging his suitability to serve as prime minister.

But Lapid isn’t the only candidate who is not considered an alternative as prime minister. Chairman of the Labor Party Isaac Herzog, Chairman of Yisrael Beitenu Avigdor Liberman, Chairman of HaBayit HaYehudi Naftali Bennett and former Minister Moshe Kahlon with his new party all trail far behind Netanyahu in polls examining who is most suited for the premiership. Even now that Netanyahu is worn down and losing strength, the distance between him and all the other candidates is vast and thus constitutes his main asset.

And yet, given the division trend of the political system, the predominant assessment is that after the next election, there will be only small and mid-sized parties in the Knesset, without a single large party. These elements, combined with the emerging anti-Netanyahu coalition, make the upcoming elections entirely unpredictable. Ostensibly, even the head of a mid-sized party could cobble together a coalition and be appointed prime minister if that person can put all the pieces together. For instance, even with just 10 seats, Liberman can bring together Lapid, Herzog from the Labor Party and the ultra-Orthodox, and become prime minister.

Another possible scenario is a rotation agreement over the premier's seat between the heads of two mid-sized parties, who manage to put together enough seats to block Netanyahu from forming a coalition. Two potential party heads to do this are Herzog and Liberman, with the latter signaling of late that he is moving from the right to the political center. What is certain, however, is that both Liberman and Herzog believe that becoming prime minister lies within the realm of possibility for them — and they have good reason to believe that, too.

Netanyahu took an enormous gamble when he decided to advance the elections. He only did that after reaching the conclusion that time was not on his side. As opposed to the 2013 elections, his public stature has eroded considerably. His opponents are organizing, and they could well surprise him with an alternative government and remove him from office without elections. Netanyahu’s use of the element of surprise proved itself, at least in this very early stage, by catching the leaders of the center-left parties off guard.

Until recently, Tzipi Livni, the justice minister fired by Netanyahu, used the illusion of a diplomatic process to justify clinging to her seat at the Cabinet table. Very soon, she will be forced to decide which side she will join. Her party, Hatnua, has been getting no more than four seats in the polls, indicating that it has apparently reached the end of the road. This leaves her with two options. She can either join Herzog and the Labor Party or Lapid and Yesh Atid. Both men believe that she can bring them another two or three seats, and in negotiations with them she can demand — and apparently receive — the No. 2 spot on their Knesset list.

What is clear now is that the center-left bloc will not consolidate its forces before the elections. Yesh Atid, the Labor Party and Kahlon’s new party will each run separately and any possible merger will take place only later. Even if the desire to overthrow Netanyahu is the glue that holds them together, feelers and initial meetings held between the parties this week indicate that these parties will run as separate lists, and only join forces after the election. The problem with them running as independent lists is that the center-left parties will end up also investing efforts and resources on competing against each other for the same electorate, which could ultimately harm them in the larger battle against Likud and Netanyahu.

This is just the beginning of one of the strangest election campaigns that Israel has ever seen. Unlike the previous election, in which it was obvious that Netanyahu would continue to serve as prime minister, and unlike all the other, earlier elections — in which two outstanding candidates competed with each other over the post — this time around there is a real chance that after March 17, Netanyahu could find himself out of office. At this point, it remains unclear as to who will take his place. Such a situation has never been seen before.