Foreign Minister Avigdor Liberman has identified this moment as a golden opportunity to determine who would be the next premier, and even perhaps become the prime minister himself. 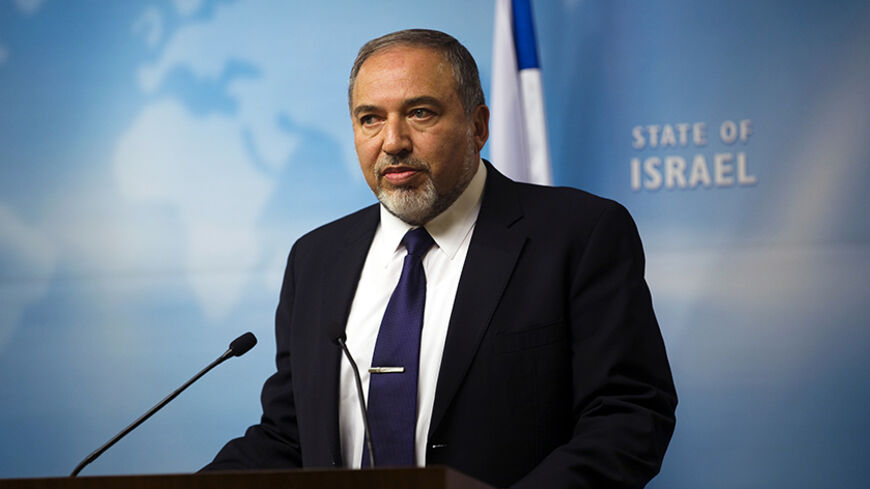 Avigdor Liberman gives a statement to the media at his Jerusalem office, Dec. 2, 2014. - REUTERS/ Ronen Zvulun

Foreign Minister Avigdor Liberman’s peace plan, revealed Nov. 28 by the Israeli daily Yedioth Ahronoth, is important for more than just its content, which is not really new and simply adapts previous ideas to recent regional developments. It shows that the Yisrael Beitenu chairman has found a one-time opportunity to replace Benjamin Netanyahu as prime minister.

Over the last few weeks, Liberman realized that the polls indicate he can no longer compete with the popularity of HaBayit HaYehudi's chairman, Economy and Trade Minister Naftali Bennett, within the right-wing electorate. He could clearly sense this trend during the days of the Protective Edge operation. He and Bennett each separately occupied the Netanyahu-opposition role within the Cabinet, portraying him as an irresolute and weak leader and challenging his position as leader of the right. But while Bennett benefited from this militant approach, calling for the occupation of the Gaza Strip, Liberman actually suffered. This outcome became evident in polls taken during the operation that showed HaBayit HaYehudi headed by Bennett receiving as many as 20 seats, while Yisrael Beitenu dropped to just 10 seats or even fewer.

Liberman, one of the most pragmatic and realistic politicians in Israel, recalculated his approach accordingly. He realized that he would have to wage a Sisyphean battle against Bennett on one side and Netanyahu and the Likud on the other over right-wing support in the next elections, and that this would be one sure way to lose relevancy and fail. On the other hand, the political center could restore him to the position that he loves most. It could make him the one person to decide who will be the next prime minister, and in one possible scenario, it could even make him the man to succeed Netanyahu as resident of the house on Balfour Street.

Toward the end of last week, as the coalition continued to crumble, Liberman pulled out Yisrael Beitenu’s peace plan, which had undergone a facelift over the past few weeks in preparation for the upcoming elections. As expected, the well-publicized release of this plan provided a pragmatic dimension to Liberman’s image, one that appeals to the political center of the Israeli electorate. According to the information released, Liberman’s diplomatic vision actually encompasses a regional peace plan with a willingness to compromise over territories. In the document, he explains that there is no choice but to abandon the idea of the Greater Land of Israel in favor of a comprehensive solution to the conflict, which encompasses the Arab world.

He goes so far as to wax sentimental while jabbing at the Likud, saying, “As someone who grew up on the belief of ‘two banks to the Jordan River,’ I can only wonder what the former head of Betar, Ze’ev Jabotinsky, would say about that. While I am not forsaking the dream or abandoning the principle of the Greater Land of Israel, it seems obvious to me that in the end, we will have to agree on a sensible compromise that will unite the people, which is the most important thing of all. That is because in the end, when debating between the unity of the people and the unity of the land, the unity of the people is more important.” Liberman is scheduled to present his peace plan to the Saban Forum in Washington next week.

This diplomatic shift to the center provides the head of Yisrael Beitenu with the legitimacy he needs to be a player in Israel's political center-left. In other words, it enables him to be a potential partner in a coalition with his ally of the past few months, Finance Minister Yair Lapid, his friend former Minister Moshe Kahlon (considered a promising contender in the upcoming elections) and maybe even his close friend Aryeh Deri of the ultra-Orthodox Shas Party, along with the Labor Party headed by Isaac Herzog.

This would be a nightmare coalition for Netanyahu. If it consolidates after the next elections, it would rob him of his fourth term as prime minister. Current estimates hold that each of these parties will come out of the elections as a mid-sized Knesset faction with about 15 seats, but as the popular Hanukkah song says, “Each one is a tiny light, but together they shine bright.” If they manage to unite, they will be a force to reckon with. What motivates most of the players in this group is their disdain for Netanyahu and their desire to overthrow him. Liberman's scorn for Netanyahu has become an open secret in the political system over the past few weeks. In private conversations with him, it is impossible to ignore his desire to toss Netanyahu out of politics once and for all.

Based on the above, under a particular scenario, Liberman, who already served as a minister in the centrist government headed by Prime Minister Ehud Olmert, could be the one factor that enables the center-left bloc to come to power in the 2015 elections. He will reach this moment well experienced and mature. He already served as foreign minister and has a rich past as a member of the most prestigious security forums of the past few years. His legal troubles no longer loom over him. So this moment is a golden opportunity for him to become prime minister, even possibly as part of a rotation agreement with the head of another party in the bloc.

At the same time, Liberman is not rejecting the option of joining Netanyahu’s fourth government, which will be a right-wing coalition by all accounts. While he has announced that his party will run independently this time, he is still an intrinsic part of the right and a natural partner in a government made up of Netanyahu, Bennett and the ultra-Orthodox parties. With this, however, the Yisrael Beitenu chairman is once again setting himself up as the person who will ultimately determine the next prime minister. It's a game that he intends to play to the bitter end, increasing his influence on both sides. It's exactly what he did after the 2009 elections with his 15 seats, leaving Netanyahu pulling his hair out as he waited to see whether Liberman would join him or the Kadima chairwoman, Tzipi Livni. Once again, Liberman is expected to be the tie-breaker between these two blocs.

Despite their troubled past, Netanyahu and Bennett have no choice but to be allies in the next elections. They will run as two separate parties, but will try not to attack each other. Bennett realizes that he is not yet ready to be a contender for prime minister, and that if he wants to continue sitting at the Cabinet table, he needs Netanyahu to head that government.

Meanwhile, Netanyahu is taking an enormous gamble by advancing the elections. While he does have some understandings with the ultra-Orthodox parties ensuring that they do not join an alternative government to remove him from power and avoid elections, he has no guarantee whatsoever that they will not join forces with the rival bloc after the elections. Furthermore, he preferred to form a coalition with Lapid instead of them in the current government, banishing them to the wilderness that is the opposition.

Frequent comparisons are being made these days between the anti-Bibi mood that preceded the 1999 elections and the current political atmosphere. Lapid is eager to wreak his vengeance on Netanyahu after being humiliated by the failing of his Zero VAT Law, Livni, now the chairwoman of Hatnua, will apparently join forces with him ahead of the elections after being humiliated time and again by the premier's diplomatic refusal and the racist legislation he promoted, and Kahlon dreams of chomping away at the Likud’s electorate.

True. There is a genuine opposition trend forming against Netanyahu, but with one major difference. Unlike during the 1999 elections, Netanyahu is not facing any rival heading the opposite bloc — no rival the public may consider a legitimate candidate for prime minister, like Ehud Barak was.

Instead we are faced with a political system more divided than ever, with no leadership alternative, even when faced with a weakened version of Netanyahu. That seems to be the argument that tilted the balance and drove him to blow everything up and go to elections now.