While Prime Minister Benjamin Netanyahu's stock has fallen and Foreign Minister Avigdor Liberman did not upgrade his position, Economy and Trade Minister Naftali Bennett was able to strengthen his support base. 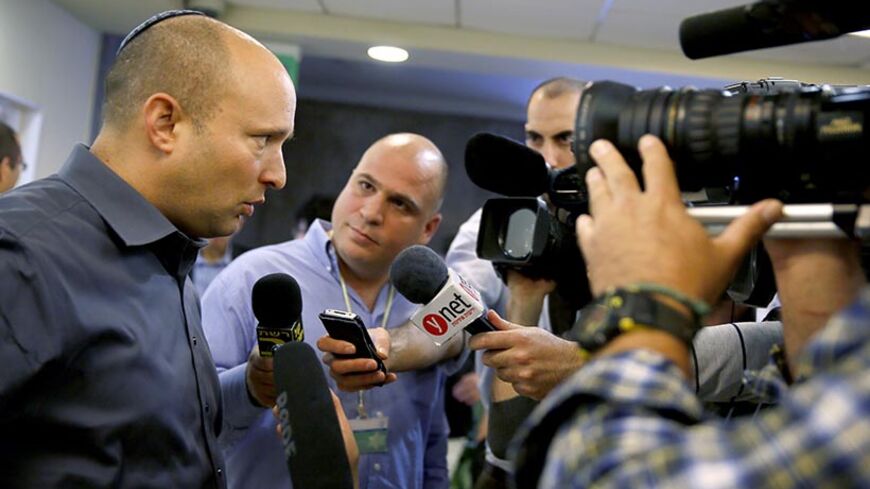 “Let’s raise our heads. This is the time to stand and salute the IDF [Israel Defense Forces] and the soldiers for the sacrifice, the devotion and the friendship they displayed during the fighting. There is no comparable army in the world, there isn’t a command it doesn’t know how to execute and we cannot survive without it.”

The author of this outpouring of national pride is the chairman of HaBayit HaYehudi Party, Economy and Trade Minister Naftali Bennett, who composed a long post brimming with patriotic love for the State of Israel on the day after the Aug. 27 cease-fire. Bennett adorned the post with the photos of dust-covered fighters taken at the height of the fighting in the Gaza Strip. As expected, Bennett’s post turned into a Facebook hit: More than 800 shares and 12,895 likes, and not just from his regular fans.

Although he didn’t spare his harsh criticism of the weakness of the prime minister and defense minister toward Hamas during the operation, somehow Bennett managed to avoid being considered a fifth column inside the Cabinet. His remarks were no less acerbic than those of Foreign Minister Avigdor Liberman, but Bennett sounded more to the point than him, perhaps as a result of his military past as an officer in an elite unit.

Bennett called for the toppling of Hamas and sniped at the prime minister throughout the fighting, attracting more and more support on the right at his expense. The reprimand he earned from Netanyahu during one of the Cabinet meetings (Aug. 20), demanding that he stop his public criticism of the government’s policy, only served to strengthen Bennett’s standing among right-wing circles.

Politically speaking, Bennett is probably the biggest winner of Operation Protective Edge. An Aug. 27 poll conducted by the Israeli daily Haaretz immediately after the cease-fire gave him 17 Knesset seats, five more than his current complement. According to the results, HaBayit HaYehudi becomes the second-largest party in the Knesset, after the Likud, leaving Liberman with a mere 11 seats.

As expected, after a significant defensive event such as Operation Protective Edge, the right-wing bloc has grown stronger and it holds 69 seats (out of 120), according to the poll (together with the ultra-Orthodox parties). This is a changing trend compared to the 2013 elections, when the two blocs were virtually tied and it seemed the radicalization toward the right had been stopped. Finance Minister Yair Lapid, who managed in the last elections to steal votes from the Likud, is losing them back to the right.

The poll also points to the inability of the center-left bloc to offer voters an attractive horizon or a leading candidate for prime minister. All the center-left parties have been weakened, according to the poll: Labor with 14 seats (compared to 17 in previous polls) and Meretz with seven (after climbing to new heights of 12 seats in previous polls); the biggest center-left party, Yesh Atid of Lapid, keeps limping along with only 12 seats, seven fewer than it got in the elections.

On the other hand, the right wing is blooming. Netanyahu still gets the highest marks in terms of his suitability for the job of prime minister, and despite the decline in his popularity at the end of Operation Protective Edge, no viable leadership alternative has emerged to challenge him in any of the other political blocs. For the time being, he is being challenged from within the right and not from without. Bennett and Liberman are his headache, and they are fighting him for the votes of the right. All three believe that this is where their future lies.

Bennett, like Liberman, worked in the past for Netanyahu. Both see themselves as future leaders of the right, after the Netanyahu era. That is why both of them eyed the Likud Party at certain times in the past as a jumping off platform for conquering their target. Before taking over HaBayit HaYehudi Party, Bennett was set to compete for a Likud Knesset seat; Liberman, who joined forces with Netanyahu in the last elections, toyed with the idea of merging Yisrael Beitenu with the Likud and running for the leadership. After being completely cleared of criminal charges in November 2013, Liberman even flirted with the center when he made moves to strengthen ties with the United States and began sounding like a diplomatic moderate — to the point where he seemed to be the most responsible adult in government.

During Operation Protective Edge, this episode of Liberman’s became a distant memory. Devoid of inhibitions, he toured the rocket-shelled communities of the south, convened impromptu news conferences and, at the height of the fighting, attacked what he termed the feeble policy of the prime minister (having dismantled his partnership with him just shortly before the Gaza campaign was launched).

Unlike Bennett, Operation Protective Edge did not upgrade Liberman. At most, he managed to preserve his strength. He will now have to face a young and attractive rival, who is setting the right wing on fire.

These days, Liberman is trying to forge a path to the heart of the right. He is undergoing a trying experience, given that some of the Russian-speaking voters have left Yisrael Beitenu having become “Israelis” and no longer considering themselves part of the so-called Russian sector.

The Knesset reconvenes on Oct. 22 after a lengthy recess. By then it will be possible to gauge the effects of Operation Protective Edge on the political landscape and to assess whether we are heading for early elections.

On the one hand, Netanyahu is outflanked on the right by strong forces challenging his leadership, even within the Likud. On the other hand, he is getting another chance to attract the votes of the center — if he decides to disconnect himself from his right wing electorate base. In all his years as prime minister, Netanyahu has proven that at the moment of truth his hold on the right-wing electorate is the strongest of all. That is why whenever he appeared to be moving to the center, he was quick to jump back into the fold of the right. It was that way after his 2009 Bar-Ilan speech and the settlement construction freeze.

History is presenting him once again with an opportunity to win over the votes of the center, if he decides to work toward a diplomatic arrangement with the Palestinians. Although he is facing leadership battles on the right, it is actually the political center that can embrace him and hand him the premiership once again.