A fresh change in Israeli politics emerges through five potential prime ministers, proposing challenging visions to the Israeli public, and some already campaigning by their growing criticism on the Gaza war and its handling by Prime Minister Benjamin Netanyahu. 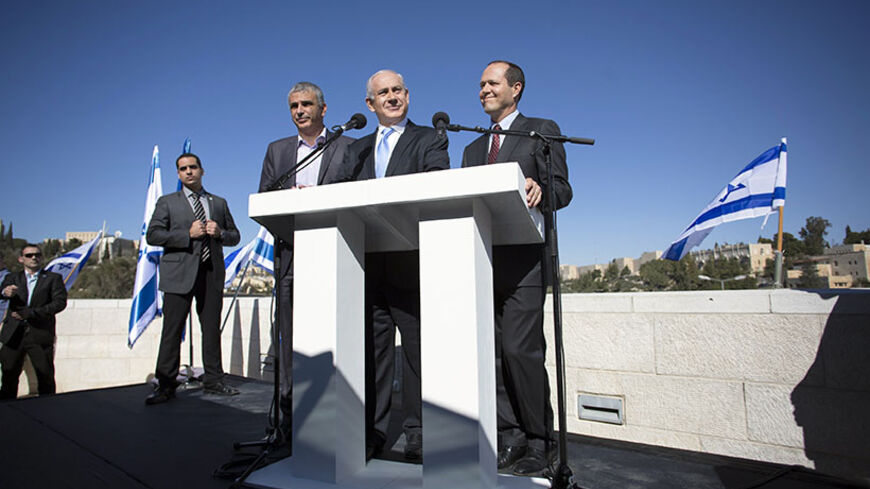 Until Operation Protective Edge, former Likud Communication Minister Moshe Kahlon did very well in the polls. Though the theoretical party headed by him had yet to be formed, it still got between 10 and 14 seats. Kahlon has made up his mind not to return to the Likud as long as Prime Minister Benjamin Netanyahu was part of it. In private talks with political insiders, he estimated that a drama could unfold in the next elections when a coalition of party leaders coalesces to oppose Netanyahu, and prevents him from serving a fourth term as prime minister.

Based on assessments, which are getting more and more established, the political fragmentation will continue into the next elections. Six parties in the Knesset will be midsized or midsized-plus, and each of the people heading those parties will be able to form the next government. Those parties are the Likud, HaBayit HaYehudi, Yisrael Beitenu, Labor, Yesh Atid and Kahlon’s new party. Under such circumstances, even if the Likud under Netanyahu had the most seats of all the parties, he could still be prevented from forming a government if those parties formed an alliance to block him. According to the law as it currently stands, the president assigns the task of forming a government to the candidate with the best chances of fulfilling that task, and not necessarily to the head of the largest party.

In those talks, Kahlon toyed with a possible scenario after the next elections, in which he combined forces with the head of one of the other midsized parties to form a bloc that would prevent any other leader of a medium-sized party from forming a coalition. Based on this scenario, he and his partner would split the job of prime minister between them in a rotation agreement, thereby bringing the Netanyahu era in politics to an end. Since then, however, the conflict between Israel and Hamas erupted, and Kahlon’s virtual party shrunk in the two most recent polls to just seven seats. As far as Kahlon is concerned, the security agenda is his Achilles’ heel.

But even in the current situation, which could certainly change, a fragmented political system — especially when the right is fragmented — is the prime minister’s worst political nightmare. It makes Netanyahu the one person whom everyone wants to topple: Economy and Trade Minister Naftali Bennett and Foreign Minister Avigdor Liberman on the right; Finance Minister Yair Lapid and Kahlon in the center, and the Labor Party and Meretz on the left. The political structure that is emerging finally does away with the traditional system of two large parties, Labor and Likud, and empowers also the leader of a midsized-plus party to become the Israeli prime minister if he is able to put together a coalition. That is exactly why Kahlon, Liberman, Isaac Herzog, Lapid and Bennett all believe that they could be the next prime minister. All they have to do is play their cards right before and after the election.

Under these circumstances, any two or more party leaders could combine forces and form a bloc that would prevent Netanyahu from cobbling together a coalition. Yes, Netanyahu constantly gains high scores compared to all the other party leaders in surveys measuring who is best suited to be prime minister. Still, even that would not be enough to help him. According to the current polls, the Likud would be a midsized-plus party with 23 seats. In other words, it would experience some growth because of Operation Protective Edge. On the other hand, that would be its high point. It can only go down from there. That is why several worst possible political scenarios are flashing through Netanyahu’s head even while he is managing the war in Gaza. One of these scenarios concerns his two biggest rivals on the right, ministers Liberman and Bennett, who came out against what they described as Netanyahu’s reluctance in managing the operation. What would he do if they decide to join forces before the next election, create a large right-wing party and steal the prime minister’s chair right out from under him? Alternately, what would he do if Lapid, Kahlon and Herzog join forces in a center-left bloc that could prevent Netanyahu from forming a coalition?

Netanyahu has been tangled up politically for the past few weeks, and the potential results are ominous for him. His rivals are taking action against him from within his own security Cabinet, and they are doing it in wartime. This leaves him feeling restrained and frustrated. Bennett and Liberman give frequent interviews, using every opportunity they have to say how they disagree with his positions and decisions, and that they believe the attack against Hamas must be much stronger. These comments are intended for voters on the right. It is having a positive effect in the polls as well, at least as far as Bennett is concerned. Netanyahu sees the chairman of HaBayit HaYehudi skipping from one media outlet to the next, including both Israeli and foreign broadcasters, and then he sees him converting this activity into political power. He sees how Liberman does not miss an opportunity to undermine him and present him as a flaccid and weak prime minister. He sees Lapid cementing his ties with senior officials in the United States and trying to become a diplomatic brand at Netanyahu’s expense. Meanwhile, he is entangled in a military operation with no clear end in sight. The wearing down in polls starts having its effect.

Given this background, it is much easier to understand Netanyahu’s caustic comments against his Cabinet ministers, during a news conference on Aug. 20. He attacked his ministers in an unprecedented manner, accusing them of criticizing Cabinet decisions and leaking them from the Cabinet meetings to the press, when they should be backing these decisions up and explaining them to the public. Most of Netanyahu’s barbs were aimed at Bennett and Liberman, who weren’t too upset about being chastised like that. In fact, Bennett made a point of saying that he will continue to express his position, objecting negotiations with Hamas.

Assuming that Operation Protective Edge finally comes to an end, its impact on the political system will become much clearer over the next few weeks, and we will have a better idea of whether the elections will be pushed forward. On the one hand, the political system is abuzz with assessments that the 2015 budget will not pass, and the country will be forced to hold elections. On the other hand, it is hard to believe that Lapid would allow himself to get caught up in an election campaign at this stage. His standing in the polls is abysmal, and he needs time to rehabilitate his image. Most of all, he needs at least one achievement that he can present to his constituents, like the passing of his proposed law eliminating VAT on the purchase of a first apartment. It also seems as if Bennett is in no rush to head into elections, but nevertheless, early elections are still a distinct possibility, especially given how cracks in the coalition are sometimes getting out of control.

In the Likud, they estimate that it is not unlikely that Netanyahu will move up internal elections for the leadership of the party. According to senior party insiders, he is looking into the possibility of doing that as a surprise move in the next few weeks to block Interior Minister Gideon Saar, who considers himself Netanyahu’s heir. Another move that Netanyahu will try to push through is amending the government's Basic Law, so that the task of forming a government is given to the head of the largest party, and not to the person with the best chances of cobbling together a coalition. This would reduce the political risk faced by the chairman of the Likud.

One thing that is absolutely certain, however, is that Netanyahu will need to spend the next few weeks working out a new path to remain in office, considering all the political threats, old and new alike, that surround him from every side. This time, no one can accuse him of being paranoid.