Livni-Herzog alliance a threat to Netanyahu 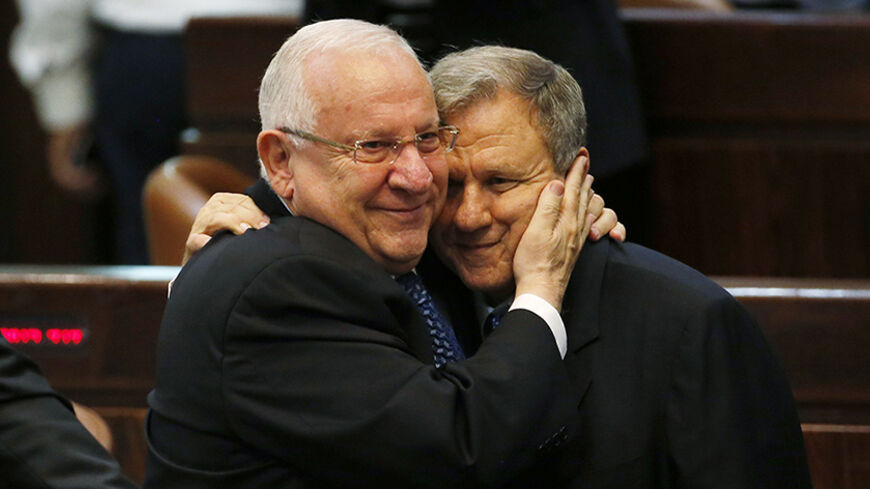 The foreign minister rushed out of the Knesset just a few minutes after he cast his ballot in the second round of voting for president. Avigdor Liberman was quickly swallowed up by his limo, which picked him up at just the precise moment to take him to the airport. He was off on a 10-day trip to Africa.

While on his way to the airport, Liberman still hoped to hear that the 10th president of Israel would be Knesset member Meir Sheetrit, a member of the Hatnua Party. From one moment to the other, that scenario seemed increasingly realistic, but it came crashing down against reality in just one short hour.

The timing was perfect, as far as Liberman was concerned. He was about to head a delegation of businessmen and Knesset members to far-off Africa, which meant that he could distance himself from the failed political gambit: preventing former Knesset Speaker Reuven Rivlin from being elected president. And, of course, it also meant he could continue distancing himself from the prime minister — his main partner at the beginning of the battle against the newly elected President Rivlin, and the man perceived as the ultimate big loser in the presidential election saga.

The fact is that the prime minister and the foreign minister, both heads of parties and in possession of built-in political power, failed to realize a relatively simple political move. They were unable to unify in time around a suitable candidate for president and to campaign vigorously for that candidate until victory. This failure testifies to the declining strength of the alliance between the two.

Actually, the cracks in this alliance first became visible even before this. The two quarreled publicly over the fact that Netanyahu didn’t consider consulting with Liberman (his “number two” in the Likud-Beitenu list) or even updating him before making his anemic announcement that he decided to support Rivlin publicly, even though this ran decidedly counter to his agreement with the foreign minister.

Liberman saved Netanyahu in the last elections and prevented him from losing control of the government by linking his party, Yisrael Beitenu, with the Likud Party. Now, however, he has become almost officially a sort of rival to Netanyahu in the next elections. What this means is that in one particular scenario, Netanyahu could fall victim to a powerful new political alliance being formed between Liberman and former Communication Minister Moshe Kahlon, who is already revving up his engines to run in the next election. Should it gather momentum, such an alliance could be politically explosive to the center-right of the political map and cause grievous damage to Netanyahu and the Likud.

Despite the conventional wisdom of political pundits in the wake of Rivlin’s victory, the prime minister’s greatest concerns do not come from the direction of Interior Minister Gideon Saar and Knesset member Haim Katz, who headed Rivlin’s campaign. This is true even though, as far as they are concerned, it was their efforts that defeated Netanyahu within the Likud. Saar does aspire to inherit Netanyahu’s position, and Katz is a significant political force himself, but the possibility of the interior minister contesting the prime minister’s leadership of the Likud Party in the next elections is slim. Netanyahu may be worn out in the Likud and its institutions, but he still holds the lead among the Likud electorate over who is most suitable to be prime minister.

Rather, Netanyahu should be much more concerned about two other scenarios that have nothing to do with any internal quarrels and schisms within the Likud.

We have already mentioned Liberman and his plans for the next election with Kahlon. This could not only bring Netanyahu down but also cause serious damage to the Likud Party.

The second scenario, which was also revealed during the presidential election, is the cooperation in the center-left bloc between Minister of Justice Tzipi Livni and the chairman of the Labor Party, Knesset member Isaac Herzog. Until just recently, Livni has been negotiating with the Palestinians on behalf of the prime minister. Herzog is the head of the opposition, and as such comes into conflict with Netanyahu on a regular basis.

The collaboration and drama that took place one day before the presidential election, when Livni, Herzog and Knesset members from both their parties acted together, uniting around the candidacy of Sheetrit, have the potential to continue well into the future. Herzog was dragged into this coalition following the sudden, dramatic withdrawal from the race of his preferred candidate, former Minister Binyamin Ben Eliezer, three days before the election. As soon as he recognized Sheetrit’s potential, however, he threw himself into the job and worked shoulder to shoulder with Livni. Other key figures in this move were Environment Minister Amir Peretz of Hatnua and a former senior Labor Party figure, and Knesset member Eitan Cabel, chairman of the Labor Party’s Knesset faction and once a close ally of Peretz. Given the circumstances, they began to cooperate once again.

This bond almost succeeded in putting Sheetrit in the president’s house. Had the ultra-Orthodox not decided at the very last minute to unite around Rivlin, Netanyahu would have found himself in an even more complicated situation. On one hand, he would certainly have been pleased to see that Rivlin, his bitter rival and mortal enemy, was defeated and humiliated. At the same time exactly, however, he would have been accused by some of the Likud members and by the right of having prevented a candidate from the nationalist camp from being elected president of Israel.

The sight of the radiant minister of justice and the pleased-looking Herzog between the two rounds of the election, when it seemed as if their candidate would defeat the candidate of the right, a supporter of the Greater Land of Israel, spoke volumes. What was seen there was the beginning of cooperation between the two parties. Behind the scenes this cooperation was even expanding to other parties in the center-left. Yair Lapid’s Yesh Atid Party also gave some votes to Sheetrit, one of the most prominent advocates of the land partition within the political system. There was even ideological cooperation with Meretz, four of whose members also voted for Sheetrit.

Although this collaborative effort ultimately failed in supplying the goods, it should still be considered successful. It revealed the hidden potential of a unification of forces among the center-left parties in the Knesset. Had the ultra-Orthodox not reneged on their understandings with the center-left — had they not decided at the very last minute that they would not be casting their votes for Sheetrit, using the meager excuse that he had taken action against religion in the past — Sheetrit would now be Israel’s 10th president. It was very close to actually happening.

After its successful baptism by fire, the Livni-Herzog axis could develop and grow stronger on the backdrop of the collapse of the diplomatic process. This should be of much greater concern to the prime minister than any victory cheers by Saar and Katz in the media.

Livni will soon discover that she is a lot closer to the Labor Party than she is to Netanyahu and Liberman, who abandoned her at the side of the road when the negotiations got stuck. Under those circumstances, feelers will be sent out again between the Labor Party, Hatnua and Yesh Atid. There will be an attempt to cobble together a new diplomatic coalition to challenge Netanyahu. (Finance Minister Lapid has already started creating his own diplomatic agenda with a left-leaning orientation.)

The saga surrounding the presidential election may finally be over, but its impact will continue to shake up and shape the political system before the next round of elections.