Why Rivlin's win is a defeat for Netanyahu 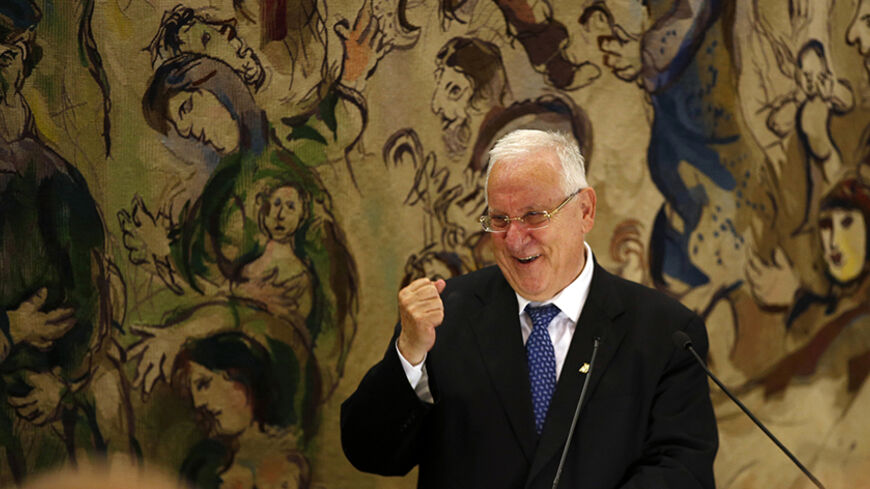 Reuven Rivlin, a former speaker of parliament, gestures during his speech after he was elected Israel's president at the Knesset, in Jerusalem, June 10, 2014. - REUTERS/Ronen Zvulun

Reuven Rivlin will serve as the 10th president of the State of Israel, after he defeated Knesset member Meir Sheetrit June 10 in the second round of voting. Rivlin, 74, born in Jerusalem and an extreme-right ideologue, is a veteran Likud Knesset member who twice served as speaker. He won despite the extensive campaign waged against him by Prime Minister Benjamin Netanyahu.

Their unstable and dysfunctional relationship is characterized by sheer hatred. Under current conditions, Rivlin’s election succeeds in delivering good news for the ideological Israeli right wing, and at the same time bad news for the leader of this same right, Benjamin Netanyahu. Israeli politics is indeed marvelous and the recent presidential campaign — full of intrigues, mudslinging and police investigations — once again verified this truism.

Rivlin was born to a deep-rooted Jerusalem family. He is the eighth generation to live in the city and his trademark is love and dedication to Jerusalem. Every radio or television interview he has given in his long career has opened with the same announcement: “Shalom to you from Jerusalem.” Rivlin was born into the Revisionist Herut movement that later became today’s Likud Party.

In contrast with a large percentage of his friends (former Prime Ministers Ariel Sharon and Ehud Olmert; former Ministers Roni Milo, Dan Meridor and Sheetrit; and many others), Rivlin never moved an inch to the left. Instead, he remained part and parcel of pure right-wing ideology in the full meaning of the word throughout his entire career.

When his political patron, former Foreign Minister David Levy, quit the Likud to found an independent party (Gesher), Rivlin remained in the Likud. When another political patron, Ariel Sharon, quit the Likud to found the Kadima Party, Rivlin also remained in the Likud. He never even looked leftward, never aligned with the two-state solution and fought against all the pragmatic inclinations that spread in the Likud in the last two decades. He did not hesitate to go out against Sharon, a longtime ally, when the latter conceived of the disengagement and proceeded to evacuate all the Israeli settlements in the Gaza Strip and four settlements in northern Samaria.

Rivlin is the first vegetarian president of Israel (for ethical reasons) and also the first president who openly believes in and supports the “one-state” concept that negates the establishment of a Palestinian state next to the State of Israel. He is not concerned about the Palestinian demographic threat.

Be that as it may, many people in the political center and left (mainly the Labor and Yesh Atid parties) voted for him, because of the sterling reputation he earned as a devout democrat. Throughout his tenure, Rivlin did not involve his political views in his conduct as speaker and espoused a “fair game” policy at all costs that did not discriminate against the left, even the radical left, in all the Knesset’s political conflicts and squabbles.

In his two terms as Knesset speaker, Rivlin earned a reputation as a liberal and a true adherent of the rule of law who always opposed delusional legislative initiatives that emerged from the right in its attempt to shackle the Israeli Supreme Court or hurt the Arab minority. Rivlin wisely integrated his avowed right-wing ideology with democratic, liberal principles. Despite his political affiliation, he was viewed over the years as the darling of the Arab Knesset members. He was gracious to them when he served as speaker, and some of them even voted for him in the recent presidential campaign.

Rivlin ran for president last time, seven years ago, but was defeated by Shimon Peres. After the last election, Netanyahu removed Rivlin from the Knesset speaker role; he was succeeded by Likud member Yoel (Yuli) Edelstein. Rivlin was pushed back far into the corner, relegated to the status of an ordinary Knesset member. However, he continued his Sisyphean presidential-candidate campaign over the last seven years with the other Knesset members.

The mutual loathing between him and Netanyahu reached such a fevered pitch that the prime minister tried to abolish the presidential institution with a special law, just so Rivlin would not be elected. When Netanyahu saw that his initiative failed, he tried to line up attractive external candidates who could defeat Rivlin. Among the names he raised was 1986 Nobel Peace Prize laureate Elie Wiesel, who rejected Netanyahu’s offer.

At the end of the day, five candidates competed in the final race after two dropped out due to being under police investigation. One was Minister Silvan Shalom, who pulled out after coming under suspicion for sexual offenses, and the other was former Minister Binyamin (Fuad) Ben Eliezer, a member of the Labor Party, who pulled out after being questioned by police for alleged financial impropriety. The file against Shalom was closed, but the investigation against Ben Eliezer is still underway.

Thus, the following five competed for the office of Israel’s 10th president: Rivlin, Sheetrit (member of the Kadima movement), Dalia Itzik (former Knesset speaker), and two external candidates, 2011 Nobel chemistry laureate Dan Shechtman and former Supreme Court Justice Dalia Dorner. In the first round, Rivlin and Sheetrit received the majority of votes, and Sheetrit seemed to have the momentum while Rivlin seemed likely to lose the presidency for a second consecutive time. But Rivlin won by 10 votes (63-53). He had tears in his eyes when he celebrated his victory. He immediately announced his resignation from the party and the political movement, announced that he would be “president of the whole nation,” and raised a toast to the State of Israel. Next to him stood a sour-faced Netanyahu bearing the body language of an orphan, who was forced to raise a toast as well. Rivlin’s victory is a resounding political defeat for Netanyahu and a great achievement for his significant rival within the Likud, Interior Minister Gideon Saar. Netanyahu has lost a lot of political ground recently and the assessment in the Likud at this point in time is that Saar will face down Netanyahu in the Likud’s upcoming primaries for the premiership. If, indeed, there will be such a contest toward the next elections, its seeds will have been planted in the Israeli ruling party June 10.