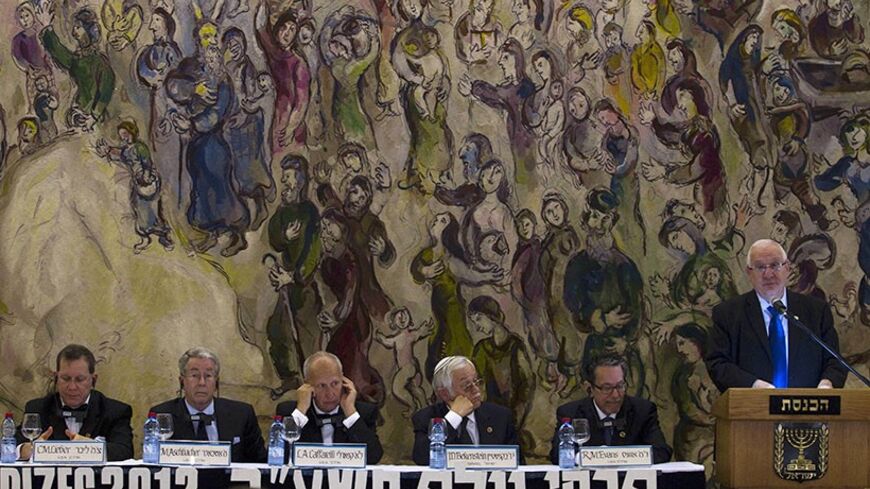 Winners of the Wolf Prize listen to Reuven Rivlin's speech during an award ceremony in the Knesset in Jerusalem, May 13, 2012. - MENAHEM KAHANA/AFP/GettyImages

In one of their many points of friction, presidential hopeful and Knesset member Reuven Rivlin heard that Prime Minister Benjamin Netanyahu and his wife Sara accused him of involvement in the choice of journalist Rino Tzror as one of the torch lighters at Israel’s Independence Day ceremony. The ceremony panel that picked the veteran, respected journalist explained that through his work Tzror “serves as a mouthpiece for those citizens who feel they are on the margins of society in Israel and raises pointed human dilemmas and painful social problems.”

This explanation did not impress the Netanyahus. It was made clear to Rivlin that Tzror is a red rag for them, because he has been leading militant battles against Netanyahu since his days as finance minister.

Rivlin tried to explain that he doesn’t know Tzror personally and that he had nothing to do with promoting his candidacy, but he did not stand a chance. He was told that Mrs. Netanyahu did not take kindly to the honors lavished on Tzror, and he was perceived as the main suspect in the case.

This anecdote, which Rivlin’s people recalled at the height of yet another day of battle in the cruel war for the state presidency, joins additional incidents and events from Rivlin’s years as speaker of the Knesset — incidents that have turned him into a “troublemaker” for the prime minister.

Attempts over the last month to find method in the madness and understand why the prime minister has run amuck to prevent Rivlin from being chosen as president, bring to mind a series of past incidents in which the Netanyahus thought he was personally hurting and humiliating the prime minister instead of supporting him.

At an opening-day ceremony of a Knesset session, when Rivlin was still speaker, Sara Netanyahu and Rivlin’s wife sat side by side and listened to an aggressive speech against Netanyahu by then-opposition chief Tzipi Livni. Mrs. Netanyahu told Mrs. Rivlin angrily that the Knesset speaker should not have allowed Livni to speak at the event.

This was a recurring motif. Sara Netanyahu reached the conclusion that the Knesset speaker was trying to please Livni and was therefore giving her opportunities to speak at central events. After the last elections, Rivlin was deposed in humiliating fashion and was left without a job. But despite it all, he believed right up until the past few days that Netanyahu would eventually toe the line of his Likud friends and support him for the presidency as the representative of the right wing.

His assessment proved wrong. Since returning from Japan a week ago, Netanyahu is fully committed to the project of thwarting Rivlin’s election. He failed in his efforts to delay the election and to draft Minister Silvan Shalom or former Minister David Levy as alternative candidates, and continues to seek a right-wing alternative to Rivlin.

As of May 23, four days before the candidacy submission deadline, the prime minister hasn’t given up. He put out feelers once again to Knesset Speaker Yuli Edelstein, who made clear that he has no intention of running for president. The chances that Netanyahu will find another Likud candidate by May 27 are slim, which is reminiscent of something late Prime Minister Ariel Sharon used to say about Netanyahu during the years of their confrontations: “Don’t touch Bibi [Netanyahu]. He’ll ruin things all on his own.”

In this case, Netanyahu might well be the man who single-handedly hands his rival the presidency. From the minute he turned the presidency into a personal issue, he gave all his opponents and haters in the Likud good reason to support Rivlin.

It’s already clear that recent events have left Netanyahu bruised and weak inside his own faction. He waged an unnecessary battle without ammunition and without proper preparation. Had he prepared himself in advance, he would likely have managed to find a worthy candidate. He could have "worked" the political scene and brought about his victory. It’s doubtful that Rivlin would have run in such a case, having already lost to President Shimon Peres in the presidential elections seven years ago.

Netanyahu's decision to abandon Shalom and Levy, after coming to understand that neither could ensure him of victory, has also taken a toll on the prime minister. Shalom’s supporters in the Likud, such as Deputy Foreign Minister Ze’ev Elkin, one of the most influential people in the party today, announced in response that they would support Rivlin. The fact that Elkin did so although he knew Netanyahu would react harshly, points to the fact that Netanyahu’s deterrence capability within his faction has been damaged.

Netanyahu comes out losing in almost every conceivable scenario. If Rivlin is chosen, it will be a severe blow for him, evidence of his failure as prime minister and chairman of the Likud to wield influence in his own party. If Labor Knesset member Binyamin (Fuad) Ben-Eliezer or some other candidate of the center-left is chosen, Netanyahu will be blamed for the right wing’s loss.

His conduct toward the institution of the presidency — his attempt to change the rules of governance on a personal whim — has already caused him significant public damage, at least in the short run. The Israeli public, parts of which already feel alienated from and disdain toward their politicians, was just given another excellent reason to feel the way it does.

At this very point, what’s missing is the voice of the new politics that emerged in the last Knesset elections. But the chairman of Yesh Atid, Finance Minister Yair Lapid, is not being heard and is not using his power to introduce a bit of sanity into this humiliating spiral. His party is the second biggest, with 19 Knesset seats. He could have tried to draft a candidate of his own from within the Knesset or from the outside, to back him up and bring about his election in accordance with the rules of the parliamentary game.

Given that there’s no single agreed-upon candidate, Lapid could have been a star. Instead, he sent a threat to Knesset member Ben-Eliezer that his faction would not vote for him because he had voted against the law regulating the compulsory military draft of the ultra-Orthodox. Thus, Lapid inserted himself into the dirty election game of poisonous personal score settling. After that, he announced that members of his faction would be free to choose whomever and that he himself would not say who he intended to vote for. In so doing, Lapid gave up in advance on an opportunity to choose a president in the spirit of the new politics that he wished to usher into Israel’s leadership.