President Rivlin protects Israel against its own prime minister

The Blue and White party's leadership fails to understand why President Reuven Rivlin is offering a solution for Prime Minister Benjamin Netanyahu to stay partially in power. 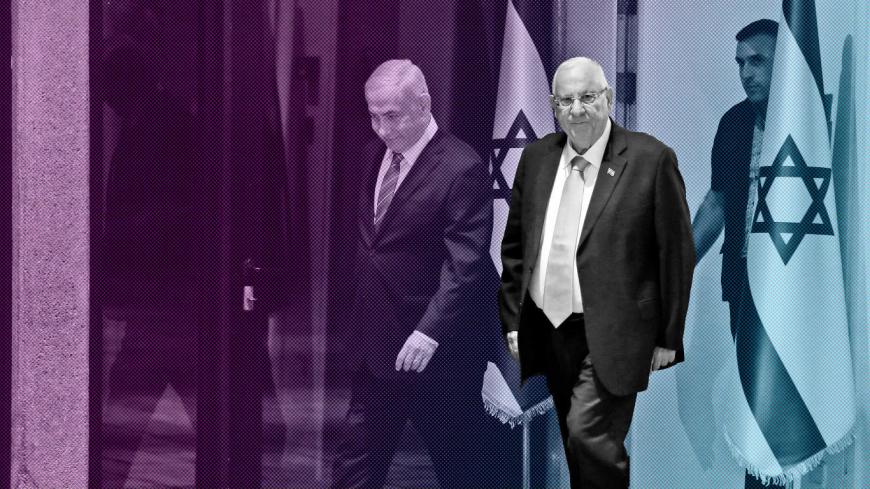 Practically anyone who had contact with Israel’s President Reuven Rivlin in the past two years is familiar with his prophecy of wrath: Prime Minister Benjamin Netanyahu will never leave his position on his own free will, the president said. Instead, he’ll burn down the club first, he won’t take POWs and he’ll dismantle state institutions and leave behind scorched earth. Rivlin addressed the progress in the criminal investigation of Netanyahu’s dossiers and felt that the prime minister would fight to the bitter end. All those who heard the president express himself on the issue discerned deep fear of the damage that Netanyahu’s struggle could bring down on the state. All along, Rivlin’s view was that Netanyahu, unlike Ehud Olmert in 2008, would not resign before the serving of the indictment.

The president’s prophecy was fully realized: Netanyahu is fighting for his personal freedom with all his might and is more than willing to hit below the belt. He is trying to undermine and shatter the institution of legal adviser to the government as well as the police, the courts, the media and his political adversaries. Netanyahu pushes the “deep state” theory regarding his alleged persecution and talks about a “conspiracy” to depose him, supposedly backed by the New Israel Fund. Into all this, two consecutive election campaigns were pushed in April and September of 2019. After all this, Rivlin found himself standing as a barrier between Netanyahu and the continuation of damage inflicted on the country’s justice and law enforcement systems. This entire burden of thwarting Netanyahu’s damage to the country was placed on Rivlin’s shoulders, and he feels he is the only person capable of squaring the vicious circle in which the State of Israel finds itself.

This perception is what led Rivlin to make his dramatic, unprecedented offer to Netanyahu and Blue and White party leader Benny Gantz in the two meetings he held with them after the Sept. 17 elections. In effect, the president suggested changing Israel’s system of government and allow the simultaneous tenure of two prime ministers in a compromise power-sharing deal: One, Netanyahu, would continue to carry the official title, live in the Balfour Street residence and carry on as prime minister. The second person, Gantz, would be appointed the prime minister’s active “interim prime minister” — a kind of substitute surrogate. This new status would be anchored in a special, new law; today, there is no obligation to appoint a stand-in or deputy prime minister. This law would enable Gantz to receive all the relevant governmental authorities and jurisdictions from the official prime minister.

This complicated setup aims to circumvent the major obstacle that currently prevents Israel from resolving the unprecedented crisis: that the Blue and White party is not willing to join the government of a prime minister who is served with criminal indictments. Therefore, Rivlin suggested that only if and when Netanyahu is indicted will Netanyahu enter the “incapacitation” category and transfer all of his powers to his substitute, Gantz.

In order to implement this plan, Rivlin offered to amend several laws — including the law enabling incapacitation. According to the proposed new law, the prime minister’s incapacitation would not be limited by time. Thus, the two sides could agree on a unity government based on a rotation agreement. Netanyahu could receive the first rotation period in the new government, while Gantz would serve as premier in the second period. If Netanyahu were to be indicted after all, he would serve only as a “ceremonial” prime minister during his term of service.

Rivlin’s submission of this far-reaching compromise proposal put him in a strange position, considering his longstanding antagonism toward Netanyahu. The prime minister had tried all he could to prevent Rivlin from being chosen as president, and when he couldn’t find an alternate candidate, he even suggested canceling the presidential institution altogether. Even after he was chosen, Rivlin continued to bear the title of “Great Satan” by the residents of Balfour Street. In fact, Netanyahu accused Rivlin of scheming the “plot of the century” together with former Likud Minister Gideon Saar to dismiss the “serving prime minister.” For his part, Rivlin did not spare Netanyahu a tongue-lashing, though he did try to retain the dignity and impartiality expected from Israel’s Citizen No. 1.

In light of all of this, Rivlin is now under fire from Blue and White seniors as someone who is trying to extricate Netanyahu from the calamities he brought upon himself. As far as they are concerned, the president’s proposal was practically a political attack against them. Blue and White seniors feel somewhat humiliated over the strange “event” in the president’s home when he summoned both Netanyahu and Gantz. Both men attended that Sept. 25 meeting, where Rivlin proposed his compromise plan. But when cameras were invited in, Rivlin and Netanyahu spoke while Gantz was left on the side to listen.

There is also something else. Immediately after the elections, Netanyahu composed a right-wing ultra-Orthodox bloc and announced that he would negotiate as head of the entire group. For its part, Blue and White refuses to negotiate with the whole bloc of parties established by the Likud. They demand that Netanyahu and his Likud party negotiate without their satellite factions, exactly the way Blue and White does not bring the Labor-Gesher and Democratic Camp factions into negotiations. “We have no doubt that Netanyahu conspires toward new elections at any price and is playing for time while trying to win the blame game,” one of Blue and White’s leaders told Al-Monitor on condition of anonymity. “We don’t believe a single word coming out of his mouth. In Blue and White’s highest echelons are two people who served as chiefs of staff to Netanyahu (Gabi Ashkenazi and Gantz) — one who served as defense minister in his government (Moshe Ya’alon) and yet another who was his finance minister (Yair Lapid). They all know how he operates. We also don’t believe that he really intends to accept the incapacitation status when he is indicted. He’ll find some way to get out of it and leave us all looking like pathetic fools for believing him.”

Blue and White does not understand Rivlin’s cooperation with “the person who tried to block Rivlin’s presidential nomination at all costs.” A highly placed Blue and White member told Al-Monitor on condition of anonymity that “Rivlin tailored his compromise plan according to Netanyahu’s measures. He is treating Netanyahu as if he won the elections. Rivlin gave Netanyahu the mandate to assemble a coalition; he’s even considering not giving the mandate to Benny Gantz even after Netanyahu fails.” Blue and White members are considering petitioning against Rivlin in the High Court of Justice should the president decide to “skip over” Gantz with the excuse that the Blue and White leader’s chances of assembling a government are very low.

Meanwhile, the pre-indictment hearing beginning Oct. 2 of Netanyahu has begun in Attorney General Avichai Mandelblit's chambers in Jerusalem. The hearing was lengthened from two to four days, according to the prime minister’s request. Dozens of lawyers from both sides are participating. Netanyahu’s strategic goal is to erase the bribery clause from Case 4000 (involving Bezeq telecommunications company) and close Case 2000 (involving Yedioth Ahronoth publisher Arnon Mozes). Thus, only two cases would remain involving “only” fraud and breach of trust. Netanyahu believes that in the eyes of the public this would turn him, the prime minister, into a victim who is being persecuted by Israel’s law enforcement system over “peanuts.” In the coming days, Netanyahu will probably return the mandate for assembling a government to the hands of the president. By law, he has 28 days to negotiate the formation of a government, and he is allowed to ask for a two-week extension. Nevertheless, Netanyahu will try to shorten the time before the third elections as much as he can. He would like this to happen before Mandelblit makes a decision on indicting him. The key individuals in this mission of Netanyahu are Mandelblit, Rivlin and political tiebreaker Avigdor Liberman.