Senior Likud members are terrified of Prime Minister Benjamin Netanyahu and won’t launch a succession war, but there are incidents that indicate some of them are testing the waters. 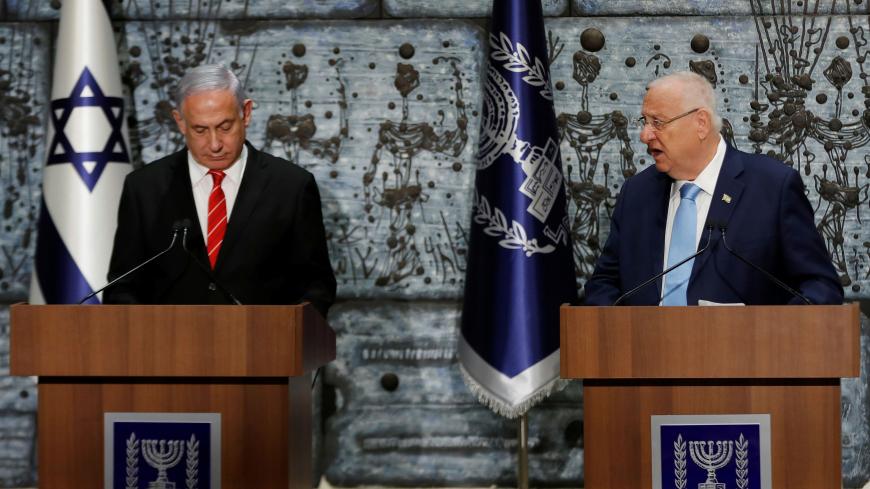 Reuven Rivlin landed the prized position of the president of the State of Israel after swimming for many years in the stormy and often murky waters of Israeli politics. Everyone knows that Prime Minister Benjamin Netanyahu is not his cup of tea, to put it mildly. Once, when he was still only “Ruvy,” the Likud legislator and loyal fan of the Beitar Jerusalem soccer club, he joked that an elephant with Netanyahu’s hide had been discovered in Africa. So why is such an experienced and savvy politician going all out to keep Netanyahu at the official residence on Balfour Street? Why is he making such efforts to find a compromise for Netanyahu and Benny Gantz to form a unity government?

Hard to believe that Rivlin truly thought Netanyahu’s rivals, Gantz and his Blue and White party colleagues would jump at the strange deal he proposed to them and to the Israeli public on Sept. 25. The president proposed a rotation agreement between Netanyahu and Gantz together with a legal change to the position of “substitute prime minister” that would grant the officeholder “full power” in case the prime minister could not carry out his duties (such as in the case of an indictment). Rivlin surely knew he was declaring the deal dead on arrival, but at the same time fired the starting gun for the race to succeed Netanyahu as Likud leader and to serve half a term as prime minister. The other half, according to the job-sharing idea Rivlin proposed, would be reserved for Gantz.

When Rivlin implored politicians to stop boycotting other parties in order to enable the formation of a unity government led by Likud and Blue and White, he was obviously not referring to the boycott imposed by the right-wing parties against the Arab parties. The only “boycott” obstructing the way to a government supported by the 65 newly elected Likud and Blue and White Knesset members is Blue and White’s refusal to join a government led by a suspect facing criminal indictment (pending a hearing before the attorney general) on charges of corruption. The bizarre idea of appointing Gantz a “substitute prime minister” with full powers in the expected event that Netanyahu is forced to take a leave of absence to deal with his indictments has nothing to do with the state’s special security or economic needs.

This patchwork arrangement was tailored to fit Netanyahu in a move that has made it abundantly clear to every reasonable person that this man, and this man alone, is driving an entire country insane. If Netanyahu had only agreed to relinquish his hold on power, Israel would have been spared two election cycles. Had he taken leave to convince a court of his innocence, Israel would have had a stable government by now based on its two leading parties.

For now, there is no indication that Netanyahu will fare any better in the 28 days allotted to him to form a coalition government than he did this past spring, when his failure to do so eventually resulted in new elections this month. The Likud has no guarantee of a better electoral showing should Netanyahu fail this time, too, and maneuver the country to a third election in the winter months of 2020. Either way, the closer we get to the deadline set for Netanyahu’s efforts without any significant progress in coalition negotiations, public criticism can be expected to soar against the person deemed responsible for Israel’s unprecedented political chaos. Leaders of the centrist Blue and White party should remind the public day in, day out that this person is Prime Minister Benjamin Netanyahu. They should keep underlining the fact that they would accept any other elected official the Likud picks to replace Netanyahu as a partner in joint leadership of the state, whether as a temporary or permanent measure.

Likud leaders who consider themselves worthy of leading the state are not blind nor stupid. They are familiar with the pending indictments against Netanyahu and despise the sycophants circling around Sara Netanyahu and the couple’s son, Yair. However, they are keeping their views to themselves and their close associates. As Netanyahu famously said of the media, “They are S-C-A-R-E-D.” Netanyahu is also scared. He has avoided appointing a substitute or successor, for good reason, although he knows such a vacuum could result in chaos should he fall ill or be unable to function.

Netanyahu is careful to surround himself with nondescript yes-people who do not threaten his leadership or overshadow him in any way, such as Ministers Yariv Levin, Ze’ev Elkin and Amir Ohana; Knesset members Micky Zohar, David Bitan and David Amsalem; and, of course, Culture and Sports Minister Miri Regev, whom he rewarded by naming her acting prime minister for his weeklong visit to India in January 2018. He has withheld senior, influential ministerial positions from senior Likud figures, among them the foreign minister, defense, finance and education portfolios. Had it not been for the intervention of the judiciary, Netanyahu would have continued to serve as communications minister, too, and would have held on to the foreign minister’s position, leaving Israel Katz to languish as transportation minister.

This week, the prime minister was forced to watch as Foreign Minister Katz took his seat at the UN General Assembly in New York, the spot so favored by the Netanyahu family. Katz does not hide his ambition to contend one day for the prime minister’s job. For now, the prestigious — and largely devoid of influence — foreign minister’s position has been unsuccessful in helping Katz overtake popular Likud Knesset member and Netanyahu family nemesis Gideon Saar. Saar leads in the polls as the favored Likud leadership successor with 31% support, ahead of Knesset Speaker Yuli Edelstein (11%) and Katz, who trails behind at 5%. Minister of Public Security Gilad Erdan is also far behind with 5%, but nonetheless never misses an opportunity to flex his muscles.

Even as Netanyahu was being forced to spend time with Rivlin (yet another nemesis) as he tried to bring him and Gantz together, Minister Erdan of the Likud was addressing a special Sept. 25 European Parliament conference against the boycott, divestment and sanctions (BDS) movement with the participation of the European Union and American commissioners in the combat against anti-Semitism. Television viewers saw him heatedly demanding to outlaw the BDS movement and stop funding its affiliated organizations. There you have it — Netanyahu is not the only one who can address the gentiles in English and get them to applaud.

And that’s not all. A few hours earlier, police officers knocked on the door of the Palestinian Authority’s Minister for Jerusalem Affairs Fadi al-Hadami. The police, which answers to Minister Erdan, was ordered to detain the minister, for planning to participate at a ceremony in East Jerusalem, tampering with Israel’s sovereignty over the city. How awful. Knesset Foreign Affairs and Defense Committee Chair Avi Dichter, who announced his intention to contend for leadership of the Likud last year (“after the Netanyahu era”), set out that morning to prove to the Palestinians who was really the boss at Jerusalem’s holy Muslim Al-Aqsa site, visiting there accompanied by police and photographers.

Which Likud lawmaker will take the first step to the president’s residence as Netanyahu’s chosen successor? Who will rise up and declare that a pledge of allegiance to the entire state supersedes the signature on a document of allegiance to the suspect Netanyahu (a document that all the Likud Knesset members signed and handed Bitan last month)? Whoever he is, he can rest assured that Rivlin will welcome him with open arms.