The composition of the Likud Knesset list, elected yesterday, reflects the color of the upcoming succession battle when and if Prime Minister Benjamin Netanyahu is indicted. 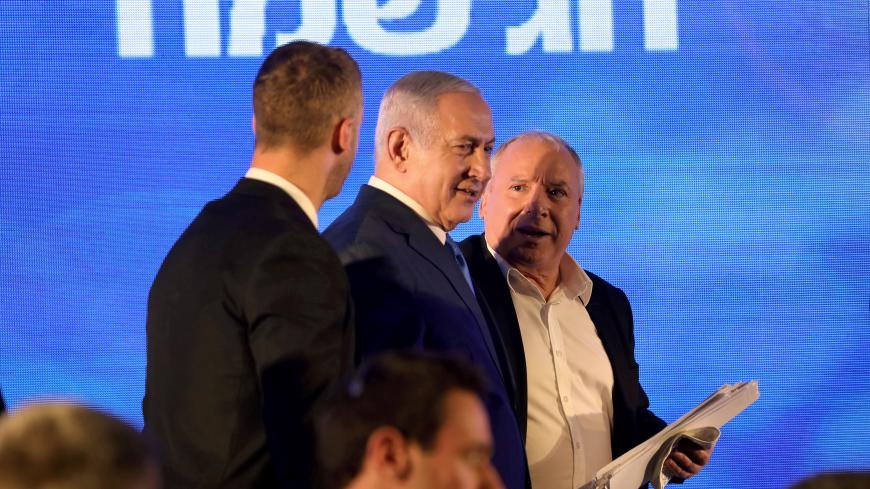 On Feb. 5, Likud members picked the party candidates for the April 9 Knesset elections, providing a sneak preview of the Netanyahu future war of succession. Knesset Speaker Yuli Edelstein, Transportation Minister Yisrael Katz, Public Security Minister Gilad Erdan and former Minister Gideon Saar took the top four slots in the primary. One member of this quartet will likely emerge as the party’s next chair once Netanyahu steps down as a candidate for prime minister.

Netanyahu did his best in recent months to undermine the prospects of his nemesis Saar, a popular Likud figure whose name comes up often as Netanyahu's likely successor. Netanyahu knew he would not be able to shun Saar aside, given his great popularity among the Likud rank and file. His explicit call urging party members not to vote for Saar in the primary appears to have had no impact either way, but it did taint Saar as a subversive — a result Netanyahu sought to ensure.

Netanyahu easily scored the No. 1 post, so he is not fighting for the party leadership. He has complete hold of the Likud, and no one — not even Saar — is challenging it at this stage. The same goes for the April 9 elections, with all polls placing the Likud well ahead of its rivals and indicating its assured victory.

Netanyahu will wage his wars in the public and legal arenas and launch them once Attorney General Avichai Mandelblit decides whether to indict him on criminal charges. Mandelblit appears likely to announce an indictment of Netanyahu on charges of bribery stemming from an influence-peddling scheme known as Case 4000. His announcement is expected before the elections, but the hearing he is required to grant Netanyahu prior to an actual indictment will probably take place after the voting.

The prime minister is preparing himself on three fronts for just such a scenario. On the legal front, he has retained the services of a battery of leading attorneys. In the public media arena, he has mounted a social media blitz and launched a dedicated online Likud TV platform. His political preparations included the party primary.

In fact, Netanyahu is setting up a political safety net, seeking to form a coalition before the elections with those who would be willing to join his next government even if he is indicted (pending a hearing). Within the Likud, he is working to quell any sign of a post-election rebellion.

His target, of course, is Saar — an ally of President Reuven Rivlin and another of Netanyahu’s bitter enemies. Netanyahu, who sees mountains where there are molehills, is worried that Saar and Rivlin are plotting to steal the elections. How would that work? By law, the president hands the task of forming a government after elections based on the recommendations of all the other parties in the Knesset to the person who has the most chances to compose a majority-backed coalition. In this plot scenario, Rivlin and Saar would enlist the support of other parties to ensure they do not recommend Netanyahu to Rivlin and would instead unite around Saar.

That was the point of the so-called Saar Law that Netanyahu failed in his efforts to enact, which would have stipulated that only party heads are eligible to form a government. Either way, Netanyahu got what he wanted: marking Saar as a plotter so that even if the unspeakable happens and Rivlin tasks Saar with forming the next government, Netanyahu will have grounds to oppose it as a plot.

Saar had hoped to come in first in the Likud primary, a spot that would have placed him as a clear successor to Netanyahu, who has held power for the past decade. Nonetheless, his results are still good, propelling him to the party’s top league after an absence of four years from the Knesset. Saar is expected to toe the line and support Netanyahu in the upcoming elections even if a pending indictment is announced, as he declared publicly numerous times in recent days.

Some 70,000 party members shaped the Likud’s Knesset candidates slate this week, picking a strong, worthy team. They kicked out several embarrassing troublemakers, chief among them Knesset member Oren Hazan — who has been detrimental to the party image — and Deputy Minister Yaron Mazuz. They catapulted new, senior figures to the Likud’s top 10. Among them is former Minister Maj. Gen. (res.) Yoav Galant, who deserted the center-right Kulanu Party to be embraced by the Likud members. Another is high-tech millionaire and former Jerusalem Mayor Nir Barkat, a prominent media figure. Also among the top 10 are two women — Culture Minister Miri Regev and Social Equality Minister Gila Gamliel, both of Mizrahi (Middle Eastern) origin — balancing out the largely male Ashkenazi (European origin) league.

This is an excellent slate for the Likud and Netanyahu, positioning at the head of a group of experienced, popular figures with a record of tangible achievements. The list also reflects a distinct, right-wing ideology in the absence of more moderate former lawmakers such as Dan Meridor and Michael Eitan. Just as importantly, it reflects a conservative legal-judicial line with almost all 10, even the most nonpartisan figures, determined to curtail the power of the Supreme Court vis-a-vis the Knesset. Tourism Minister Yariv Levin is one of the most zealous adherents of this philosophy — along with Justice Minister Ayelet Shaked — and sees himself as a candidate to replace her.

At the same time, the dominance of the settlers and the radical right in the party slate has shrunk. While everyone elected to the top 10 did so with the help of Likud members from the West Bank, their votes were not decisive. Minister Ze’ev Elkin and Deputy Foreign Minister Tzipi Hotovely, for example — both staunch settlement advocates — garnered the same support in the primary as they did last time. With tens of thousands of party members taking part in the primary and the waning power of special interest groups, nonaligned party members are as influential as the traditional wheeler-dealers (lobbyists) are.

The ruling party came through its primary with flying colors, becoming the first of the major parties to present its top team and be ready to launch its campaign. Unlike previous elections, the top Likud figures will not play an active role in the 2019 campaign unless they can serve Netanyahu’s survival needs (Netanyahu prefers to handle the election campaign himself). In this sense, Netanyahu can present wall-to-wall unity under his unchallenged leadership. No one will rise against him because the Likud never unseats incumbent leaders, and because everyone knows that while the battle of succession has begun, Netanyahu is more than likely the one who will decide which of the Knesset members will serve in his next government. If Netanyahu decides to name Katz, Erdan or Edelstein to top positions, such as that of foreign minister, he will have an opportunity to build them up against Saar.