Despite Prime Minister Benjamin Netanyahu's concentrated efforts to stifle Gideon Saar, the former minister has managed to win a top spot on the Likud’s list for the April 9 elections. 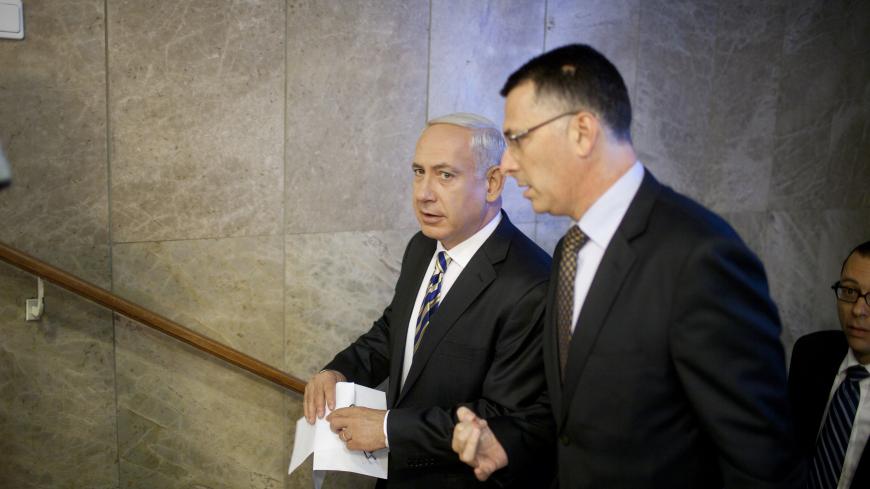 Benjamin Netanyahu (L) speaks to MP Gideon Saar at the end of a Likud party meeting at the Israeli parliament in Jerusalem, Feb. 11, 2009. - GALI TIBBON/AFP/Getty Images

The Likud primaries this week were discouraging for Prime Minister Benjamin Netanyahu. None of the high-ranking Likud officials likely know what came over Netanyahu to make him paint former Minister Gideon Saar as the enemy of the nation. Saar, who resigned from the Knesset more than four years ago, is now making a comeback. Netanyahu is obsessed with demonizing Saar as someone conspiring to bring the prime minister down.

One way or another, Netanyahu has used his extensive influence, including the dirtiest of the tricks in his arsenal, to politically eliminate Saar or at least to restrain him. Saar, who was confronted with Netanyahu’s mythological power in the Likud, scored quite an achievement, arriving reaching fourth place on the list, a dramatic blow for Netanyahu. Even the Likud voters are signaling the prime minister that his powers are limited. They are willing to follow the prime minister through hell and high water, but not everywhere.

The Likud has never seen such a phenomenon. Netanyahu stopped at nothing: First he enlisted his son Yair to make a series of toxic posts to Facebook against Saar. The young Netanyahu accused Saar and his wife, popular television presenter Geula Even, of being leftists. Saar was blamed for all the woes of the Likud and even of the entire country.

When that didn’t succeed, Netanyahu went on the offensive directly. He accused Saar of subversion and conspiracy with President Reuven Rivlin to depose him while his associates hinted that Rivlin plans to charge Saar with composing the next government if the Likud wins. Netanyahu did not let up even on the day of the primaries. “I do not retract a syllable of what I said regarding Saar,” he said into the microphones. The prime minister invested tremendous energy this past week in telephone calls and a personal lobbying campaign against Saar. Someone in the Likud told Al-Monitor that if Netanyahu had been so determined with the Iranians, Iran would have long since become a liberal democracy.

Evidently, Saar’s main sin was that he took first place in the two Likud primaries in which he participated (2009 and 2012). Another was running Rivlin for president over Netanyahu’s head and winning.

Saar, a clear-cut right-wing figure, is viewed as the only one in the Likud capable of standing up to Netanyahu when the time comes to do so. That time is coming soon, if and when an indictment is filed against the prime minister. Netanyahu is investing all of his energy into erasing any source of opposition within his home party. Netanyahu is fighting a defensive battle to nip any signs of rebellion in the bud and harness the future coalition he’ll assemble (assuming he wins the election) into letting him continue to serve in his position even during a criminal trial. In the prime minister’s residence, Saar is viewed as the only Likud member capable of challenging that outcome, not because of anything that Saar said or did, but because of his independent personality and record.

Netanyahu’s efforts failed miserably and achieved the opposite effect: Saar became the natural candidate to inherit the premiership, to Netanyahu’s great consternation. Thus, on the morning following the primaries, Saar emerged strengthened as the candidate who received the party’s votes against the express opposition of its leader. It was Netanyahu's first defeat of this magnitude in his own political home for many years.

Netanyahu’s campaign against Saar began in April 2017, when Saar announced his return to politics. Netanyahu’s initial goal was to convince Saar not to run in the Likud primaries. He failed. Afterward, Netanyahu continued to Plan B: to keep Saar out of the top ten. That did not happen either. In the next stage, Netanyahu swore to block Saar from the top five, but then had to concede defeat again.

Netanyahu has most recently shifted to keeping Saar off the top of the list. At least here, Netanyahu earned a modicum of success. However, now everyone in the Likud knows that if not for Netanyahu's valiant efforts, Saar would have reached first place. Netanyahu forced Saar to demonstrate leadership and pass a test that few would have withstood. At the same time, Saar demonstrated statesmanlike behavior by refusing to engage in an ugly mud-slinging contest. Instead he succeeded in portraying Netanyahu as the bad-guy persecutor, the image that Netanyahu tried to attach to the former Police Inspector General Roni Alsheikh and the Attorney General Avichai Mandelblit. Saar himself took on the coveted role of the persecuted.

If Mandelblit ultimately indicts Netanyahu (which seems to be inevitable at this point) toward the end of the current year, it will be a windfall for Saar. Other contestants will be Transportation Minister Yisrael Katz, Knesset Chairman Yuli Edelstein and perhaps Minister of Public Security Gilad Erdan, all of whom scored in the top five. Another name to remember is tech millionaire and former Jerusalem Mayor Nir Barkat. The next Likud leader will evidently be someone on this list, and the changing of the guard will probably take place in the course of the year.