Can Netanyahu plug the first hole in Likud's wall?

Only Gideon Saar has dared to publicly challenge Benjamin Netanyahu for leadership of the Likud following the prime minister's indictment for bribery. 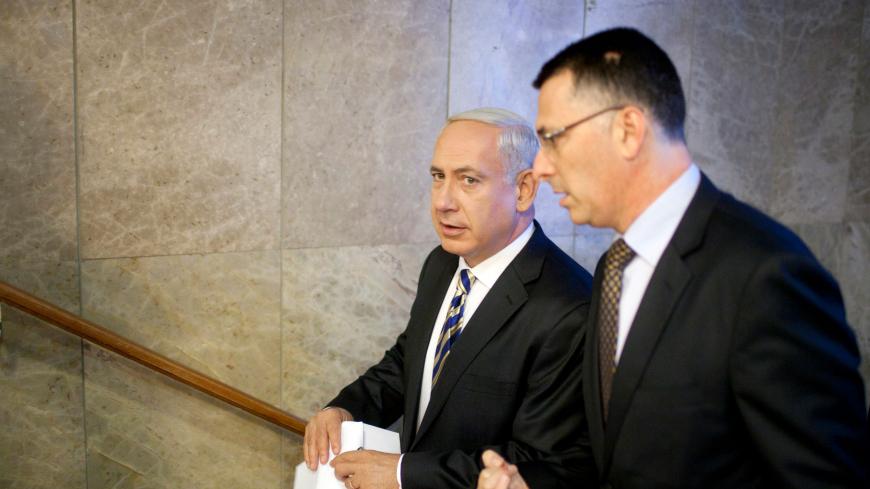 Likud senior Gideon Saar has been working nonstop after dropping a political bombshell the night of Nov. 23 by calling for a quick Likud primary. Since then, he has been ramping up his challenge to Prime Minister Benjamin Netanyahu one hour to the next, lashing out incessantly and reminding him that he has failed to form a government, twice. In a radio interview on Nov. 26, Saar said that if he were in Netanyahu’s position, he would resign. With that, the tempest Saar stirred up in the Likud quickly escalated into all-out war. The party hadn’t experienced a challenge to its leadership in years, and suddenly, all the pent-up passions and energy exploded.

All of this is set against the backdrop of a political and constitutional crisis of historic proportions in Israel, given Netanyahu’s insistence on hunkering down as prime minister despite Attorney General Avichai Mandelblit’s decision to indict him for bribery, coupled with a rush toward a third round of elections. Saar added another element to the political tailspin, coming out against Netanyahu in ways that haven’t been seen in the Likud in ages, all the while stressing that only he himself can save the party from crashing. In doing so, Saar shattered the public image of unity that had worked to Netanyahu’s advantage when he was suspected of and being investigated for criminal activity.

The timing of Saar’s attack — after Mandelblit had announced his decision to indict — was unexpected. Saar is now viewed as bold and has earned considerable praise for his actions from outside the Likud. On the other hand, many Likud Knesset members and activists disapprove of his attack on the prime minister, so they have either defended Netanyahu or remained silent. So far, only one new Knesset member, Michal Shir, has expressed support for Saar in the media. Knesset member Yoav Kisch expressed support for holding primaries, but did not go into details or say whom he would support. There is talk of mayors and even other Knesset members who will soon come out of their closets and in support of Saar. There has been no sign of them yet, with the exception of Ramat Gan Deputy Mayor Roi Barzilai, who made a public statement on Nov. 26 calling on Netanyahu to resign.

What has happened so far, however, should be of concern to Netanyahu. The internal unity that solidified his position within the Likud and bolstered his substantial popularity despite the criminal charges hanging over him is withering away before his eyes. Saar’s move threatens to suck the Likud into a vortex of internal squabbling, engulfing the party’s most senior members.

Foreign Minister Yisrael Katz, who sees himself contending for leadership of the party after Netanyahu, accuses Saar of having “crossed a red line.” “He appears to be setting the stage for a split in the Likud,” Katz asserted. One of the most popular and influential ministers on the Likud Central Committee, Katz views Saar as a political rival and will do everything possible to hinder him in a party primary. In a personal missive to Likud activists Nov. 26, after Saar had called on Netanyahu to resign, Katz wrote, “As I have already announced, I support Benjamin Netanyahu. Should we be forced to hold another round of elections, I will do everything I can to prevent him from being deposed.” His statement also insinuated that Saar was helping collect signatures to lay the groundwork for a government headed by Blue and White leader Benny Gantz and the left. The Likud is worried that Saar is really planning to reshuffle the deck by trying to split the party. That is how suspicious they are of one another in the Likud.

Minister Miri Regev also lashed out against Saar, accusing him of “shooting at the Likud convoy from the inside,” so the shot would ricochet, and of stabbing Netanyahu in the back. Knesset member Nir Barkat, who also plans to run to head Likud, accused Saar of leading a “putsch.” Inevitably, this set off a Twitter war between the two men.

The “Saar effect” had not gathered much momentum as of the morning of Nov. 26. He is almost a singular figure in the anti-Netanyahu opposition. Not one top cabinet minister has sided with him. On the other hand, senior Likud officials, among them Internal Security Minister Gilad Erdan, have yet to break their silence. They are waiting to see which way the wind blows. Knesset Speaker Yuli Edelstein, who had kept silent until now, published a joint message with Netanyahu on Nov. 26, calling for preserving Likud unity. With that, Netanyahu thwarted the possibility of another Likud senior coming out against him.

If anyone knows which way the wind is blowing, it's the heads of local government and Likud offices, places where Netanyahu continues to enjoy enormous support. Most of them still share the party's DNA, which dictates that a serving prime minister must never be deposed. They continue to see Netanyahu as a popular and highly regarded leader and claim that he is being hounded by the legal system and the left. He holds a lot of weight with them. On Nov. 25, Netanyahu attended a gathering of Likud local government heads and received considerable support. One point that came up in private conversations is that even among those who think it is time for Netanyahu to go, they continue to oppose deposing him from within, because it would be a mortal blow to the party.

On Nov. 25, a senior Likud official who supported Saar’s return to political life told Al-Monitor on the condition of anonymity, “Gideon Saar made a big mistake. He came out too early. I told him a year ago that he doesn’t need to do anything. He is the next head of the Likud. All he had to do, is wait patiently and let things happen. He didn’t listen. I think he acted from his gut, and in doing that, he hurt himself and the Likud.”

While Netanyahu prepares for a third election, he has succeeded in blocking Saar’s demand for a flash primary. Saar had hoped that he would be able to convince Likud voters to elect him if only to sidestep a third election and after that to easily form a new government. Then Netanyahu agreed to a primary in six weeks, which means after the current Knesset is dissolved. This should give him some peace and quiet within the party. Although Netanyahu has yet to respond directly to Saar, he has attacked him by proxy, with people close to him accusing Saar of subversive behavior and betrayal.

It looks like Netanyahu is waiting to gauge the public response to him at a Tel Aviv rally the night of Nov. 26. Likud Knesset members and ministers have been ignoring his request to take part in it, but this should not be interpreted as a challenge to Netanyahu per se. In any event, Netanyahu would rather see Saar wear himself out in his squabbling with Katz, Regev and Barkat. This way, he can ensure that under no circumstances will he have to face off against Saar.

If anyone is benefiting from the current chaos in the Likud and stands to profit from it in the election, it is the Blue and White. Gantz's party remains united despite internal debates over whether to join a unity government with Netanyahu. In contrast, the Likud is now caught up in bloody internal fighting.