Netanyahu at war with legal system

Prime Minister Benjamin Netanyahu might be standing now with his back against the wall, but he still succeeds in keeping his supporters on his side. 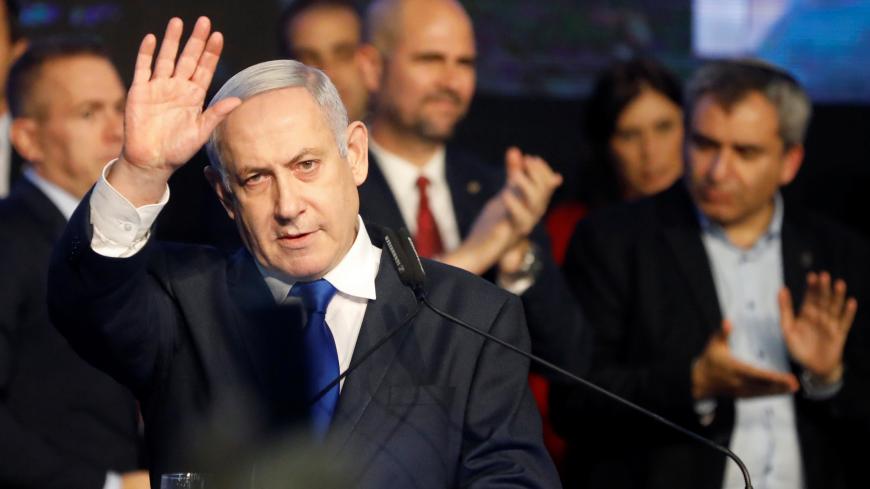 On the evening of Nov. 21, Prime Minister Benjamin Netanyahu went from being a suspect in a bribery case to being indicted for the charges while still serving as prime minister. Over the next few days, he will face a first dramatic test within the Likud to see if he can survive the indictment. If indeed Likud members continue to follow him, their sentiments would form the basis of a third election campaign, led by Netanyahu himself. It would be a campaign portraying him as the victim of an attempt to launch a coup against the right. It is, in fact, how he sees things.

All of this is unfamiliar territory, never seen before in the State of Israel. This is the first time that a prime minister seeking to be reelected has run for office while facing such serious charges — or any charges whatsoever, for that matter. Never before has the formal legal system been asked to determine whether such a person can even be tasked with forming a new government.

Netanyahu himself plans to fight for his right to be reelected, arguing that in a democracy, only the public can decide on his future, and that by law, he is presumed innocent. But before he can set off on this battle, not knowing how it will end, Netanyahu will need a united Likud party behind him — or at least most of the Likud party. As of Nov. 22, not one senior Likud official has gotten up to demand his resignation despite the serious charges against him.

Netanyahu is now reaping the fruits of the longstanding and close bond he has built over the years with his Likud base. Likud voters feel an emotional connection to him. Likud Knesset members and ministers tested this mood after Attorney General Avichai Mandelblit’s announcement and Netanyahu’s “Persecuted Victim Speech.” Once they realized that public sentiment in support of Netanyahu was strong and key groups in the Likud identify with his claims that he is the victim of an attempted coup allegedly by the legal system, they came out with statements in support of the prime minister. This list of supporters included ministers Yariv Levin, Ze'ev Elkin, Amir Ohana, Ofir Akunis, Miri Regev, David Amsalem and Israel Katz. Conspicuous in their failure to express support were Likud senior Gideon Saar, Speaker of the Knesset Yuli Edelstein, and ministers Gilad Erdan and Yoav Galant. The first two plan to run against Netanyahu in the primary for Likud party leadership. That is something Netanyahu can no longer avoid, especially after he himself toyed with the idea of a primary in early October. He can no longer claim that it is just an attempt to depose him.

Knesset member Miki Zohar, who serves as chairman of the coalition, spoke out in defense of Netanyahu too. Having grown close to Netanyahu recently, he used a Friday morning interview with Army Radio to give voice to the mood around Netanyahu. “No one would dare try to rise up against the elected leader of the movement,” Zohar said, adding, “There may be those who want to run against him for the leadership position, but they will lose big time in the Likud primary, and Netanyahu will be the Likud’s candidate for prime minister again in the next election.”

At the same time, WhatsApp groups of Netanyahu supporters have started organizing a demonstration for the night of Nov. 23 under the defiant slogan “Stop the coup!” This will be the main theme in the Likud’s campaign if Netanyahu does, in fact, lead the country and the Likud into a third round of elections.

Even before Mandelblit delivered his dramatic decision, Netanyahu was putting together a three-part strategy for the next election.

The first part involves blaming Blue and White party leader Benny Gantz and that party’s No. 2, Yair Lapid, for preventing the formation of a unity government. It now looks like this claim is irrelevant. The option of forming a unity government was taken off the table once Gantz returned his mandate to the president. Once Mandelblit made his announcement, it was dead and buried. There is no way Gantz will partner with someone accused of bribery.

The second is attacking Gantz on ties with Arab legislators. The campaign will criticize Gantz for his supposed ties with the Joint List — a unified slate of predominantly Arab parties — and his supposed attempt to form a minority government. Here too, Netanyahu checked with focus groups and polls, leading him to the conclusion that this was a weak point for the party of chiefs of staff (three of Blue and White’s seniors are former generals). Netanyahu will exploit this in his campaign, arguing that the Blue and White party put Israel’s national interests at risk at such a sensitive time security-wise.

The third is lashing out at the legal system. The way things look now, this will be at the heart of Netanyahu’s campaign. He delivered his opening salvo in his speech Nov. 21 when he spoke about how the legal establishment made up cases. He then offered examples of selective enforcement of the law while deepening the sense that his interests are the same as those of right-wing voters. This was the most crucial component of all. “This evening we are witnesses to an attempted government coup against the prime minister, using false allegations and stained investigations,” he declared. A significant part of the Israeli public identifies with these sentiments.

Will this be enough for Netanyahu to keep his Knesset seats? A poll by Channel 12 News, which was released in the evening on Nov. 21 but conducted before Mandelblit made his announcement, showed that his position was stable and that the Likud under him even grew a bit stronger, winning an estimated 33 seats. According to this poll, Blue and White under Gantz would also win 33 seats. Netanyahu’s most urgent task now is to keep the same high number of seats in the coming polls. These seats are his security net and the key to his victory over Saar in a primary, if such a primary does, in fact, take place.

No less important is the support for Netanyahu among the right outside of the Likud. Here too he has the support of politicians and opinion-makers, at least at this stage. This is not some esoteric group. One example is media figure Shimon Riklis, who is particularly active on social media and whose Twitter account has about 94,000 followers. On the morning of Nov. 22, he tweeted: “The plotters think that if they get rid of Netanyahu, they will also get rid of the other groups that make them uncomfortable: the ultra-Orthodox, the settlers, the Mizrahim, traditional Jews. They are so wrong. We are here, we are stronger than ever and we will only get stronger.” Former Justice Minister Ayelet Shaked and Defense Minister Naftali Bennett stood at Netanyahu’s side too. On her Facebook page, Shaked gave a legal explanation as to why Netanyahu could form the next government.

Netanyahu is setting off on a legal and political battle with his back pinned up against the wall like never before. As long as it remains up to him, he will turn his entanglement in criminal indictments into a war waged by the legal elites and the left against his right-wing government. It is his only remaining option.