After indictment, Netanyahu scores well in polls, but Gantz does better 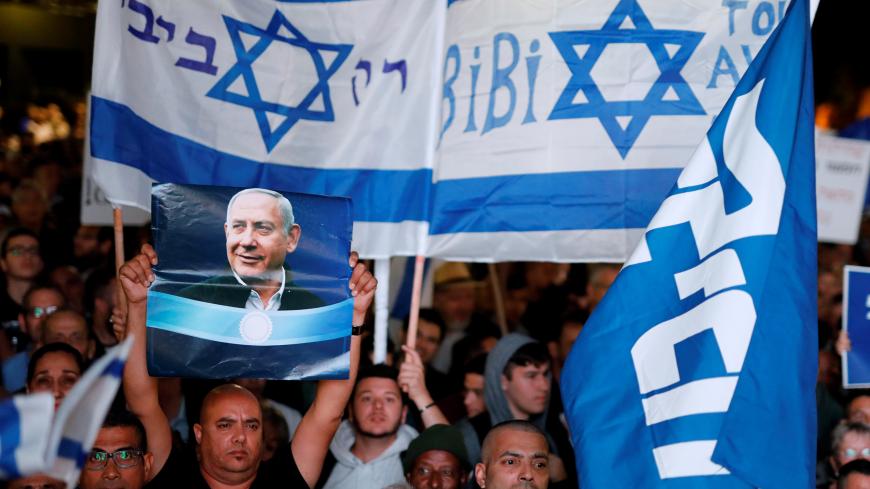 There were two conflicting interpretations of the demonstration of support for Prime Minister Benjamin Netanyahu at the Tel Aviv Museum plaza on the evening of Nov. 26, both of which were accompanied by different descriptions from the ground. One emphasized the absence of most of the Likud ministers and Knesset members from the demonstration — only three attended (Culture Minister Miri Regev, and Knesset members Miki Zohar and Shlomo Kari) — and the disappointment at the small turnout of demonstrators, which numbered only a few thousand. In the second interpretation, it was an impressive show of force of 15,000 demonstrators — information that was also disseminated on social media by means of the prime minister’s accounts to his millions of followers.

The slogans and signs raised at the protest were also framed differently. Right-wing opinion leaders on social media wrote posts and tweeted about a spectacular show of democracy by a public that feels Netanyahu is persecuted with the aim of bringing down right-wing rule, and they spoke of a judicial system that employs the targeted assassination of democracy. Media and academic figure Gadi Taub, who was one of the speakers at the demonstration, tweeted the next day: “You have to lack a conscience to call those who actually protest ‘enemies of democracy.’”

On the other side, a shameful video was circulated that showed the political analyst of the Kan network Yoav Krakovsky attacked by several protesters who yelled “Die, leftists,” with signs in the background calling for the arrest of state attorney Shai Nitzan.

Knesset member Asaf Zamir of Blue and White, formerly the deputy mayor of Tel Aviv, mocked the protest and claimed that in his experience producing events in the city, he can determine responsibly that “there were between 3,500 to 5,000 people there tonight. Not one more … it seems that most right-wing voters prefer the state over Netanyahu after all.”

So who was right and how does all of this impact Netanyahu’s chances of continuing to lead the Likud in the next election, which right now looks inevitable?

After intensive wandering around social networks and checking tweeters from here and there, my conclusion is that about 5,000 to 10,000 protesters attended the demonstration. Among them were diehard Bibi-ists (Netanyahu fans), but also Likud folks from the Mizrahi periphery who came independently, settlers and religious Zionists. Knesset members who didn’t attend didn’t make much difference either way since Netanyahu continues to talk over their heads directly to the public that’s connected to him. As long as he succeeds in maintaining his electoral power, they’ll fall in line.

Thus, the more important event that happened on Nov. 26 as far as Netanyahu was concerned was the polls that were published. These showed that even after he turned from suspect to accused of bribery (after the indictment announcement on Nov. 21), he maintains the Likud’s power and even strengthens it a little. A Walla News poll predicts Blue and White would win 34 mandates and Likud 33. A Channel 12 news poll published during the protest predicts the same result. This poll also tested the strength of Knesset member and senior Likud member Gideon Saar, who has challenged Netanyahu. According to the poll, if he stands at the head of the Likud, the party would lose mandates and sink to 26, while Blue and White — headed by Benny Gantz — would grow to 35 mandates. This isn’t a bad result for Saar as a starting point, but it's not good enough to convince senior Likud leaders that the time has come to part with Netanyahu.

Netanyahu couldn’t have asked for better polls, as he’s at a low point publicly: With the indictment announcement on Thursday night, he has become a prime minister charged with taking bribes. Thus, as long as he succeeds in maintaining these numbers, the chances decrease of a government forming without him in the few remaining days until the dispersal of the current Knesset and the start of the third election cycle. In this situation, most of the chances are that Likud primaries would be held in a few weeks, in which Saar would run against him, and perhaps others as well. If at that time Netanyahu continues to be popular in the polls, it would seem he’d be the one to lead the Likud in a third election.

Indeed, in back rooms, Likud leaders know it’s an end of an era. But no one can point to an exact time. This is the reason most of them are closing ranks around Netanyahu or keeping silent so that Saar still remains alone. Another, perhaps key, reason for this — and this is also only said in back rooms — is the feeling in the Likud that Netanyahu is a victim of choosy enforcement. Ministers like Miri Regev and David Amsalem openly portray Netanyahu as a victim, but there are others who are silent but also believe that the Netanyahu investigation is “tainted.” This is a significant point because it corresponds with the Likud and right-wing electorate that identifies with this feeling.

More than a million Likud voters are not a herd and must not be depicted with such terms. This is a broad public that remains strong in its support for Netanyahu, and the reasons for this don’t matter right now. It’s a sentiment. If it continues to accompany us in the third election, the State of Israel could once again find itself in an inconclusive situation.

At the same time, there’s another process — which mirrors Netanyahu’s. Blue and White’s Gantz is growing stronger in all parameters: in polls that show 34 mandates for Blue and White, in the percentage of people who see him as fit for prime minister compared to Netanyahu, in his undisputed leadership of Blue and White and the broad public that identifies with him emotionally.

Indeed, since Gantz entered politics he has shown an impressive learning curve. A senior figure in the public service who saw him this week told Al-Monitor on condition of anonymity, “A year ago he was totally green (a novice). The last few months [were] good for him. He’s learning, asking and writing. You see that he has progressed. He’s something totally different. He’s very confident and very focused.”

According to the polls, Netanyahu is expected to be elected head of the Likud in the primaries, but he must be worried about Gantz. To the extent that the demonstration this week was the opening shot of his next campaign, as a persecuted man railing against law enforcement, tossing aside any shred of decorum, Gantz could benefit from the votes of the soft Likud who shy away from this line. This is what happened in the 1992 election when Labor Party led by Yitzhak Rabin won when it ate away at the Likud electorate.