Likud seniors cowed by Netanyahu, but for how long?

Senior members of Likud are considering various scenarios for the day after the Sept. 17 election while their party leader, Prime Minister Benjamin Netanyahu, continues to try to ensure that he will be the only member the party considers putting forth to form a government. 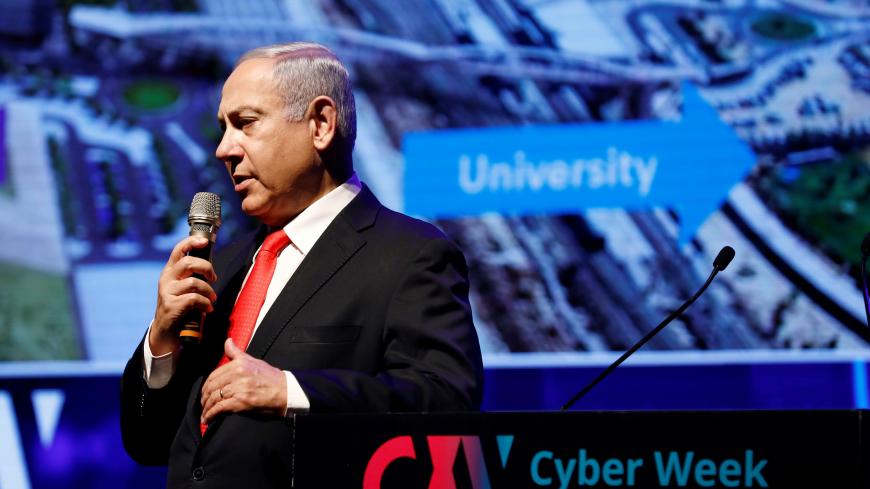 In an Aug. 7 article, Prime Minister Benjamin Netanyahu committed himself to only forming a right-wing government after the Sept. 17 elections, declaring that he would not consider a national unity government. “This is my commitment to Likud voters,” he wrote in Israel Today, the pro-Netanyahu freebie. The column represents Netanyahu's attempt to derail the unity government train headed his way, driven at full speed by Yisrael Beitenu leader Avigdor Liberman.

Despite various plans and machinations by Netanyahu, Liberman’s engine is not running out of steam. In fact, the opposite is happening: The train being pulled by the engine is gaining speed, forming an existential threat to Netanyahu’s government. There is, however, one caveat: This scenario is based on the assumption that Liberman and Netanyahu are not secretly in cahoots to make a mockery of Israel’s entire political system.

With the promise not to create a unity government, Netanyahu is attempting to dismantle the process shaping up to bring an end to his time at the helm once and for all. One simple fact casts a shadow over his efforts: He failed at the task of forming a government with the current Knesset, in which the right-wing bloc won 60 seats (excluding Liberman's party). Those results were not enough for Netanyahu to form a majority government of at least 61 members of the Knesset.

The polls currently predict that in the next Knesset, the right-wing bloc will number only 54 or 55 mandates. What will Netanyahu do if he does not have enough votes to assemble a right-wing government? He will most certainly try to cobble together a unity government, and so long as he heads it, there's no problem as far as he’s concerned. If someone else gets the reins, however, the Netanyahu era will soon come to a close.

Liberman succeeded in undermining Netanyahu’s peace of mind on Aug. 3 in an interview on Channel 12. Given that Blue and White has committed to not joining a Netanyahu-led government so long as Netanyahu continues to face indictment for corruption, Liberman let it be known that if Netanyahu fails to form a unity government, “I'll approach Likud lawmakers and tell them to bring someone that will agree to such a government.” Liberman even tossed out the name of Yuli Edelstein, the popular Knesset speaker, as a possible alternative candidate for the premiership.

With this ostensibly off-the-cuff remark, Liberman touched on the nightmare that has haunted Netanyahu since his failure to cobble together a government after the April election. In this scenario, senior Likud members would be confronted with a powerful temptation: They would be close enough to smell and touch leading the country, with only one thing separating them from it — Netanyahu.

The day after Liberman’s statement, staunch Netanyahu loyalist and Likud Knesset member David Bitan was sent to the first 40 people on the Likud's list of Knesset candidates to have them sign a declaration guaranteeing North Korean-like loyalty to the prime minister. The declaration states that the party will not put forward any candidate for the premiership other than Netanyahu. All 40 signed the declaration within minutes. At this stage, they are afraid of riling their leader, but what will happen next?

Netanyahu knows of course that these pathetic written commitments have no binding legal, public or political value. If it turns out that the Likud leader is what separates the party from remaining in power or forming the opposition, all bets are off. Under such circumstances, it would be difficult for Netanyahu to find an insurance agency that would agree to underwrite his political life expectancy.

“We are talking about it, thinking about it, planning and discussing it all the time,” a senior Likud member told Al-Monitor under condition of anonymity. “It is natural. It is obvious. It cannot be avoided.”

He was referring to the various scenarios that could emerge, should Netanyahu be unable to cobble together a government come Sept. 18. Under such circumstances, two options are possible: the first is that President Reuven Rivlin could offer the task of forming a government to Blue and White leader Benny Gantz; the second is that Rivlin could call for the establishment of a national unity government headed by a Likud candidate who is not Netanyahu.

What would the Likud elites do under such circumstances? Would Netanyahu’s North Korean-like discipline and political terror hold up under a test of this sort? Who would be the first to dare raise his hand against the leader?

Likud seniors are for the time being petrified into silence by the terror they perceive on the part of the Netanyahu family. They look like deer caught in the headlights. On the other hand, the forces of nature are hard to hold back. Thus, even though Likud higher-ups distrust one another, they have recently begun speaking to one another about ways to resolve the anticipated Gordian knot. Most of the roads to Rome also lead to the end of the Netanyahu era.

Several “potential heirs” can be identified in the political system. The first is, of course, former Minister Gideon Saar, who was long ago crowned “head of the conspirators” by the Netanyahu family. Other alleged “plotters” include Ministers Yisrael Katz and Gilad Erdan, Knesset Speaker Yuli Edelstein and former Jerusalem Mayor and Knesset member Nir Barkat. Some of them keep a finger perpetually in the political wind and conduct frequent, in-depth surveys and even secretly discuss their findings, when flattering, to their associates.

If and when the time comes, Netanyahu will summon all of his political powers and cunning, his international status and public popularity and bring them to bear against the suspected plotters lurking in Likud. This will drive Israel into an unprecedented political dead end: on the one hand, neither of the two sides will be able to create a government, while on the other hand, a unity government will be impossible due to Netanyahu’s indictment, subject to a hearing.

At that point, Netanyahu and Gantz will try to widen the cracks in the opposing camp. In fact, they have already begun the process. Netanyahu will try to “peel off” Blue and White’s right-wing flank and form a coalition led by him, and Gantz will try a similar maneuver against the Likud. In this tug-of-war, Netanyahu has much more experience than Gantz and far fewer inhibitions and internal checks and balances. All this could be unfolding at the beginning of October alongside Netanyahu’s hearing on the three criminal files awaiting him.

Thus, Israel faces a veritable storm that's currently looking like a Category 7 hurricane. It is hard to imagine even Netanyahu emerging unscathed from this one.