Days before his deadline for composing a majority coalition, Prime Minister Benjamin Netanyahu fears abandonment by ultra-Orthodox allies or a rebellion within the Likud. 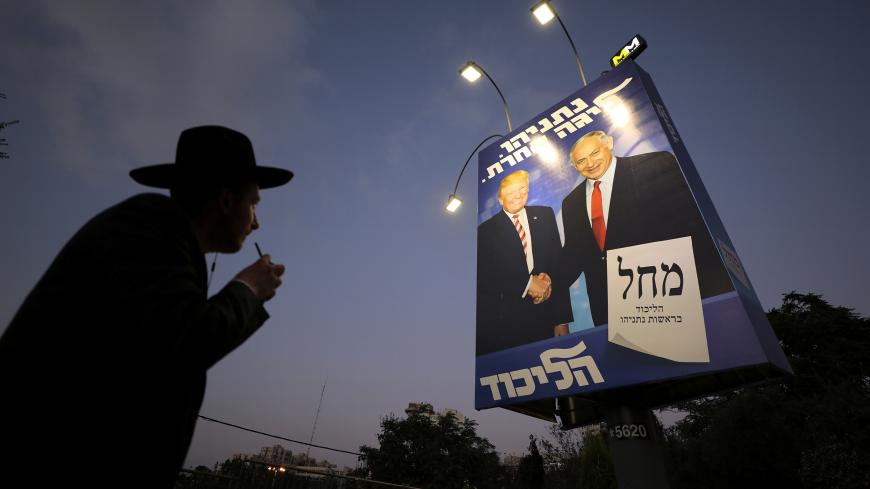 This is the second time in recent weeks that Prime Minister Benjamin Netanyahu has canceled a diplomatic meeting at the last minute — an important, prestigious and long meeting abroad. After the sorry results of the Israeli elections in September, he canceled his regular participation in the opening discussions of the UN General Assembly, and on Oct. 15 he canceled his Oct. 19 trip to Japan. There Netanyahu was supposed to attend the Oct. 22 enthronement ceremony of the new emperor and meet Japanese Prime Minister Shinzo Abe.

Anyone who knows the Netanyahu family knows that it does not pass up such trips easily. Over the last decade, Netanyahu insisted on attending almost all UN General Assembly meetings with all the associated honors involved. But Japan was the real thing, the jewel in the crown. Alas, the enthronement of the new emperor in Japan will take place without the old emperor from Jerusalem.

On Oct. 23, Netanyahu is supposed to return his mandate (for assembling the next government) to President Reuven Rivlin. The prime minister has no intentions of asking for an extension of 14 days, for one simple reason: He knows that Rivlin will never give it to him. The odds are that Rivlin will hand over the mandate for assembling a government to Blue and White leader Benny Gantz, something that had seemed inconceivable in Israel until recently. If Netanyahu had chosen to attend the event in Japan he could have found “caught” abroad while his 28-day mandate to form a government ran out. Thus, when faced with the choice between asking for political asylum in Japan or continuing his frantic efforts to hold on to his stronghold in Jerusalem — Netanyahu chose the latter.

The dilemma now faced by Israel’s perpetual prime minister is a cruel one. Under the outline of conditions presented by Yisrael Beitenu leader Avigdor Liberman right after Yom Kippur (Oct. 9), Netanyahu would have to dismantle the right wing/ultra-Orthodox bloc of 55 seats he has entrenched himself in ever since the elections. If he agrees, he’ll receive Liberman’s support in the proposal made by Rivlin: This includes a rotation in which Netanyahu would be first to receive the premiership, but then would have to go into “incapacity mode" should an indictment be served against him. This is like a large delicious candy with a small poisonous pill inside. Netanyahu knows that the moment his right-wing partners get a whiff of an upcoming betrayal, they will be the first to jump ship and land in the opposing camp ASAP. Things got even worse Oct. 15 when Shas’ spiritual leader Rabbi Shalom Cohen (head of the party's rabbinic council) called on Blue and White senior leader Yair Lapid and on Liberman to join a government with the ultra-Orthodox. Cohen said that if they agree to the scheme, they “will be awarded with a heavenly voice that will declare … ‘You are invited to the world to come.'”

Cohen’s words turned Netanyahu’s fears into real panic. The prime minister has been counting on the rift between Lapid and the three other partners in Blue and White (Benny Gantz, Mosshe Ya’alon and Gabi Ashkenazi) with everything connected to the possibility of bringing the ultra-Orthodox into the coalition. Lapid has been pushing against an alliance with the ultra-Orthodox from Day One. Therefore, Netanyahu views all their efforts at finding common ground on this issue with great worry.

Netanyahu finds himself juggling an unbelievable number of balls in the air simultaneously. He has one eye on those he views as candidates for betrayal from within the Likud, such as Public Security Minister Gilad Erdan, former Minister Gideon Saar, senior Likud member Avi Dichter and a few more. He has to keep his second eye on the “bloc,” and a third eye is trying to pry Naftali Bennett and his Yamina party people into the Likud with the goal of enlarging Netanyahu’s party and thus sidestepping Gantz (at least technically). Netanyahu even has a fourth eye on ideas for creating rifts in Blue and White. Simultaneously with all this, the premier continues making tremendous efforts to create some type of diplomatic-security breakthrough that would restore his now-weakened status as the one and only “Mr. Security,” and restore his status as the darling of people such as US President Donald Trump and Russian President Vladimir Putin.

This magnificent house of cards is now crashing around Netanyahu’s head at a worrisome pace. Putin ignores Netanyahu in the Naama Issachar affair (a young Israeli woman has been sentenced to 7½ years in prison over smuggling cannabis into the Moscow airport) while Trump has disconnected himself from the Middle East, leaving Israel alone vis-a-vis the threatening Iranian axis (see two earlier articles on this issue). In order to halt the avalanche, the prime minister will have to use all his political talents, together with an unreasonable quantity of miracles.

As of now, no one hangs superfluous hopes on Gantz’s ability to assemble a government, if and when the president imposes the mandate on the Blue and White leader next week. True, Gantz is edging closer to the ultra-Orthodox but can’t get too close lest he lose Liberman. Knesset member Ofer Shelach is close to the Arab legislators, but also can’t get too close for the same reason.

Thus, the real drama would take place after Gantz returns the mandate to the president, sometime in the second half of November, assuming he as well fails to compose a majority coalition. Then Israel would have 21 days to save itself. If both Netanyahu and Gantz fail to form a government, the mandate would be given to the Knesset, and all hell would break loose. The much talked-about possibility of an inside-Likud revolt against Netanyahu might happen then and there (though the odds for this are not high). Or 61 Knesset members might unite around a certain Knesset member (who doesn’t have to be the head of a party) and appoint him or her to assemble a government. Those would be days during which Liberman could carry out some kind of tie-breaking political process, such as asking the Likud to call on another legislator (such as senior Likud members Saar or Yuli Edelstein) to assemble a government with the support of Yisrael Beitenu.

These would also be the days during which Netanyahu’s political fate would be sealed. Meanwhile, the criminal indictment clock is nearing its end in the office of the country’s attorney general.

by Murielle KASPRZAK and Joseph SCHMID | AFP | May 26, 2022
END_OF_DOCUMENT_TOKEN_TO_BE_REPLACED