As members of the 22nd Knesset took their seats, speculation swirled about a third round of elections within a year and the twilight of the prime minister's political career. 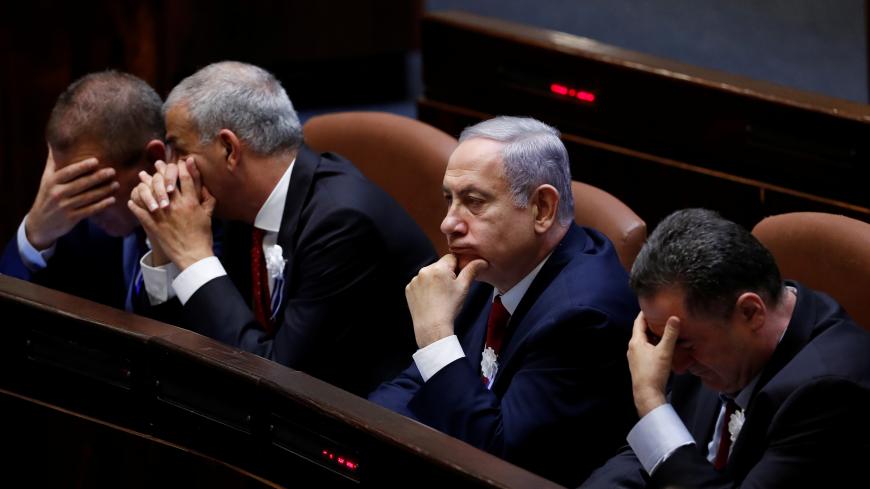 The Israeli prime minister entering the Knesset on the day members are sworn in has traditionally been a festive occasion. On the afternoon of Oct. 3, the current officeholder arrived and entered almost without notice. Prime Minister Benjamin Netanyahu entered through a side door, and once inside, he immediately disappeared into the room reserved for his Likud faction. An air of uncertainty surrounded him.

Just a few hours earlier, Netanyahu had met behind closed doors with Avigdor Liberman, chairman of Yisrael Beitenu, after a long period during which the two men did not communicate. Netanyahu had initiated the meeting, and in the end, all he got from it was reassurance that Liberman would not be the one to save him. Liberman will only join a secular unity government. Refusing to toss a lifeline, Liberman continues in his role as Netanyahu's political executioner. Further evidence of the meeting’s failure could be seen in Netanyahu’s almost desperate attempts to catch Liberman’s eye in the audience during his speech to the Knesset, especially when he spoke about the sensitive security situation, which he said demands unity. Liberman made a show of avoiding direct eye contact.

Netanyahu had no good news for his party. President Reuven Rivlin had granted him a mandate on Sept. 25 to form the next government, but one week on, Netanyahu was exactly where he had started, with a bloc of 55 Knesset members from the Likud, the ultra-Orthodox parties and Yamina, and nothing more on the horizon or any cause for hope. If anything, his situation had worsened. The Blue and White still refuses to sit in a government with him because of the criminal charges he faces. With the hearing on those charges having begun Oct. 2, Blue and White shows no signs of changing course.

Meanwhile, as if to show the seriousness of Blue and White's position, Knesset member Yair Lapid, the party's number two, announced that he would forgo his rotation agreement with party chairman Benny Gantz to serve as prime minister in a future government if doing so would advance the prospects of a unity government. Lapid did so after Netanyahu had spent several days accusing him of blocking a unity government because it would mean that Lapid would be denied a rotation as prime minister. While Lapid’s remarks had no practical significance — even if a unity government based on a rotating premiership were formed, it would be Gantz and the Likud candidate, not Lapid, trading places at the helm — it proved that despite differences of opinion and even tensions among Blue and White leaders, they were committed to fighting back against Netanyahu’s political maneuvering.

As far as Netanyahu was concerned, the bad news kept coming throughout the day. At one point, he insinuated that he was planning a snap primary to determine who should lead the Likud, hoping to show Blue and White that there is no chance of an uprising against him in his party. The move elicited an unexpected response from former Minister Gideon Saar, who tweeted, “I’m ready.” It seems as if Netanyahu never imagined that Saar would dare challenge him when the rest of the Likud was closing ranks around him.

Netanyahu had sought to demonstrate that he was the party’s unchallenged leader and was stunned to get the opposite result. What he actually showed was insecurity and weakness that ended up opening an unnecessary front for him within the Likud. Over the course of the day, Netanyahu came to recognize the gravity of his mistake and withdrew his idea for a primary. Still, the genie was out of the bottle. It is no longer possible to stop further discussion of a Likud vote. As if that were not enough for one day, Netanyahu received updates from his lawyers, who were spending their second day at a hearing in the Justice Ministry before Attorney General Avichai Mandelblit, who will decide whether to indict him and if so on what charges.

Netanyahu’s shaky political and legal situation and the impossibility of forming a government without him (for now at least) hover over the 22nd Knesset, sworn in under a heavy cloud of uncertainty over its future. Two and a half weeks after the Sept. 17 election, which concluded without a clear winner, the most likely scenario is a third round of elections in less than a year. What this means is that Israeli legislators, who put on their finest clothes and brought their families to the swearing-in ceremony, will not be able to fulfill their mission. Without a new government, the Knesset is paralyzed. Most of its committees are unable to function. No legislation can be produced.

The tragedy of the 22nd Knesset on the day of its swearing in could be seen in every bit of ceremony and heard in every speech. The red carpet was brought out for the occasion, as it has always been a joyous event, full of hope for new beginnings. This time, however, it seemed like the preface to the next round of elections. Everyone spoke about unity and reconciliation, but the stipulations and political boycotts remained in place: Blue and White will not sit in a government with Netanyahu while he faces criminal charges, and Yisrael Beitenu refuses to sit in a government with the ultra-Orthodox or with parties on the far right or left.

On top of all this, Joint List Knesset members boycotted the swearing-in ceremony to protest the failures of the Israel Police in addressing crime and violence in the Arab sector. Instead, they joined a demonstration in Majd al-Krum, where an Israeli Arab was recently murdered. When Arab Knesset members recommended Benny Gantz to form the next government, it looked like they were inaugurating a new era. It was a historic step that appeared to bring an end to a long period of separatism and isolation, but then it seemed like it never happened.

All signs suggest that Israel's political system is entering a transitional period marked by instability. It is hard to tell how long it will last or how intense it will be. Netanyahu was Israel’s unchallenged leader for an entire decade. In fact, he was the only player. He set the rules of the game, and not just for the Likud. Now it appears his tenure is into its twilight, and there's no turning back. Even if Netanyahu survives, he will be weakened and vulnerable. He will even have to fight for his position in a party primary, likely within a year.

The Netanyahu era, despite all its flaws, was a time of political and government stability. One of the things it failed to do was create natural leadership alternatives. It was only in the last few months that alternatives began to take shape. Gantz's Blue and White is the leading option, but it suffers from fissures that could break it apart at any moment. Gantz seems to be in a better situation than Netanyahu, but the truth is, he can’t form a government either.

“Israel’s security and Israeli democracy are facing a period of emergency,” Rivlin warned at the Knesset ceremony. Using a soccer metaphor, he further remarked, “The results of the election are a red card that the citizens of Israel gave to their elected officials.” With this, Rivlin tried to breathe new life into his effort to encourage Gantz and Netanyahu to form a unity government, an initiative that had initially crashed upon contact with reality. It appears there are no takers.