What's next for Netanyahu?

Although Benjamin Netanyahu failed to form a governing coalition, it doesn't mean he's out of the game just yet. 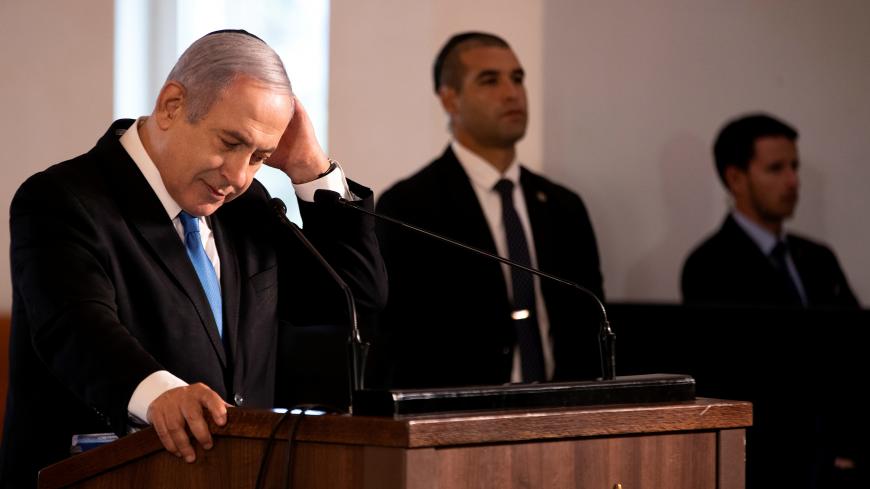 That was the evening of Oct. 21, just a few minutes after Israeli Prime Minister Benjamin Netanyahu announced that he was returning his mandate to form a new government to President Reuven Rivlin. Lapid’s tweet reflected a very real situation. Netanyahu had just failed to form a government for the second consecutive time. It was a serious blow to his image as well. For the first time in a decade, the mandate would be held by someone other than Netanyahu. In other words, the power to form a government had just slipped from his hands.

Yet, his rival Benny Gantz’s accomplishments at the helm of Blue and White remain only symbolic, at least for now. Gantz might receive the government mandate, but within the allotted 28 days he has no real chance of forming a “broad, liberal, Zionist government,” as he envisioned, not if it means with the Likud but without Netanyahu. There will certainly be negotiations between the competing sides, but it is unlikely that the situation will change.

Another option on Blue and White's desk is an outline for a minority government with the support of the Arab Joint List from outside the coalition and the abstention of Yisrael Beitenu. In fact, this seems to be the only option Gantz has for assembling a government with himself at its head. Will it happen? Not likely.

There are too many conditions to meet, chief among them a concession by Yisrael Beitenu Chairman Avigdor Liberman on one of his major campaign promises: He swore then and continues to hold that he will only sit in a unity government consisting of Yisrael Beitenu, the Likud and Blue and White. He categorically rejects the participation of the Joint List and the ultra-Orthodox. Furthermore, there are right-wing members of Blue and White, among them Zvi Hauser and Yoaz Hendel, who would have a hard time voting for such a minority government.

Meanwhile, Netanyahu has been signaling that he isn’t going anywhere. During Sukkoth, he spoke on the phone with all sorts of people, both politicians and friends, who called to congratulate him on his 70th birthday, which he celebrated during the holiday, on Oct. 21. One of the callers told Al-Monitor that Netanyahu had sounded pragmatic. According to the source, Netanyahu is concerned about the pending decision on his hearing involving corruption charges, but he has no plans to relinquish leadership of the Likud.

“He told me that if there is a minority government, he would be appointed head of the opposition,” said the source, who spoke on the condition of anonymity. “It didn’t sound like spin either. He believes that a minority government will fall quickly. From what I understood, he has support for that at home too.” That evening, Netanyahu himself said as much publicly.

While Netanyahu’s situation is bad by its very definition, giving up the mandate so Gantz can try to form a government doesn’t make it any worse. Blue and White was hoping, and still hopes, for one of two things to happen: the Likud replaces Netanyahu or the bloc of 55 right-wing, Likud and ultra-Orthodox Knesset seats falls apart. So far, neither has materialized. In fact, since the Sept. 17 election, Netanyahu has actually solidified his status in the Likud, with the party’s Central Committee deciding on Oct. 10 that he will continue to serve as head of the party as long as the 22nd Knesset remains in session. This means that until a date for new elections is set, Netanyahu will hold the Likud chair, so the Blue and White must negotiate with him.

While some in Blue and White claim that when push comes to shove, at least some members of the Likud will come to their senses, this is nothing more than wishful thinking, at least in the short term. It is not based on any covert information or machinations underway with even the slightest chance of success. The reason for this is not because the Likud would never depose a serving prime minister, but something much more rational than that: Netanyahu is a “seat machine,” even with his problematic legal situation. He can garner the party more seats than any other candidate.

Poll results released Oct. 22 by Channel 13 give the Likud under Netanyahu 33 seats, which is 1 seat more than it won in the last election. The poll also found that Blue and White under Gantz would win another seat, so it would still be the larger party, this time with 34 seats. The two blocs would maintain their parity (56-56) after new elections. In other words, no candidate could form a narrow government.

Those 33 seats are Netanyahu’s insurance policy within his party. He can use them to prove to Likud members that the public has not abandoned him, despite his recent political failures, the criminal cases pending against him, claims by his rivals that he is singlehandedly preventing the political system from making progress and assertions that without him a new government could be formed in an hour.

Furthermore, Netanyahu has managed to keep his bloc of 55 seats close. In a series of telephone consultations on Oct. 22 with the director general of the president’s house, all 55 members of the bloc remained firm in their commitment to recommending Netanyahu to be prime minister. Senior Yamina member Naftali Bennett went out of his way in expressing his support.

In an Oct. 19 Facebook post, Bennett argued that Netanyahu was being “persecuted,” and added, “If the legal system succeeds in taking Netanyahu down because of some cigars and a few articles on the Walla website, it would be a terrible blow to the entire right-wing camp.” It looks like Bennett is headed to the Likud. His relationship with Netanyahu has improved considerably in recent weeks and with good reason. Netanyahu is a real artist when it comes to courting people, or as one Likud minister put it, speaking confidentially, “He is the suitor of your dreams and a husband from hell.”

Given the current situation, Netanyahu has prepared himself for three possible scenarios: he becomes head of the opposition in the event of a minority government, which would make him a symbol of government and allow him to manage his legal proceedings from a position of power; he enters a unity government with Gantz and serves first in the prime ministerial rotation; another round of elections is called.

A senior member of Blue and White speaking to Al-Monitor on the condition of anonymity said that if Attorney General Avichai Mandelblit announces Netanyahu's indictment within the next few weeks, the situation will change to Netanyahu’s detriment, and the Likud will ditch him.

What, however, would happen if Netanyahu managed to remain as head of the Likud even under these circumstances? In an interview with Channel 12 on Oct. 22, Knesset member David Bitan (Likud) offered his assessment that there will not be another round of elections. As he sees it, at the moment of truth, both sides will realize that they have no choice and will form a unity government. He added that once that happens, the blocs will fracture, but he refused to go into further detail. The Prime Minister’s Office, not liking what it heard from Bitan, is forbidding Likud Knesset members and ministers from speaking to the media until further notice.

What all this suggests is that anything is possible. As the chances of a third round of elections increase, so does the likelihood of a unity government.