For Prime Minister Benjamin Netanyahu, all roads must lead to a fifth term, even if it means forming a national unity government with Blue and White. 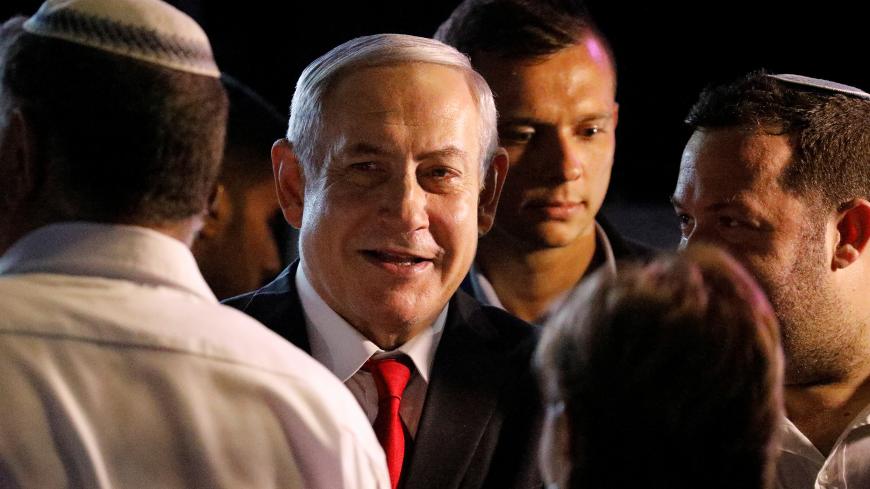 Black clouds continue to gather above Prime Minister Benjamin Netanyahu. Unlike the lead-up to the April 9 election, when the prime minister pulled out all the stops and managed to unite the ultra-radical Jewish Power (Otzma Yehudit) with the United Right to ensure their entry into the Knesset, similar efforts ahead of the Sept. 17 elections have failed.

Vehement objection by right-wing stalwart Naftali Bennett prevented Jewish Power's Itamar Ben-Gvir and Baruch Marzel, extremist followers of Rabbi Meir Kahane, from joining the United Right alliance at the last minute before the Aug. 1 deadline for submitting candidate lists. That means Jewish Power will run separately, as will the right-wing libertarian Zehut, led by Moshe Feiglin. In other words, at least three parties are running to Netanyahu’s right, and two of the three are highly unlikely to surpass the electoral threshold by garnering the requisite 3.25% of ballots cast to enter the Knesset. This failure of Netanyahu's survival plan, based on obtaining the maximal number of votes for the right-wing camp, spells trouble.

Nonetheless, one must not forget that the same thing happened in the previous elections: Bennett and his political sidekick, Ayelet Shaked, ran independently of the right-wing alliance as members of the New Right and tripped on the electoral threshold, failing to get into the Knesset. Their votes when combined with those of Feiglin, who also did not attract the required number of votes, represented close to 250,000 votes for the right going straight down the drain.

The real difference, however, between the April vote and the September election is simple, yet dramatic: This time, Netanyahu will not be able to dissolve the Knesset as he did last time when the results did not allow him to form a government. Unless he wakes up on Sept. 18 with at least 61 of the 120 Knesset seats, with or without the support of Avigdor Liberman’s Yisrael Beitenu, he is finished. The decade-long Netanyahu era will have concluded.

Netanyahu, by the way, is optimistic. He believes his prospects are good if his Likud achieves the same results as last time, winning 35 seats, and the ultra-Orthodox parties maintain their record 16 mandates and the newly configured United Right garners 10 seats.

Netanyahu’s “political bailout plan” is based foremost on efforts to ensure at least enough votes to give his political base a slim, 61-seat Knesset majority. That, however, would still not guarantee his grip on power. Some of the 61 may not be willing to vote in favor of granting the prime minister blanket immunity from prosecution (in his case, on charges of corruption) and in the process crush the Supreme Court and the law enforcement system. For the moment, Netanyahu’s sole focus is on ensuring a hairbreadth majority. He will take care of the rest when the time comes (if it comes).

What if he is unsuccessful? Netanyahu will use all his political wiliness and Machiavellian wits and form a “blocking bloc.” In short, if he can't garner sufficient support to form a government, he will prevent his rivals from doing so. Netanyahu is counting on Liberman, who has mounted a determined anti-clerical campaign, to refuse to join a government led by Netanyahu's rival Benny Gantz, who will need the ultra-Orthodox in his coalition to ensure a Knesset majority. The current prime minister knows that there is not an Israeli alive who can square a circle to include the left-wing Meretz (also essential for a Gantz-led government) and the hawkish Liberman. In that sense, the odds in Netanyahu’s favor are not bad.

Netanyahu’s next option is based on unions and desertions. If Likud gets the most votes, and President Reuven Rivlin deems that he stands the best chance of cobbling together a coalition and appoints him to form the next government, a likely scenario, Netanyahu will turn for support to potential deserters from the other side of the political map. He will entice them with offers they can't refuse.

Take former Knesset member Orly Levy-Abekassis, who has teamed up with Labor in this campaign. In return for coming over to Netanyahu's side, Netanyahu will offer her the Finance Ministry and make all her social policy dreams come true. Labor leader Amir Peretz will get a similar offer if he can convince his people to defect. As for former Prime Minister Ehud Barak, who has spewed endless vitriol at Netanyahu in recent months and formed the Democratic Camp opposition faction in alliance with Meretz, can he be lured to return to the scene of the crime, that is, to his previous post as Netanyahu’s defense minister? Probably not, though with the caveat that anything is possible in Israeli politics.

The final option in Netanyahu’s survival scenarios is a unity government between Likud and Gantz’s Blue and White. Polls indicate that most Israelis favor this combination. Liberman, currently polling at more than 10 Knesset seats, has been riding this hobbyhorse toward the dawn of his political comeback. Rivlin is also expected to endorse and encourage this solution if the last election's tie between the two major camps remains unbroken.

Netanyahu will gratefully embrace such an option, but only if he is at the helm. He has no other option. He will also offer to split the prime minister’s term with Gantz, but only if Netanyahu goes first in the rotation agreement. In any case, he would have to overcome Blue and White’s pledge not to join a Netanyahu government as long as he is under suspicion of corruption. In the evening hours of Aug. 1, Gantz hinted that such a scenario might be feasible. In response to reporters’ questions, he said his party would do everything it can for the sake of the country and did not rule out unity with Netanyahu. After several minutes had elapsed, a harried-looking Gantz returned to the microphones to retract his comment, claiming he had misheard the question put to him.

The challenge now ahead for Gantz, a former army chief of staff, is to keep the disparate elements of Blue and White together if and when Netanyahu offers him a government partnership. The offer could result in a Blue and White split that would provide Netanyahu with the oxygen he needs for political survival. Gantz will try to play the same trick on Netanyahu, by encouraging senior Likud members to rebel against him and join a unity government led by Blue and White. In this gambit, Netanyahu’s advantage over Gantz and his fellow Blue and White leaders — former army chiefs Moshe Ya’alon and Gabi Ashkenazi and the politician Yair Lapid — stems from one simple principle: They are fighting for an office. He is fighting for his life.