What Israel’s coalition will look like after September elections

The Sept. 17 elections offer a very unclear picture so far, with a multitude of possible scenarios for the composition of the next government and no clear win for either camp. 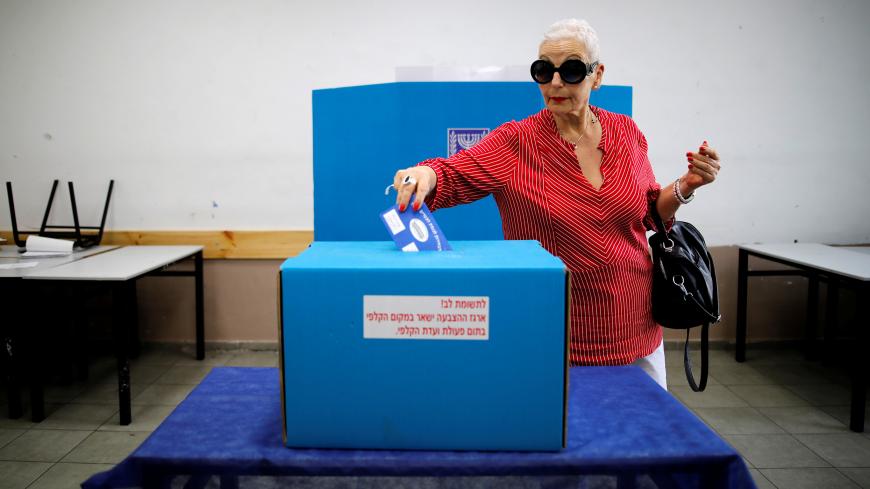 A woman casts her ballot as Israelis vote in a parliamentary election, at a polling station, Tel Aviv, Israel, April 9, 2019. - REUTERS/Corinna Kern

Israelis go to the polls in just over two months, on Sept. 17, for the second time in less than six months, and the dead end looks deader than ever. According to the polls, Prime Minister Benjamin Netanyahu will not have the parliamentary majority required to form a new right-wing government without the support of his nemesis Yisrael Beitenu head Avigdor Liberman, whose electoral strength keeps growing. The rival Blue and White party led by Benny Gantz and Yair Lapid will not have the majority needed to form a center-left government, either.

The recent decision by former Prime Minister Ehud Barak to join the race has not changed the situation in any substantive way and the left-wing parties — Barak’s Democratic Israel party, Labor and Meretz — are having a hard time deciding to join forces. The situation on the right side of the political map is no better. The parties led by Rabbi Rafi Peretz (HaBayit HaYehudi) and Bezalel Smotrich (National Union) have already announced a joint run as they did in April, but the other players — Naftali Bennett, Ayelet Shaked, Moshe Feiglin and the ultra-radical Jewish Power headed by Itamar Ben Gvir and Baruch Marzel — are running circles around themselves, unable to reach a decision on uniting. No one knows what Sept. 18, the day after the elections for the 22nd Knesset, will bring.

Netanyahu is making a supreme effort to ensure his political survival. He will try to score once again during “injury time” (the campaign period between the April and the September votes), possibly by a joint statement with President Donald Trump on a US-Israel defense treaty, and perhaps even get Trump over to Israel for another visit. Meanwhile, his Likud party has dropped in the polls, as has Blue and White, losing support to smaller parties on both sides. The question is what happens if the election results cannot break the current tie. Will Netanyahu manage to keep holding his Likud ministers and Knesset members hostage? Can a formula be found to enable the formation of a unity government comprised of Netanyahu, Gantz, Lapid and their party colleagues Gabi Ashkenazi and Moshe Ya’alon? Polls indicate this combination is a favorite with voters, who are fed up with political divisions and infighting. But is this a realistic option?

The keys, in this case, would be in the hands of President Reuven Rivlin, who is ideologically aligned with the political right but also a bitter Netanyahu foe. By law, Rivlin should hand the task of forming the country’s next government to the elected Knesset member with the best chances of success. If Netanyahu is still deemed to have the best prospects, meaning that more heads of Knesset factions recommend him for the job than do Gantz, Rivlin will probably “hold his nose” and hand him the keys. Less certain is whether he will also give him the two weeks extension stipulated by law if he fails to cobble together a coalition within the initial 28 days. Last time, in May, Rivlin gave him the additional two weeks, but Netanyahu failed. There is no certainty of a repeat extension this time around. Rivlin’s associates predict he will not waste more time once the deadline is reached. What will he do?

One option is for Rivlin to call on the heads of the two largest parties to form a unity government. However, such an option has a built-in flaw since the leaders of Blue and White have announced with great fanfare that they would not join any government with Netanyahu in light of the corruption indictments hanging over his head. They will then face a cruel dilemma. They will have to decide on allowing Netanyahu to survive politically, in return for a share of power, equal representation and control of all the portfolios related to the justice system in order to remove looming threats from the right-wing parties to its independence. On the other hand, they know that such a choice will turn them into the party that enabled Netanyahu to continue ruling. In party discussions in recent weeks, the option had both detractors and proponents, meaning that it could come up again after the elections.

If such a situation arises, Blue and White would make a counter-offer of a unity government in which Netanyahu and Gantz would split the prime minister’s term equally, with Gantz taking the first half to allow Netanyahu time to mount his legal defense if he is indicted. There is no way Netanyahu will accept such an offer. He has been fighting to keep his seat so that he can contest any indictments that come his way from the prime minister’s office; he will not cede that top position for all the money in the world. Blue and White’s dilemma becomes even starker given prospects that if it can only stick to its guns a bit longer and refuse to sit with Netanyahu, it will hasten the end of the Netanyahu era. Netanyahu would become a lame duck and eventually his Likud party will rise up against him.

Chances of a lone Likud member doing so are nil. Anyone in the ruling party who raises their hand against its leader is cursed for life. In that case, one possible scenario is a dramatic news conference by a large number of leading Likud lawmakers — let’s say a group of 10 Knesset members — who announce that given the political impasse, the country’s needs and the fact that new elections cannot be called for a third time, there is no option left but to replace Netanyahu. They will thank him, extol him and ask him to vacate his seat and defend his good name in court. If he is cleared of all charges, he will retain his place in the Likud. Netanyahu, for his part, will immediately dub these rebellious lawmakers “the gang of 10,” claim that they are mounting a coup and try to foil the plot with everything he has. Such a drama, if we ever get there, would be one of the decisive moments in Israel’s political history. On July 20, Netanyahu will break the record set by David Ben-Gurion as Israel’s longest-serving prime minister. Two months later, he will face his fate.

Netanyahu’s standing as prime minister and Likud chief is strong as long as he “delivers the goods,” as the Likud members say. The question is whether this position will be undermined when it becomes clear that he is unable to form a government for the second time in a row. Will this shake up the tribal loyalty of the Likud ministers and members? Will Liberman keep refusing to sit with Netanyahu and come up with new excuses? Liberman has already announced during the current campaign that unlike last time, he does not rule out a government led by Gantz and will join any government that pushes through in its entirety the law mandating a military draft of ultra-Orthodox men. Liberman also does not intend to recommend to Rivlin that he task Netanyahu with forming the next government as he did last time, and will instead recommend the formation of a unity government without “radical and ultra-Orthodox” parties. For now, prospects of such a government appear fairly good. The remaining question is who would lead it.