Who gains if Trump publishes peace plan before Israeli election?

While Prime Minister Benjamin Netanyahu may be pushing for the Trump administration to publish its "deal of the century" ahead of the March elections, the candidate who might gain the most from such a situation is Blue and White leader Benny Gantz. 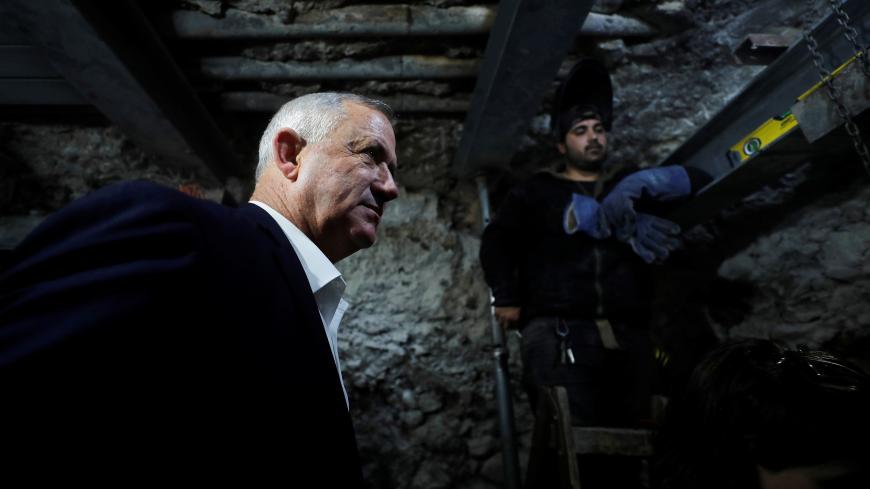 Benny Gantz, leader of the Blue and White party, walks inside a tunnel while touring "The City of David," a Jewish heritage site in the Palestinian neighborhood of Silwan, East Jerusalem, Jan. 14, 2020. - REUTERS/Ammar Awad

While many people had long concluded that President Donald Trump’s “deal of the century” had died, it came back to life Jan. 13 when voices were heard from Washington hinting at the possibility of its presentation on the eve of the March 2 election for the 23rd Knesset. The silence of Prime Minister Benjamin Netanyahu, in contrast to Blue and White leader Benny Gantz's complaint that such a presentation at that time would constitute meddling in Israel’s internal affairs, caused some to think this had been orchestrated between Netanyahu and Trump. Or perhaps there could be an American green light for the annexation of the Jordan Valley, perhaps a green light for the annexation of all the West Bank settlement lands — at any rate something that could show that only under Netanyahu could Israel get such delicacies from the American administration.

Since hints from the administration regarding an “impending presentation” of the plan have become almost a routine event, we can assume that this time, too, especially since there are only six weeks left until the election, the administration will postpone revealing its plan (assuming that indeed there is such a plan). But even if the American president decides to surprise us, it’s doubtful that it will be the magic pill that would give Netanyahu the majority he didn’t win in the first two rounds of elections in 2019.

Seemingly, the outline of the plan is clear: Trump will offer a plan where there is no Palestinian state, there is no division of East Jerusalem, there is no vacating of settlements, no absorption of a single Palestinian refugee and no return to 1967 borders. The presentation of the plan would be followed by other, most obvious steps: Palestinian President Mahmoud Abbas blows up, rejects it out of hand in disgust, while Netanyahu gravely examines it and says it’s a valid basis for real negotiations; Trump thanks him for his willingness to compromise, and in light of the Palestinian determination not to miss an opportunity to miss an opportunity, he allows Netanyahu to annex whatever he wants. The public would be impressed by Netanyahu’s magic and would stream to the polls in order to give him four more years, despite the indictment for bribery, fraud and breach of trust against him that has landed at the desk of Knesset Speaker Yuli Edelstein.

Still, it’s hard to assume that this is what the leader of the free world would do. It’s much more likely that if he does this unlikely thing and presents his plan at the very last minute of the election campaign, it would include some kind of territorial concession. In such a case, the extreme right-wing parties would condemn Trump and argue that he misguided Netanyahu, showed a false face as a friend of Israel and now wants Israel to divide the land. Such a conflict, which would show Netanyahu as an errant follower betrayed by his master, could strengthen the extreme right at the expense of the Likud, and further widen the gap between Blue and White, which leads the polls, and Netanyahu’s party. In this situation Netanyahu would find it hard to publicly agree to the “deal of the century,” and this could put him in a position that he wants to be in least of all: a conflict with Trump.

Gantz’s stance against the possibility of the presentation of the plan now is justified, but it is not clear that this stand is wise. Instead of simply rejecting it in its current timing, he could clarify that he doesn’t fear a peace plan, and certainly not an American plan. And if he concludes that it accords with the Israeli national interest, as he sees it, he could actually welcome it and view it as a valid platform for negotiations with the Palestinian leadership. On the other hand, if he believes that the plan contains traps for Israel, he could oppose it whether or not Netanyahu agrees with it or not. Theoretically, and perhaps not only theoretically, there could be a situation where Netanyahu would find himself disagreeing with the plan and Gantz praising it, so that Trump finds himself hailing Netanyahu’s rival, although he intended to impede him.

But this is not only a political game between Blue and White and the Likud as the American president has played it when he established the American Embassy in Jerusalem and insisted that the settlements are not illegal and not an obstacle to peace. Somewhere over in Ramallah there is also a Palestinian side Israel must make peace with; after all, Israel is not making peace with America. A plan that turns out to be only a tool given to Netanyahu in order to prove that Israel has no partner is very problematic, and so even if Gantz says he accepts it, with no connection to Netanyahu’s position, but Abbas says it’s a plan that can be a basis for nothing, the leader of Blue and White would find himself in a kind of trap. He will also feel a need to follow Netanyahu and say that the Palestinian side is no partner. But he can’t allow himself to do so, especially if he too feels that the plan has no real anchor for the Palestinians to hang on to.

Presenting an American diplomatic plan a few weeks before an election in Israel is something that shouldn’t be done, and the Trump administration should understand this and retreat from such an intention, if there is one. If the plan is presented after all, Gantz should say he is glad for the American initiative, but would be prepared to seriously discuss it only after he’s elected prime minister, and that one of the components in his consideration will be the need to create a common basis for talks with the Palestinian side. Since the chances of the presentation of a plan returning Netanyahu to the status of “King Bibi” are quite small, Gantz would do well not to wage an open battle against its revelation.