How US plan for Mideast could shape next Israeli government

US President Donald Trump plans to present his "deal of the century" after the Israeli elections but before a new government is formed, when it could affect the new coalition's formation. 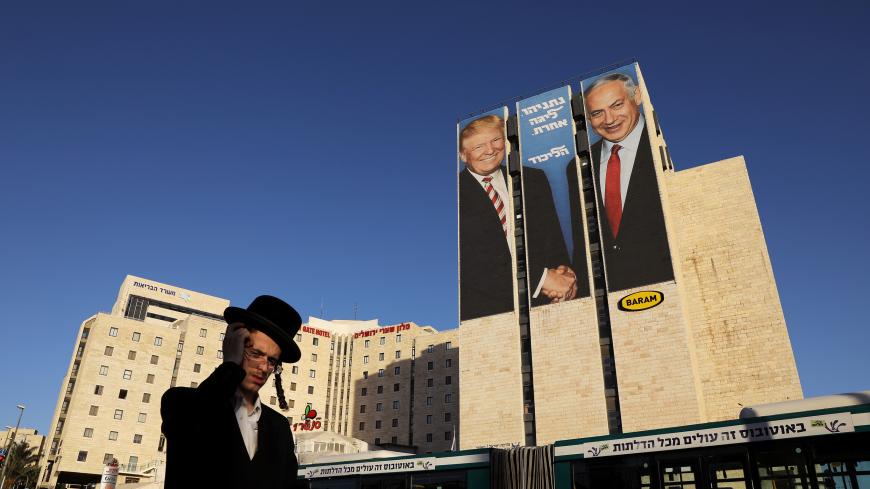 There is a new date for the "deal of the century" US President Donald Trump promised at the start of his term two years ago. White House senior adviser and Trump son-in-law Jared Kushner said at the Warsaw Mideast Conference that the United States will put forward a Middle East peace plan after the Israeli general election on April 9 and that both sides will have to make some compromises. Knowledgable sources confirmed to Al-Monitor that Trump plans to lay out his detailed plan for peace between Israel and the Palestinians after the Israeli election but before the formation of a new government, regardless of who heads it.

The choice seems a missed opportunity. The US administration could have laid out its plan during the electoral race, which does not seem to focus on any significant diplomatic issue. That way, it would have appeared on the public agenda and required the parties to adopt a stance in reaction to it. But that won’t happen. It is safe to assume that Prime Minister Benjamin Netanyahu signaled to Trump that by keeping the promise he made last year to submit his plan within four months, he could cost the Likud seats to other right-wing parties such as HaBayit HaYehudi. Netanyahu knows that the later would oppose any diplomatic plan even if it came from such avid settlement supporters as Ambassador David Friedman. At the same time, Israel Resilience head Benny Gantz probably has no qualms about the delay, either. His party is far from reaching any agreements with its partner, Moshe Ya’alon’s Telem, over the issue of partition of the land, without which there can be no peace plan.

In these circumstances, laying out the plan just before a new government is formed could turn out to be a blessing. On the backdrop of Israeli politicians' statements over the past few months, whoever forms the next government will have a hard time bringing in parties that are stubbornly opposed to the diplomatic solution on the table. It is similarly safe to assume that anyone tasked by President Reuven Rivlin with forming the next government will say that he considers the American plan a basis for negotiations despite his reservations, which will be raised during the negotiations if they take place. If it is Netanyahu, he can only hope that Palestinian President Mahmoud Abbas rejects the plan out of hand, as he has in the past. That way, Netanyahu can claim yet again that Israel has no partner for peace. On the other hand, if Gantz is tasked with forming a government, it can be assumed that he will not reject negotiations with the Palestinians even if he has reservations about certain components of the plan.

Should the outcome of the election make it possible for a bloc of center-left parties to prevent the right from forming an ideological coalition, the most likely scenario is the formation of a national unity government or a government with the ultra-Orthodox. In any event, the US peace plan could increase the chances of a unity government, regardless of who heads it. Netanyahu may be very popular with the current administration, but Trump himself is pushing for the implementation of the deal that he promised. At a press conference at last year's UN General Assembly summit, he called the plan his “dream.” He must also realize that Netanyahu’s next term in office may be too short to complete such a diplomatic maneuver, particularly since he is the kind of leader who would have a hard time leading such a project with the Palestinians. At the same press conference in 2018, Trump said that he wants to finish dealing with the peace plan by the end of his term in 2021. As such, it can be assumed that he would appreciate an Israeli prime minister who is willing to take his plan seriously.

In anticipation of the plan, Abbas set off this week for a round of talks with the leaders of the Arab Quartet (Egypt, Saudi Arabia, the United Arab Emirates and Jordan). He wanted to ensure that the pro-American Arab states, which provide vital support to the PLO, do not surprise him by adopting a plan that does not include all the components of the 2002 Arab Peace Initiative (two states based on the 1967 borders, with an exchange of territory agreed by both parties, East Jerusalem as the capital of Palestine and an agreement on resolving the issue of Palestinian refugees from 1948).

A senior Palestinian source told Al-Monitor on condition of anonymity that the emerging understanding between Abbas and the other Arab leaders is that the Arab League will promise to support the PLO’s positions in exchange for Palestinian willingness to begin talks about the plan, unless the Palestinians and the Quartet agree that the plan is a non-starter. If that is their understanding, the plan could still send Israel and the Palestinians back to the negotiating table. The pragmatic Arab camp is showing willingness to back the Palestinians, but would also likely reject the Palestinians’ total boycott of the American proposal. Meanwhile, the Russians, who play no small role in the region, may have reservations about the plan, but they are still not rejecting the initiative out of hand. Russian Foreign Minister Sergey Lavrov said Feb. 12 that the United States intends to force a solution on the Palestinians that they cannot accept. While he does not oppose the idea of an emerging American initiative, he is against any plan that does not include the establishment of a Palestinian state.

The administration’s proposal faces a particularly difficult road. There hasn’t been such a serious rift between the US administration and the Palestinian pragmatists since 1993. Abbas regards Trump as his enemy, or rather as someone who is making it difficult for him to run the affairs of the Palestinian Authority. Furthermore, he is unwilling to submit to American economic pressure. The current Netanyahu coalition includes dominant forces who are unwilling to even entertain the possibility of creating a Palestinian state, no matter its borders. If Netanyahu succeeds in forming the government he continuously speaks about (one made of parties on the right rather than a unity government), he will have a hard time avoiding sounding like he is rejecting Trump’s plan completely. If he does feel the need to reject it out of hand, the Palestinian response won't matter.

If a broad government is formed under Gantz, the plan could become one of its underlying principles. It is possible that the Trump team considered this possibility. It is, after all, reasonable to think that someone at the White House considered it when they came up with the idea of presenting the “deal of the century” sometime between the Israeli election and the formation of the next government.