The Israeli left has failed to challenge President Donald Trump’s "deal of the century" or to suggest alternative ideas on peace despite the plan's troubling provisions, including revoking the citizenship of Israeli Arabs. 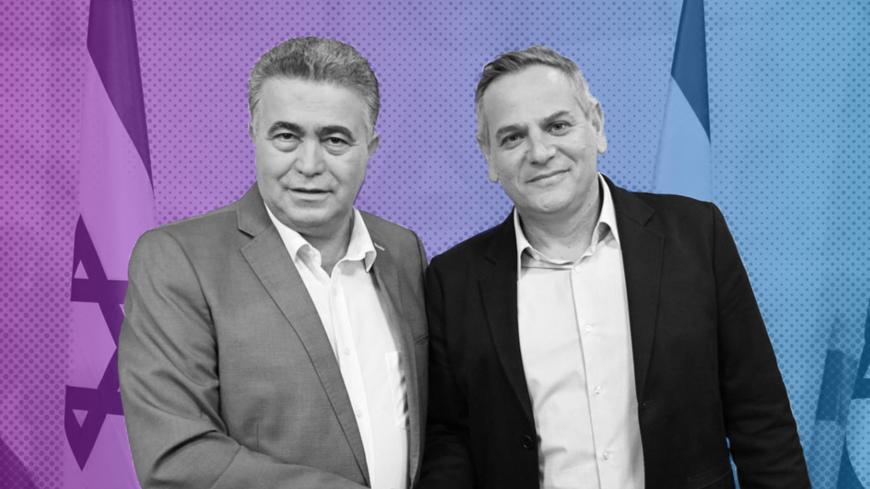 About a month before Israeli elections scheduled for March 2, President Donald Trump dropped a bombshell with his “deal of the century,” unveiling his diplomatic plan for peace on Jan. 28. The economic components had been presented at a “workshop” convened by the Trump administration in Bahrain last June.

Trump's plan has resurrected words in the Israeli discourse that had disappeared from the local political lexicon in recent years, among them “diplomatic negotiations,” “peace,” and “Palestinian state.” With the subject of peace once again on the table, however, instead of the Israeli left, for whom peace with the Palestinians is to a large extent its raison d’être, leave it to Prime Minister Benjamin Netanyahu to finds ways to derive usefulness from this turn of events.

In the days since the public presentation of Trump's plan, the left has made no effort to challenge it, to promote a real peace agenda, to offer new, alternative ideas or unfurl a peace-directed diplomatic vision while simultaneously rejecting the dangerous, hallucinatory ideas in the so-called deal of the century. Knesset members of the center-left have limited themselves to vague generalities that mean little to the Israeli voter despite many of them being given an open mike to speak their minds and promote a peace agenda. They did not call on the public to come out and reject the plan. Only a few hundred people participated in a Feb. 1 protest organized by the anti-occupation group Peace Now against the initiative. Meanwhile, only members of the Arab public participated in a demonstration in the town of Baka al-Gharbiya, revealing that there is little to the notion of a Jewish-Arab “partnership.”

The Trump program calls for a Palestinian state annexing the Israeli cities of the center-north Triangle region, where mostly Arab villages are located, along with the Arab Israelis living there. Blue and White — seeking to draw a clear line between itself and the left-wing parties committed to a resolution of the conflict on the basis of “two states for two peoples” — has embraced the US plan. Amir Peretz, leader of the center-left Labor-Gesher-Meretz alliance — instead of objecting to Trump’s plan and underlining support for a two-state solution — limited himself to a few vague words in which he called for a resumption of direct negotiations with the Palestinians and thanked Trump for his efforts. It was as if Peretz represented a ruling party and not a mere “technical bloc” predicted by the polls to garner only nine Knesset seats.

“Now it is clear, more than ever, that we need a diplomatic compass,” Peretz tweeted Jan. 28. “In the next government, Labor-Gesher-Meretz will lead the renewal of the peace process as [late Prime Minister Yitzhak] Rabin had conceived it. But no diplomatic program, even a revolutionary one, can move ahead one-sided. We thank President Trump for his honest efforts; after the elections, direct negotiations should be carried out with the states in the region, and with the Palestinian Authority.”

Peretz's tweet generated a flood of sharp responses from both the left and the right. Itzik Shmuli, chair of Labor's Knesset faction, was far less diplomatic than Peretz. He declared in a tweet, “The deal of the century is the fraud of the century that will not lead to peace, but to one-sided annexation and conflagration.” The next morning in a radio interview, Meretz head Nitzan Horowitz also adopted a blunter tone than Peretz in rejecting out of hand the provision to strip Arab Israelis of their citizenship. “It will never happen,” Horowitz asserted.

What was salient about all these statements as well as interviews by Labor and Meretz leaders is that they all highlighted the failures in Trump’s program, but there was no attempt to influence or mold the discourse. True to form, Gesher's leader, Orli Levy-Abekasis, kept mum on the issue.

Thus, confused Israelis sat in front of their screens watching their prime minister talk himself to death about “changing the face of history.” None of the opposition parties explained what they plan to do; none of them offered an alternative vision to Trump's; no one talked about crafting a solution that will actually lead to peace and security. This absence of ideas stood in stark contrast to the parties' modus operandi in recent years, with practically every senior Knesset member from the center-left having offered his or her very own peace plan. These “old” initiatives include Amir Peretz’s 2015 diplomatic program and one by Labor Knesset member Omer Bar-Lev that same year along with the Ten-Point outline by former Labor head Isaac Herzog in 2017.

Where are all these initiatives and programs today? Why have none of the speakers, tweeters and interviewees mentioned these initiatives? Why don’t they address existing plans, including the 2000 Clinton Parameters, the 2003 Geneva Initiative, the 2002 Arab Peace Initiative, and more. Don’t leaders on the political left understand that they have declined to their present status — with only nine mandates for two parties (plus Gesher) that once held almost 30 in 2015 — because in the last decade they were not able to explain to the Israeli public what exactly they advocate diplomatically and what their ultimate vision looks like for peace between Israel and the Palestinians? Blue and White does not have a detailed diplomatic vision, but it is not really running on advancing a diplomatic solution, but rather on “anything but Netanyahu.”

It appears that Labor-Gesher-Meretz Knesset members were also afraid to attack or even criticize Trump in their statements, tweets and announcements to the media. Why were they so concerned about the honor of the US president? Have they forgotten the last years of the Barack Obama era when Netanyahu did everything in his power to oppose Obama’s policy on Iran's nuclear program? Netanyahu believed that the nuclear deal signed in 2015 endangered Israeli security, so he made impressive (electoral) use of speeches and statements to Congress, Jewish organizations, the United Nations and the Knesset all aimed at Obama.

Now needs to be the finest hour of the Israeli left. An American president has presented an extremely problematic diplomatic program that could lead Israel into the abyss of a binational state, proposes the transfer of Israel’s Arab citizens, and in essence, eternalizes the conflict with the Palestinians. If the left feels that Trump's program endangers Israel’s future, why not say so directly, boldly and honestly? Why not disparage the crazy ideas born in essence in the Yesha Council, the settlement umbrella organization, and happily adopted by advocates of the settler lobby in the White House?

The right has not yet received a seal of approval from the Americans to immediately annex West Bank territories, but they are already using Trump's plan as insurance against any fair, stable agreement in the future. Under these circumstances, the left has nothing to lose, only something to gain. Anyone who wants to see a revival of the Israeli left must first and foremost develop a strategy, and be willing to lead and not be led, and suggest alternatives, not only criticize. At this point, the left continues to mark time and go nowhere in terms of its number of supporters as well as its ideology.