The 'deal of the century' presented by President Donald Trump is unlikely to bring about Israeli-Palestinian peace but serves first and foremost to boost the electoral fortunes of Benjamin Netanyahu, Israel's indicted prime minister. 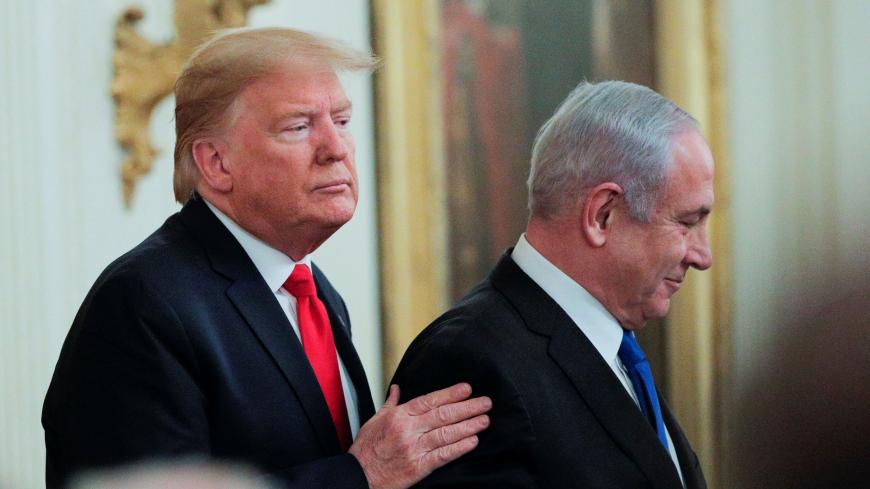 President Donald Trump’s “deal of the century” will probably not produce peace between Israel and the Palestinians. The plan unfreezes the West Bank real estate on which Israel has been building settlements for decades, allowing it to annex some 30% of West Bank territory, and perpetuates the reality of two peoples crowded together on a single piece of land, one of them the ruler, the other the ruled.

There is, however, another way of looking at the Jan. 28 unveiling of Trump’s plan: The Israeli political right under Prime Minister Benjamin Netanyahu gave a resounding “yes” to an American plan that includes the eventual establishment of an independent Palestinian state alongside Israel, the division of Jerusalem and territorial exchange. Trump’s blueprint is almost identical to the one Prime Minister Yitzhak Rabin charted out as the basis for negotiations with the Palestinians on the Oslo Accords (1993).

Rabin talked about a demilitarized “state minus” for the Palestinians on 75% of the West Bank. He pledged to preserve a unified Jerusalem as the capital of Israel, but hinted that under certain circumstances he would agree to cede parts of East Jerusalem to the Palestinians. Rabin did not, however, agree to territorial exchanges that would hand over chunks of sovereign Israeli territory, so in this sense, the Trump-Netanyahu plan to give the Palestinians land in the western Negev is even more far-reaching.

The question therefore arises as to why Rabin “had to be assassinated,” removed from the picture, almost 20 years ago. He was close to President Bill Clinton, almost to the same extent as Netanyahu is to Trump. Presumably, Clinton would not have sought to impose far-reaching concessions on Rabin to which he could not accede. From this perspective, what appears to be the ultimate victory for Netanyahu and the right is in principle a victory for the Israeli left: a solution comprising two states between the Jordan River and the Mediterranean with their capitals in Jerusalem. That said, the facts on the ground undermine the thesis.

Trump, inspired by Netanyahu’s people, presented a long and impossible list of conditions that the Palestinians must fulfill before they can declare a sovereign state. No Palestinian leader can accept the “deal of the century.” Even if one were found, there is no way he would be able to dismantle Hamas, demilitarize Gaza, halt financial support to the families of convicted terrorists and educate the younger Palestinian generation to love Israel, as per the plan’s dictates.

The above is why the majority of the Israeli right is ignoring the sticks in Trump's plan while loudly cheering the carrots. Netanyahu plans to annex all the Israeli settlements on the West Bank over the coming weeks and to celebrate this mind-boggling achievement all the way to election day, March 2. The opposition to the plan by the Judea and Samaria Settlement Council — because it theoretically allows for a Palestinian state — only helps him. It will divert a limited number of votes from the Likud to Yamina, the alliance of right-wing parties contesting the elections, but will also provide Netanyahu with inroads into the political center, recover some of the so-called soft Likud voters who abandoned the party in the two 2019 elections and perhaps win over some of those who voted for the rival centrist Blue and White.

Trump’s plan, in fact, was designed to salvage Netanyahu’s political career. It will not engender Israeli-Palestinian peace, but boost the prospects of Netanyahu being able to garner enough votes for the 61-seat Knesset majority he needs to form a government, a goal that eluded him in the two previous elections. The greatest magician ever to appear on the stage of Israeli politics has yet again extricated himself from his political grave.

What does Netanyahu ultimately get out of it all? In a historic twist of fate, Jan. 28 was at once the greatest day of Netanyahu’s life and the worst. Some 24 hours before the White House unveiling of Trump's plan, Netanyahu had announced from Washington that he was withdrawing his request for Knesset immunity from prosecution on three counts of corruption. Israeli Attorney General Avichai Mandelblit wasted not a single second in filing the indictment with the Jerusalem District Court, making Netanyahu the first incumbent prime minister in Israeli history to be officially charged in court with bribery, fraud and breach of trust.

There is no way back on the path Netanyahu has chosen. Netanyahu cannot ask the next Knesset for immunity once the indictment is served; his trial will take place. Even if the Likud wins 80 seats in March, Netanyahu will stand as a defendant in a criminal trial shortly thereafter. He might be the only person who sees a way to extricate himself from this dire strait; no one else can.

The centrist Blue and White, having smelled victory in recent weeks, was dealt a painful blow on the same day. By obtaining a separate meeting with Trump the day before the presentation of his plan, Blue and White Chair Benny Gantz managed to minimize the potential damage from the trap set by Netanyahu of portraying him as just another guest at the White House festivities, an extra on the set of Netanyahu’s great triumph. Gantz's escape, however, did not diminish Netanyahu’s East Room celebrations.

Gantz and the rest of his party's leadership attribute Trump’s dramatic last-minute rescue of Netanyahu to two ambassadors. “Ambassador [David] Friedman was the driving force behind the sensitive timing of the presidential move,” a Blue and White leadership source told Al-Monitor, speaking on the condition of anonymity. “Ambassador [Ron] Dermer is Netanyahu’s branch office at the White House, and he pulled all the strings.”

According to Blue and White sources, Trump’s son-in-law and special envoy, Jared Kushner, had objected to the publication of the plan so close to the Israeli elections because he thought the president would lose points and be perceived as meddling in Israeli politics. Netanyahu sidestepped Kushner, using all the tools at his disposal in Washington (and he has many), and the Trump gave in.

“That was why Kushner helped us get the separate meeting with Trump,” another top Blue and White official told Al-Monitor, speaking on the condition of anonymity. “When they realized that we were angry and did not intend to travel to Washington, it was Kushner who convinced the president to meet separately with Gantz in a dignified manner and rectify the impression.”

The impression of US presidential meddling may have been fixed, but the resonating effect of the political bang generated by the plan plays fully to Netanyahu’s electoral advantage. Blue and White has retreated to conduct a damage assessment. The party is in a bind. It can't reject Trump's plan after Gantz expressed his support for it and will also find it difficult to object to the annexation of West Bank territory as Netanyahu now plans.

Blue and White's leadership is mostly hoping the effect of the plan's presentation will dissipate in the coming days, and the political agenda will revert to Netanyahu’s indictment and upcoming criminal trial. This could allow them to mercifully resurrect the party's campaign slogan, “We Must Move Forward,” which they need because Netanyahu is the only one who has moved significantly in that direction in the past few days.