Did Netanyahu find his legacy with UAE deal?

The announcement yesterday on normalizing ties between Israel and the United Arab Emirates reflects Prime Minister Benjamin Netanyahu’s realization that he must abandon his annexation plan. 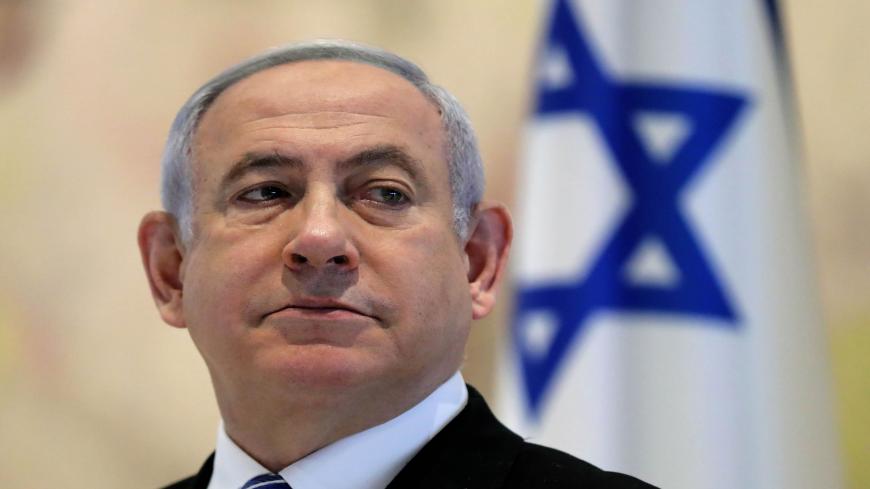 The feelings are mixed. On the one hand, Prime Minister Benjamin Netanyahu has finally found his historic legacy: Peace between Israel and the United Arab Emirates (UAE). On the other hand, the breakthrough was not the achievement to which he aspired. What he — and his voters — really wanted was to implement historic Israeli sovereignty over a significant part of the West Bank. That will no longer happen. The agreement with the UAE is a candy to dispel spreading bitterness, a pain relief tablet to ease the hangover plaguing Netanyahu’s electoral base since the heady White House event in late January at which the upcoming annexation was declared.

As strange as it sounds, the agreement with the UAE makes a fourth round of Israeli elections less likely. Netanyahu, who continues to decline in the polls — a Maariv media outlet poll gave his Likud party a record low of 27 Knesset seats Aug. 13 — knows the deal with the Emirates will not improve his standing within the center-left by a single vote, but could well deprive him of many right-wing votes.

Contacts with the UAE have been underway for over a year, especially via Emirati Ambassador in Washington Yousef Al-Otaiba and Israeli Ambassador to the US Ron Dermer. Israel and the UAE have been conducting a flourishing, largely covert relationship for over two decades. In recent years, the UAE had grown to be the Arab state closest to Israel among those that do not maintain official ties with the Jewish state. This clandestine romance has now gone public. In a conversation with Al-Monitor, a senior Israeli diplomatic said on condition of anonymity, "Israel has finally agreed to leave home and marry the mistress.” Asked what leaving home means, the source replied, “Forgetting its annexation intentions. … Netanyahu knows too that he cannot have both peace and annexation; he was forced to choose peace after realizing he could not achieve annexation.”

Paradoxically, the deal with the Emirates restores the principle most despised by Netanyahu and the political right: lands for peace. “He gave up lands,” a senior Netanyahu government source told Al-Monitor on condition of anonymity, “because he gave up the annexation that he had declared with great fanfare and in return received peace — or at least normalization.” That explains the reactions on his right, which range from chilly to furious. Settlement leaders vented their ire on social media, issuing militant declarations against Netanyahu. Within his Likud party, reactions are restrained and cynical. You promised annexation, his electoral base is telling Netanyahu; you delivered instead direct flights to Abu Dhabi.

The watershed moment that accelerated the US-facilitated contacts between Israel and the UAE occurred at the end of June during a visit to Jerusalem by US presidential envoy Avi Berkowitz. We will continue discussing the sovereignty issue in the coming days, Netanyahu’s office reported following the meetings with Berkowitz. It is now clear that the report was distorted.

As revealed in a previous Al-Monitor article, Berkowitz’s talks here over a month ago made clear that annexation was not a feasible option. Berkowitz, acting at the behest of President Donald Trump’s top aide and son-in-law Jared Kushner, made clear that if Israel wants to annex 30% of the West Bank, it would have to hand the Palestinians 6.5% of Area C (the 60% of the West Bank under complete Israeli control). Netanyahu was willing to give up only 0.5%. The Americans rejected his offer out of hand. The prime minister refused to commit publicly to implementation of Trump’s “deal of the century” for Israeli-Palestinian peace, which also entails eventual establishment of a Palestinian state of sorts, and everyone realized the annexation plan was dead in the water. It was time to chart a new course and salvage some achievement from the ruins of the annexation dream. That achievement was declared on Aug. 13: Israel and the UAE came out of the cupboard and placed their relationship on a formal footing.

In a twist of fate, much of the credit for this breakthrough goes to Netanyahu’s government partners, former military chiefs Foreign Minister Gabi Ashkenazi and Defense Minister Benny Gantz, leader of the centrist Blue and White party. Without them, there would not have been any official agreement with the UAE for the simple reason that they both took pains to block the annexation plans.

Although their efforts on this score were downplayed publicly to avoid angering Netanyahu, their influence was crucial. As soon as they took office in May — Gantz as defense minister and alternate prime minister and Ashkenazi as foreign minister — they made clear to the Trump administration that from then on, the Israeli government was no longer a one-man show, and it had two addresses. At the second address, Gantz and Ashkenazi expressed opposition to unilateral annexation and a preference for minimal annexation based on maximal negotiations, including a generous compensation package for the Palestinians. Berkowitz demanded that package of Netanyahu, who turned him down and paved the way for the alternative route.

In the evening hours of Aug. 13, Netanyahu faced the cameras seeking to project the air of Prime Minister Yitzhak Rabin after his signing of Israel’s 1994 peace treaty with Jordan and of Prime Minister Menachem Begin after his signing of the landmark 1979 peace treaty with Egypt. Netanyahu has earned this pose, although the deal with the small, distant principality that has never been at war with Israel is not comparable to the momentous peace treaties with two key enemy states on Israel’s doorstep.

Despite his self-aggrandizing declarations, Netanyahu knows the deal will erode his support among the settlers, his most important core constituency. It could boost his nonessential constituency on the center-left, but will weaken his domestic one (his Likud and settler base). All he can do now is wait for the polls. If his numbers continue to decline, he will think twice before risking elections. If the polls indicate a recovery, we may see Israelis going to the ballot boxes later this year, for the fourth time in 18 months.

Aug. 25 is the deadline for this crucial choice, the date on which the law stipulates the automatic disbanding of the legislature, resulting in new elections if lawmakers fail to approve the state budget. As always, Netanyahu will decide at the last minute, torn all the way between his history aspirations and hysteric inclinations until just before the buzzer sounds. The bets are currently on his backing a compromise proposal put forth by coalition Knesset members Zvi Hauser and Yoaz Hendel to postpone the legal budget deadline, gaining two months before the government’s possible demise. After that, no one can really tell.