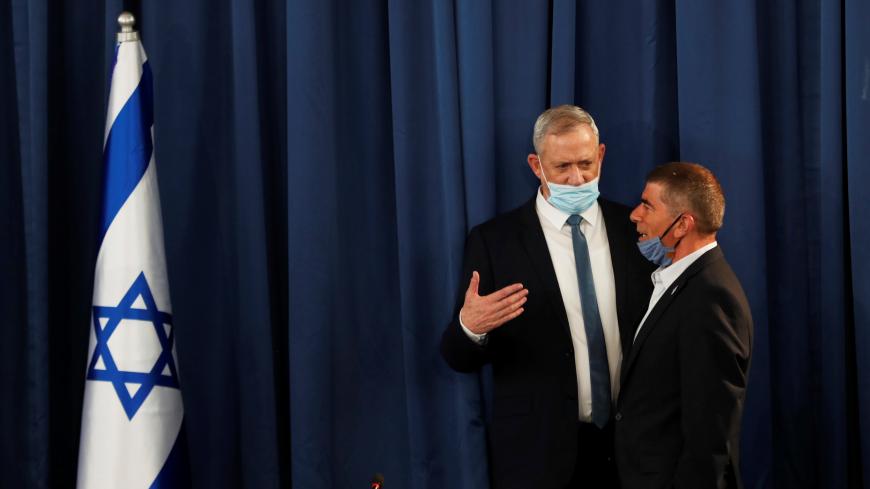 Two former military chiefs, Defense Minister Benny Gantz and Foreign Minister Gabi Ashkenazi, hold the key to Israeli annexation of West Bank lands. The two have managed to position themselves in Washington as crucial to any decision on the annexation plan. Taking advantage of the leadership's preoccupation with the novel coronavirus and police brutality crises, they have managed to reach an understanding with the Donald Trump administration according to which President Donald Trump will support any Israeli decision on annexation as long as it enjoys the full backing of both government parties — Prime Minister Benjamin Netanyahu’s Likud and Gantz and Ashkenazi’s Blue and White.

The two Blue and White leaders enjoy direct access to close Trump associates such as his son-in-law Jared Kushner and Avi Berkowitz, who replaced Jason Greenblatt as the special US envoy to the Mideast. Presumably, one of the two informed Gantz and Ashkenazi that the Americans would support any decision Israel makes as long as Blue and White does, too. As an associate of Blue and White leaders put it to Al-Monitor this week on condition of anonymity, “We have received veto power; we are not sure we will use it.”

Gantz and Ashkenazi seem torn. Gantz met on June 10 with settlement leaders. It could have been a tense, loud meeting, with battle lines drawn between settler leaders demanding full Israeli sovereignty over their settlements in the West Bank and the man representing opposition to such a move. In fact, the tone was low key. Gantz appeared to suggest he was seriously considering support for annexation, albeit not of all the territory the settlers want. Gantz is hard to read. Not all his hints and mumblings translate into actions. This weekend he will get together with Ashkenazi to come up with a coherent position ahead of scheduled discussions with Netanyahu next week.

At the same time, the heads of Israel’s security agencies — IDF Chief of Staff Lt. Gen. Aviv Kochavi, Mossad head Yossi Cohen, Shin Bet director Nadav Argaman and Military Intelligence head Maj. Gen. Tamir Heyman — will brief the security cabinet on the potential repercussions of annexation. A decision will follow these deliberations but even then, Trump’s wishes may not be clear, as he is even harder to gauge than Gantz. According to indications from Washington, Trump’s Christian evangelical base is currently less concerned with the annexation issue. The domestic unrest, economic crisis, rioting and upcoming elections are all sidelining Israel and its issues and placing the entire move in question.

“One thing is certain,” another senior Blue and White source told Al-Monitor on condition of anonymity. “Full annexation of 30% [of the West Bank] as prescribed by the Trump plan will not happen.” It's also safe to assume the two former military chiefs are unlikely to dismiss the recommendations of the security agency leaders. Ashkenazi and Gantz won't ignore warnings by Kochavi and his colleagues of potential security escalation and the possibly heavy toll and high cost of annexation. Next month we will know where all this is going. An educated guess has it that if Israel decides to annex some territory, it will be far smaller than the settlers expect and far from the 30% for which the American blueprint provides.

Gantz and Ashkenazi appear far better versed in the drawbacks of annexation than in its possible advantages. “The Americans promised to bring on board the Arab world, at least most of it,” a security source following the latest developments told Al-Monitor this morning on condition of anonymity. “The fact is they did not. Not one prominent Arab leader supports the move,” the source said and pointed to the unprecedented June 12 op-ed by the ambassador of the United Arab Emirates in Washington, Yousef al-Otaiba, in an Israeli newspaper urging Israel to avoid annexation.

German Foreign Minister Heiko Maas rushed to Israel this week to meet his newly appointed counterpart Ashkenazi as well as Gantz and Netanyahu. The German minister, too, came to warn against the annexation and its repercussions in a visit that to some extent clarified the international picture. After the visit, a political source told Al-Monitor on condition of anonymity that Germany would “not impose sanctions on Israel and will not recognize a Palestinian state if one is declared following annexation.” Nonetheless, the source added, “they did warn of serious damage to Israeli interests and a negative impact for Israel’s standing in Europe.”

Blue and White is particularly concerned about the Palestinian Authority’s efforts to convince the International Criminal Court to try Israel for war crimes. “This move is going ahead and the annexation could serve to accelerate and finalize it,” the political source said. “This is not something that can be ignored.”

A senior Blue and White source said on condition of anonymity, “As of now, other than the US, not a single state in the world supports annexation. Not China, not Russia, not the Europeans, not Japan. This remains between Netanyahu and Trump, and we are not sure just where Trump stands at the moment.”

What, then, is the bottom line? Gantz and Ashkenazi will have a hard time blocking some form of annexation. They know this is a historic, unique opportunity and understand the historic value of annexing several of the settlement blocs. On the other hand, they realize that the stability of the regime in Jordan is no less and perhaps more important than annexation of the Jordan Valley.

Gantz and Ashkenazi are now closely monitoring the lines being drawn. The map laying out the potential for annexation along with a Palestinian state under the US plan was superficial and imprecise. A team in the prime minister’s office is now drawing up the real map. It will be modular in nature, presenting all annexation options: Full, almost full, partial or minimal. It will also try to determine how many Palestinians live in each of the territorial options for annexation and attempt to delineate the enclaves of isolated Israeli settlements as well as access roads. The proper preparation of such a map would take months. The team is in a race against the clock.

Eventually, Blue and White will probably support partial annexation of several settlement blocs that enjoy broad Israeli consensus, in addition to a generous compensation package for the Palestinians of the type Defense Minister Avigdor Liberman proposed in 2017. Netanyahu’s right-wing cabinet rejected the so-called “Qalqilya plan” at the time. Gantz and Ashkenazi estimate that if Israel gives the Palestinians extensive lands in the West Bank’s Area C on which to develop the Palestinian towns of Qalqilya and Jenin, along with a tempting economic compensation package, the annexation could cautiously proceed.