While Prime Minister Benjamin Netanyahu produces excuses and scapegoats, the only way for his annexation plan to stay alive is if President Donald Trump decides it can help him get reelected. 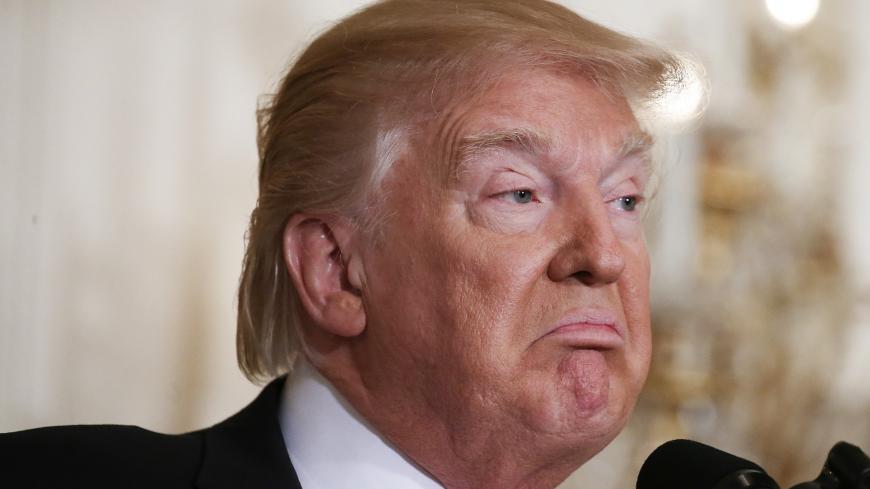 US President Donald Trump stands during a news conference at the White House on Feb. 16, 2017, in Washington, DC. - Mario Tama/Getty Images

Prime Minister Benjamin Netanyahu said on Aug. 2 that the annexation of West Bank areas is still on the agenda and awaiting an American go-ahead. In his remarks to Likud Knesset members, Netanyahu sought to give himself an alibi for the fiasco that is causing him significant damage and could be disastrous for him if he drags Israelis to a fourth round of elections before year’s end.

The prospects of imposing Israeli sovereignty over 30% of the West Bank arose in late January, when President Donald Trump unveiled his “deal of the century” for Israeli-Palestinian peace. The administration announced that Israel could annex the territory within the framework of the plan. The political right reacted with unbridled enthusiasm that Netanyahu milked for all its was worth in the lead-up to the March 2 elections.

Seven months have elapsed, and the annexation hype has gone silent. Netanyahu is trying to absolve himself of responsibility for the collapse of his pledge to the right-wing electorate, a tale of greed, policy and the vagaries of Middle Eastern reality.

The annexation plan was last seen on the final weekend of June, when presidential envoy for the Middle East Avi Berkowitz, who replaced Trump’s previous appointee Jason Greenblatt, visited Israel for talks with Netanyahu and other top leaders. Despite his promise that the administration would conduct follow-up discussions on annexation after his return to Washington, the issue has fizzled.

“The only way this could happen before elections in Israel,” a senior Israeli diplomatic source told Al-Monitor on condition of anonymity, “would be for someone to convince President Trump that annexation could boost his prospects for a November victory.” The source went on to assess the chances of such a thing as very low. “Even evangelical voters are no longer what they once were. They are now focused on the corona crisis and the economic situation in the US more than on issues related to the Holy Land,” he said.

Since the unveiling of the Trump plan, a fierce internal struggle has been waged within the administration. A top Israeli security source told Al-Monitor on condition of anonymity that the argument between US Ambassador to Israel David Friedman and Trump’s adviser and son-in-law Jared Kushner has spread to other administration corridors and departments. The head of the CIA station in Tel Aviv has expressed vehement disagreement with Friedman's insistence that some moderate Sunni states could be convinced to express a certain measure of support for annexation, or at least to downplay opposition to the controversial move. According to Friedman, the Arab world will swallow the annexation without any major problems. The US intelligence agency thinks otherwise. Kushner vacillated but eventually moved over to the side of the opponents, given the harsh reactions from the Gulf states, Egypt and especially Jordan.

Their talks with senior Israeli politicians and officials showed the Americans the extent of the division within Israel over the annexation issue. The heads of the Blue and White Party, former army chiefs Benny Gantz and Gabi Ashkenazi, told the Americans that annexation would have to be “measured and mutual” and Israel would have to give the Palestinian Authority some West Bank areas currently under its control in return. The compensation would also have to include the so-called “Qalqilya” plan, handing the PA territory on which to expand the Palestinian towns adjacent to the Israeli border. The plan, proposed by Yisrael Beitenu leader Avigdor Liberman several years ago, was shelved because of right-wing opposition.

The main drama of recent months occurred over Berkowitz’ round of talks with the Israelis in late June. Administration officials had firmed up their position ahead of the visit, conditioning US approval for annexation on significant Israeli gestures toward the PA. The Americans talked about handing the Palestinians some 6.5% of the West Bank’s Area C as an expression of Israel’s commitment to the two-state solution. The Americans also demanded that Netanyahu accept President Trump’s plan in full and commit to the two-state solution.

However, the Israeli side was only willing to offer some limited concessions. Israel proposed handing the Palestinians 0.5% of Area C. Netanyahu was not keen on publicly accepting Trump's deal as a binding plan. Meanwhile, opposition within his electoral base was growing, as some settler leaders argued that the annexation plan meant acceptance of the two-state solution.

Israel’s tight-fistedness resulted in the de facto shelving of the entire Trump plan. Senior Israeli sources say that since Berkowitz returned to Washington, no follow-up discussion of the annexation option has taken place in the White House.

“Obviously, handing the Palestinians some 6% of Area C would not have satisfied Palestinian President Mahmoud Abbas,” a senior Israeli political source told Al-Monitor on condition of anonymity, “But it would have at least calmed the Arab world and created a chance of implementing the annexation relatively smoothly. Israel’s refusal to agree even to this little bit dealt the plan a kiss of death.”

Kushner’s approach has won over that of Friedman, who some in Jerusalem consider the US ambassador to the settlements. Nonetheless, the demise of the plan has not been made official. Israeli Ambassador to the United States Ron Dermer continues to try to convince the president that annexation could help him get out the Christian evangelical vote on Nov. 3. If new elections are scheduled in Israel and held in tandem with the US vote, we can expect these efforts to intensify. The annexation issue will not be over until both leaders, face their electoral challenges.