According to American sources, the peace plan elaborated by the Trump administration will offer Palestinians limited sovereignty on limited territory. 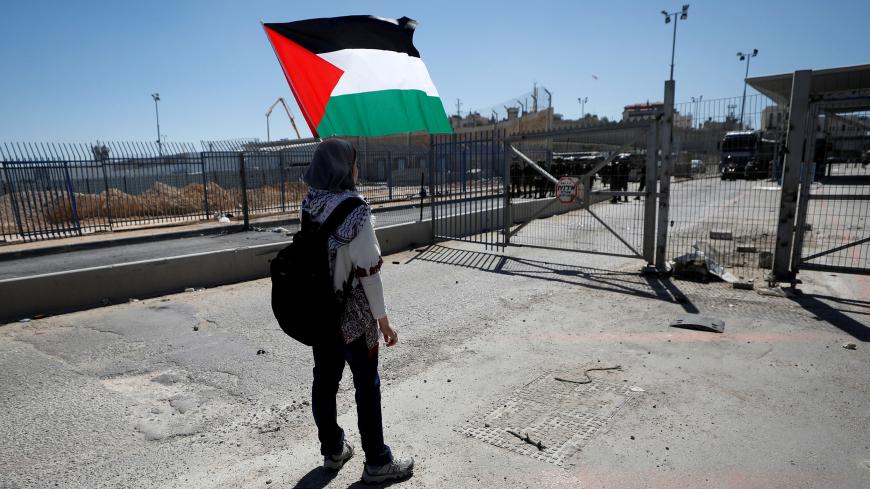 A girl holds a Palestinian flag in front of Israeli troops during clashes at a protest against US President Donald Trump's decision on Jerusalem ahead of International Women's Day, in Ramallah, in the occupied West Bank, March 7, 2018. - REUTERS/Mohamad Torokman

Despite growing tensions with the Palestinians, US President Donald Trump still intends to reveal a US peace plan for the Middle East. The plan will apparently be divulged right after the US Embassy moves to Jerusalem and after Trump’s meeting with North Korean leader Kim Jong Un.

According to a senior US diplomat in Tel Aviv, the fact that Palestinian President Mahmoud Abbas refuses any contact on the matter with US officials and that he had bad mouthed David Friedman, the US ambassador to Israel, has not altered Trump’s determination. Actually, messages on the evolving plans are conveyed nowadays to Ramallah by Egypt, Jordan and Saudi Arabia. More so, the March 20 meeting in Washington between Trump and Saudi Crown Prince Mohammed bin Salman was largely dedicated to two major topics: the common front against Iran in the region (including the Iran nuclear deal issue) and Israeli-Palestinian peace.

The US diplomat explained that the White House strategy on the Israeli-Palestinian issue is based on a conservative regional view. The first priority of the White House is to curb Iran’s ambitions for nuclear weapons and its ambition to become the dominant regional player with its allies — Syria, Hezbollah and Hamas. Given this strategy, the United States seeks an informal alliance of interests between itself, Israel, Egypt, Jordan and Saudi Arabia.

The potential Arab partners to such an alignment of forces have made it clear to Washington that this cannot happen without progress on the Palestinian issue. This is well-understood by Mike Pompeo, who, if confirmed, will replace Rex Tillerson as secretary of state.

On the other hand, the US alliance with Israel is considered by the White House as both a cornerstone of its foreign policy strategy and a domestic cornerstone (vis-a-vis the US Jewish and evangelical communities). The White House believes that the relocation of the US Embassy from Tel Aviv to Jerusalem will make it difficult for Prime Minister Benjamin Netanyahu to reject a Trump peace plan.

The US diplomat added that intense coordination talks are taking place on a regular basis between the US team of Jared Kushner, Jason Greenblatt and Friedman and the prime minister’s office in Jerusalem. Netanyahu has indicated that his response will be positive with reservations.

Diplomatic sources affirm that the plan itself is much closer to Israel’s positions than to the Palestinian positions. A two-state solution would be proposed in a way that Netanyahu could accept. The Palestinian state will have limited sovereignty on limited territory (about half of the West Bank and all of the Gaza Strip), with Israel responsible for security for much of the West Bank and the border passages. The Jordan Valley will be under Israeli jurisdiction with an Israeli military presence. Palestinian East Jerusalem neighborhoods will be part of the Palestinian state, but not the Old City, except for religious jurisdiction on the mosques together with Jordan. It would be proposed that the Palestinians adopt East Jerusalem neighborhood Abu Dis as their capital. Gaza will be part of the Palestinian state provided that Hamas is disarmed.

Also, according to the sources, there will be no right of return to sovereign Israel for Palestinian refugees. A compensation mechanism for refugees will be established by the international community.

The White House plans to offer the Palestinians a very significant economic assistance package. This package would engage the United States, the European Union and Saudi Arabia. Regional anti-terror cooperation as well as regional normalization with Israel will take place, according to the 2002 Arab Peace Initiative.

On the basis of this plan, the parties will negotiate a detailed agreement, to be reached by 2021.

A senior Israeli Ministry of Foreign Affairs official said there is close coordination between Washington and Jerusalem on an eventual plan, and it is not really clear yet whether and when it will be made public. Indeed, Trump wants to avoid an outright Palestinian rejection, sending warnings to Abbas on the matter through Egypt and Saudi Arabia.

The Israeli official said on condition of anonymity that in any case, Netanyahu will present a positive attitude toward an eventual plan, with detailed reservations in order to keep his coalition intact.

A senior PLO official close to Abbas told Al-Monitor that Abbas has lost any confidence in Trump as an honest broker, and he will galvanize his Arab partners for a rejection of the plan, yet outlining in a positive spirit the Palestinian positions.

Bearing the reactions of both sides and the current situation on the ground, there seems to be very little light at the end of the tunnel.