With Israeli Prime Minister Benjamin Netanyahu troubled by internal affairs, he might agree to the launching of US President Donald Trump's Middle East peace initiative. 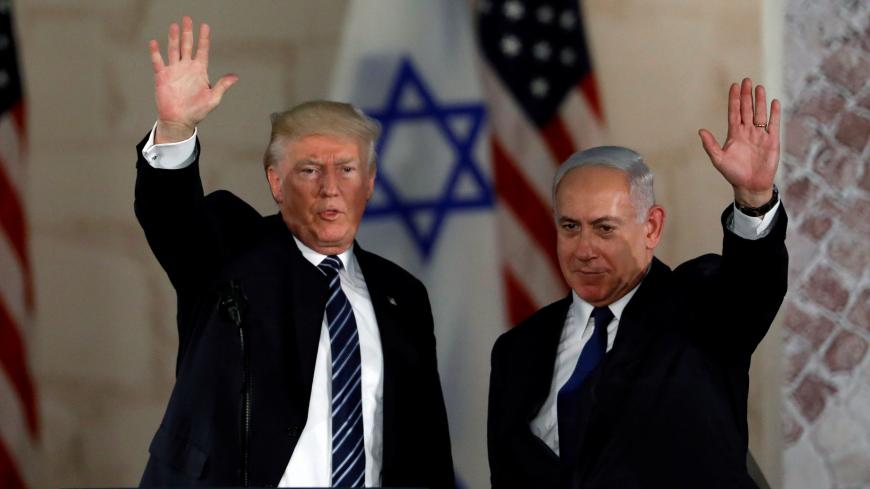 US President Donald Trump and Israeli Prime Minister Benjamin Netanyahu wave after Trump's address at the Israel Museum in Jerusalem, May 23, 2017. - REUTERS/Ronen Zvulun

According to a senior Israeli Ministry of Foreign Affairs official who spoke to Al-Monitor on condition of anonymity, Prime Minister Benjamin Netanyahu intends to react to a possible US peace plan "more positively than expected; perhaps even with a yes." Still, the official emphasized that Netanyahu does not want a two-state solution. The most he is ready to accept is a Palestinian state with limited sovereignty, providing that all of the West Bank remains under Israel's security control.

Following developments in Kurdistan and Catalonia, Netanyahu told his inner circle that Israel will publicly question the notion of sovereignty for all; definitely the notion of full sovereignty. He is actually thinking of a Palestinian autonomy plan, according to parameters acceptable by his right-wing coalition, although obviously unacceptable by the Palestinians.

The official said that intense deliberations are taking place between Jerusalem and Washington. On the Israeli side, it is the prime minister's office and Israel's Ambassador to the US Ron Dermer. On the American side, it is the Middle East peace team, with its two key players — White House senior adviser Jared Kushner and Middle East envoy Jason Greenblatt. Apparently, the administration is getting ready to announce a proposal for Israeli-Palestinian peace with a regional — mainly Saudi — component and with regional cooperation on the anti-fundamentalism front.

Netanyahu is interested in the regional anti-Iran cooperation while paying a minimal "price" on the Palestinian issue, so that he would maintain his special relationship with US President Donald Trump.

A senior US diplomat in Tel Aviv told Al-Monitor that the US Embassy in Tel Aviv, the Consulate General in Jerusalem and Greenblatt are all spending much time and effort to advance a rapprochement between the parties and agreement on general guidelines for a regional framework.

The diplomat noted that these efforts are developed specifically according to the orders of the president, with a significant involvement of national security adviser Gen. H.R. McMaster.

The administration would like to present a different approach to conflict resolution, compared with the Barack Obama and Bill Clinton administrations. While the previous Democratic Party administrations were under the impression that Israeli-Palestinian diplomatic progress would lead to regional cooperation, the Trump administration believes in an opposite dynamic, where regional cooperation based on the Riyadh declaration will led to Israeli-Palestinian negotiations. Trump and his national security team believe there is a common interest on the pragmatic side of the region, led by Egypt and Saudi Arabia (championed by Crown Prince Mohammed bin Salman), to weaken the Iranian regional expansion ambition and to fight radical terror. Such a common interest could also bring about Israeli-Palestinian negotiations.

According to the American diplomat, ever since the Fatah-Hamas reconciliation, Egyptian President Abdel Fattah al-Sisi has become a key player in the process, alongside the Saudi crown prince. Egypt also sides with Saudi Arabia in its war in Yemen and its anti-Hezbollah policies.

The American plan will most probably be made public in the weeks to come, and it will be of a regional nature. It will emphasize regional cooperation against radical Islamists and Iranian ambitions. The United States will lead cooperative measures and consultations with Egypt, Saudi Arabia, Jordan, the Palestinian Authority and Israel.

Israeli-Palestinian peace negotiations should take place within this context to bring about regional peace.

This is an ambitious plan, yet according to the American diplomat, a feasible one; it does not impose or rule out a two-state solution.

The plan restrains settlement expansion and incitement to violence. It also includes rigid security and anti-terror measures for Israel for the long run and rejects the right of return for Palestinian refugees. The plan refers to Jerusalem only in a religious sense.

A major emphasis will be placed on economic investments for the Palestinians, as well as regional cooperation, anti-terror measures and normalization of relations between the Arab states and Israel, on the basis of the 2002 Saudi peace initiative.

As expected, the Palestinian leadership is still suspicious about the United States’ intentions. A senior PLO official noted on condition of anonymity, "While Trump is clearly in Israel's camp, we will coordinate our reactions with Egypt and Saudi Arabia."

Another Israeli Ministry of Foreign Affairs official told Al-Monitor that the Israeli reaction is expected to be more nuanced. He agreed with his colleague (at the beginning of this article) and confirmed that Netanyahu is ready to engage positively with an American initiative leading to Israeli-Palestinian negotiations, provided that Israel's security control in the West Bank is maintained within a new agreement and that regional peace would strengthen Israel's security and anti-terror stance. Netanyahu, he noted, had said so to the American envoys.

And so, Jerusalem seems to be refocusing its agenda — a shift that might be influenced by the prime minister's troubles in other areas.