Palestinian leadership hopes that US President Donald Trump’s upcoming regional visit will advance the launching of a peace process based on the 2002 Arab Peace Initiative. 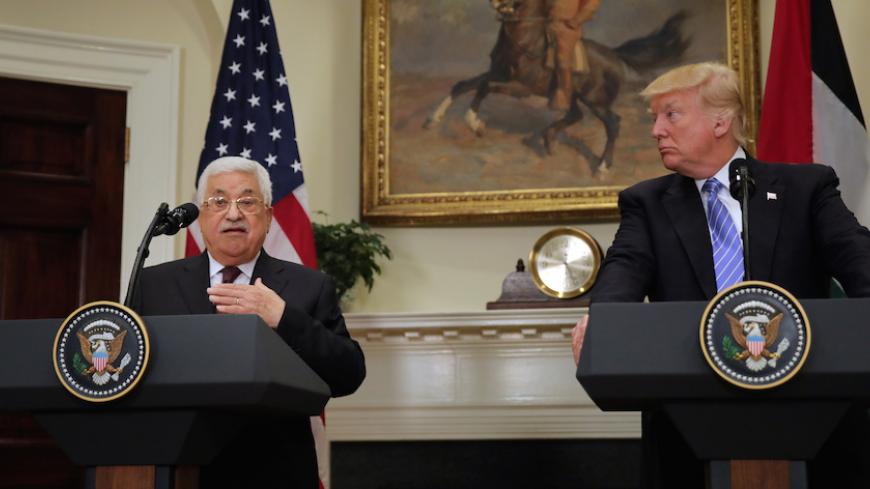 Palestinian President Mahmoud Abbas, accompanied by US President Donald Trump, delivers a statement during a visit to the White House in Washington, May 3, 2017. - REUTERS/Carlos Barria

Following the May 3 meeting between Palestinian President Mahmoud Abbas and US President Donald Trump, the Palestinian leadership expects US shuttle diplomacy to be launched in June on the Israeli-Palestinian issue. Abbas received the red carpet treatment in Washington, and Trump showed public warmth toward him and even praised him for the Oslo Accord. More so, Abbas was encouraged by the content of his meeting in the Oval Office.

Still, a senior PLO official close to Abbas told Al-Monitor that despite the positive impressions of his meeting with Trump, Abbas came back to Ramallah with more questions than answers. Abbas’ entourage believes that their strategy to embrace Trump and take him at his word on the ultimate deal will actually bear fruit. The analysis in Ramallah is that the Trump administration has decided to explore the possibility of starting a peace process in the months to come. They estimate that during his May 20 visit to the region, Trump will balance his pro-Israel attitude with a rapprochement to some of the Arab positions. What remains open is his real intent beyond launching a peace process, and if he himself will engage in negotiations.

The Palestinians know that Trump works closely with his son-in-law Jared Kushner, international negotiations envoy Jason Greenblatt, national security adviser H.R. McMaster and Secretary of State Rex Tillerson. As to the May 20 trip, Abbas is encouraged by the fact that Trump’s first visit as president is to Saudi Arabia, and that in this first visit abroad the president also plans to visit the Palestinian Authority. This seems especially encouraging with a president who was considered — upon taking office — as holding views close to those of the Israeli pro-settlement Habayit HaYehudi party and as being Islamophobic in his values.

Based on Abbas’ Washington meetings, Ramallah believes that the aims of Trump’s regional visit are multiple. The US president wants to appear to be a man of peace. Visiting Riyadh, Jerusalem, Bethlehem and the Vatican is designed to reflect an image of global peacemaker in the face of radical fundamentalist Islam. Ramallah also believes that Trump wants to fortify the anti-Islamic State coalition with the pragmatic Arab states, primarily Egypt and Jordan. He wants to signal strong opposition to Iran in relation to its regional ambitions, arms development and sponsorship of terror. Following that line, Trump wants to signal to the American Jewish community his resolute commitment to Israel’s security. The Palestinians assume that Trump will leave the US Embassy in Tel Aviv, but may offer recognition of West Jerusalem as Israel’s capital. In addition, Ramallah estimates that Trump intends to accept the Arab Peace Initiative of 2002 as one of the bases for a regional initiative on Israeli-Palestinian peace.

According to the PLO official, it was Abbas who raised the 2002 Arab initiative in the Oval Office, and he received no negative reactions, neither from the president nor from his advisers. The official is confident that Trump now understands that there is no alternative to a two-state solution. He said that Trump also shared with his Palestinian guests that he will continue to resist settlement expansion.

A senior Israeli Foreign Ministry official aware of the preparations for Trump’s visit told Al-Monitor that Prime Minister Benjamin Netanyahu is confident that he can convince Trump to stay away from any new peace process initiative based on the Arab initiative. The official believes that Trump’s visit to Israel is in keeping with his campaign promise to be Israel’s best ally and to make a statement on the recognition of Jerusalem as Israel’s capital. On the issues related to the peace process, the official sounded condescending, sayung, “Netanyahu is at his best when it comes to negotiating with the US terms for a peace conference framework. Just as he convinced Trump’s predecessors, we have no doubt that he will convince the Trump administration that vis-a-vis a pragmatic Netanyahu, there is no Palestinian partner. Trump will understand that at the end of the day, the Palestinians will say no again.”

The senior PLO official is convinced of Abbas’ awareness that there will be no two-state solution as long as Netanyahu is prime minister. The Palestinian diplomatic aim is to convince the United States and the international community that there is a link between the fight against the Islamic State and the Palestinian issue, and therefore, the Arab Peace Initiative must be internationally recognized. As for the near future, the official said that depending on Trump’s actions after the visit, we will see if the next Palestinian steps are in the realm of diplomacy or of resistance to the 50-year-old occupation.

On the Palestinian side, the best-case scenario expected by the PLO official is that of US shuttle diplomacy being launched shortly after the visit, headed either by Greenblatt or by a more senior member of the administration.