Palestinian President Mahmoud Abbas is conducting consultations with Egypt, Jordan and Saudi Arabia in order to present US President Donald Trump with a united Arab position for the two-state solution. 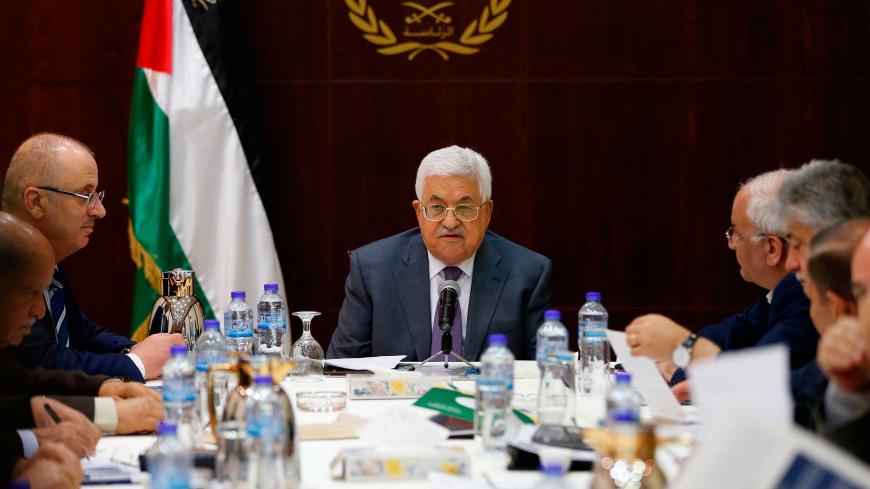 On the sidelines of the UN General Assembly meeting this month, US President Donald Trump will hold meetings with Israeli Prime Minister Benjamin Netanyahu and Palestinian President Mahmoud Abbas. Yet it is hard to see how Trump’s mind could focus on the most intractable issue in international affairs, when one party — Israel — is not interested in engaging in any peace talks, and the other side is domestically threatened by hard-liners who object to any Netanyahu-Abbas meeting.

A senior US State Department official who recently visited the region told Al-Monitor on condition of anonymity that when it comes to the Israeli-Palestinian issue, things at the State Department are quite chaotic. There is no coherent Middle East policy, and most decisions are made by the White House, or more precisely within the Oval Office. Secretary of State Rex Tillerson is probably the most sidelined secretary of state on the Israeli-Palestinian issue in a very long time.

Still, the official cautioned against underestimating Trump’s ambitions to reach a visible achievement on the issue. The way he sees it, Trump’s team headed by Jarred Kushner and Jason Greenblatt is exploring two tracks of progress.

The first progress track considered by the White House is confidence-building measures in the fields of security cooperation, economic arrangements (such as facilitating trade and meetings between businesspeople on both sides), Palestinian construction permits in the Israeli-controlled West Bank Area C, as well as restraining Palestinian incitement to violence and Israeli settlement expansion.

The second track considered is exploring and composing different formulas that could serve as a basis for possible future peace negotiations.

The senior State Department official believes that these formulas would be general in nature, such as searching for a peace deal that would end the conflict, mutual recognition between Israel and the future Palestinian state, mutual security and regional counterterrorism cooperation against radical Islam, Israeli cooperation with the pragmatic Sunni countries, etc.

On the issue of a two-state solution, the US administration does not rule it out. Still, no official declaration of supporting it was made, and it is only in private talks with Ramallah that the administration has accepted that there is probably no other relevant alternative.

A senior PLO member told Al-Monitor that with these circumstances in place, the Palestinian leadership has made it clear to the Washington envoys that it will engage in such a process, provided the administration accepts four important principles: The Palestinians demand that Washington publicly agrees to and embraces the two-state solution, accepts the 2002 Arab Peace Initiative as basis for negotiations, adopts the principle of security for both sides and insists on Israel freezing settlement activity.

According to the PLO official, Abbas will come in a positive spirit to meet with Trump, as he sees no alternative to the US initiative on the international scene. The PLO official also said that Ramallah will coordinate its next steps with Egypt, Jordan and Saudi Arabia. The idea is for Abbas to arrive to his meeting with Trump with a united Arab position, hoping to link progress on the Palestinian issue with progress on the anti-radical Islam and Iran issues. According to the official, Abbas will propose to Trump that senior Palestinian negotiators be dispatched to Washington to meet periodically with US officials and possibly with Israeli officials, so as to set a process in motion.

A senior Israeli Ministry of Foreign Affairs official told Al-Monitor that Netanyahu is preparing for his meeting with Trump and that he is in constant personal contact with both Kushner and US Ambassador to Israel David Friedman. For Netanyahu, said the Israeli official, the Palestinian issue is not of pivotal importance. Iran is, and so is the expansion of Shiite influence from Tehran to Beirut. With the issue of the nuclear Iran agreement back in the headlines, the Israeli prime minister will ask the president to use American clout to restrain Iran’s support of terror activities and the delivery of missiles to Hezbollah.

Netanyahu will claim in the meeting that the Palestinian issue is a nonstarter given the weak domestic position of Abbas, and he will also highlight his own domestic political problems. And so, if any progress is to be made on the Israeli-Palestinian issue, it must be propelled by Egypt, Jordan and Saudi Arabia. Will Egyptian President Abdel Fattah al-Sisi, Jordanian King Abdullah II and Saudi King Salman bin Abdul-Aziz Al Saud exert real pressure on progress toward a two-state solution, or just pay the traditional lip service for their public’s opinion? Will they condition greater cooperation on the anti-terror front in exchange for progress on Israeli-Palestinian talks? Israel and the Palestinians diverge on this point.

According to the PLO official, Abbas believes that the Arab pragmatic states will feature a united front vis-a-vis the United States during the UN General Assembly meeting. He said that “it is the last chance for diplomacy.”