The Palestinian leadership believes that much of the Trump administration’s efforts on the Israeli-Palestinian issue are focused on economic confidence-building measures, not advancing the two-state solution. 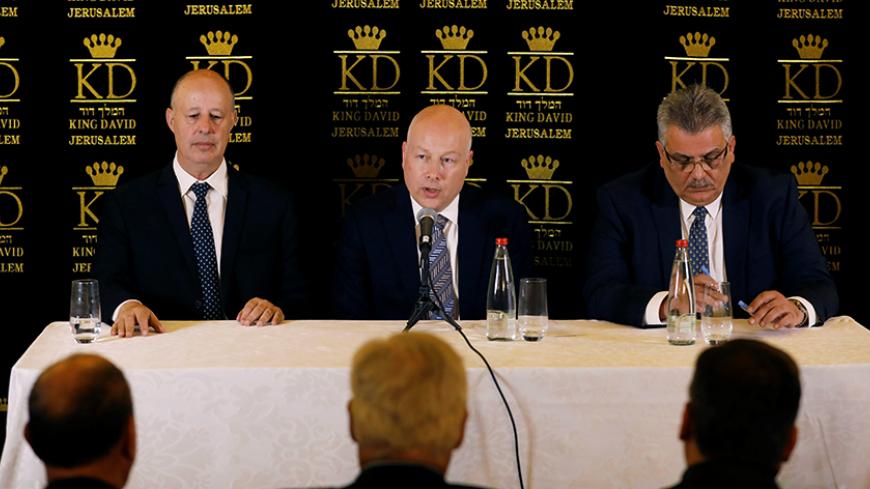 A senior PLO official told Al-Monitor that the diplomatic process taking place between the Palestinians, Israel and the United States can be defined as a fierce brainstorming as to who will be blamed by the Trump administration for the ultimate failure of its peace efforts. The official, who took part in the latest round of talks held by US presidential envoy Jason Greenblatt, said with cynicism on condition of anonymity, “Trust the US, it will be the Palestinians’ fault.” He added that having learned how President Donald Trump acts, the Palestinians do not expect an acknowledgment of failure, as with former President Barack Obama. Instead, the administration will probably state that progress has been made and that efforts continue.

With these words, one can detect a new tone in Ramallah in recent days — greater pessimism bordering on despair. The Palestinian leadership is witnessing that much of the Trump administration’s efforts are focused on economic confidence-building measures. One such measure is building permits in the Israeli-controlled West Bank Area C, including the Qalqilya expansion plan, which is contested by some Israeli Cabinet ministers. Another measure is the plans for improving the West Bank water supply by creating a canal from the Red Sea to the Dead Sea in coordination with Jordan and the World Bank. The PLO official said, “The notion of economic peace plays right into [Prime Minister Benjamin] Netanyahu’s hands and policies — anything but a two-state solution.”

The Palestinians didn’t have much luck with the US envoy, especially since he was accompanied in the last round of talks on July 11 by US Ambassador to Israel David Friedman. They felt that with Friedman accredited to Israel only, so are his views. And so, the talks had little chance to progress. Ramallah leadership assesses that there are no concrete plans by the administration to launch negotiations, except to emphasize how important it is to the president. The PLO official said bitterly, “We begin to sense that the talks are merely supposed to generate a positive impression of the US in Riyadh and in Cairo. We will not continue to play this window dressing role for very long.”

The PLO official stressed that while there is good communication with Israel on tactical issues between security officers and officials, Netanyahu’s Israel is deaf on the potential negotiation process.

Despite his past moderate, pragmatic and even creative positions on the two-state solution, the senior PLO official now sounded alarmist about a possible outbreak of violence from the Gaza Strip and possibly also from the West Bank. He argued that if Israelis think that Palestinians have accepted the occupation in any way, they are wrong. That is not the case. “While the mainstream Palestinian constituency is ready to give diplomacy a chance, and also give some credit to President Trump, we are nearing a breaking point after which a violent uprising in the form of sporadic attacks on Israelis or an armed intifada may be possible. This situation is also being inflamed by Hamas, given the severe economic conditions in the Gaza Strip.”

Indeed, the outbreak of violence after the July 14 incident at the Temple Mount/Haram al-Sharif, Israel's attempt to alter the status quo at the mosques and the terror attack againt Israelis at the Halamish settement on July 21, should sound alarm bells in Israel. Another Al-Aqsa intifada is not out of the question.

Ramallah believes that decision time for this crossroads between diplomacy and violence will come after the UN General Assembly annual meeting in September. Or as the PLO official put it, “This is our deadline, and we have informed our Arab partners that we see this date as the last chance for a successful diplomatic launch toward a two-state solution.”

A senior Israeli Ministry of Foreign Affairs official who also took part in the talks with Greenblatt told Al-Monitor that Netanyahu is pleased with talks on economic confidence measures, yet these are conditioned on Palestinian President Mahmoud Abbas taking stricter measures on stopping official Palestinian incitement to violence. He stressed that this condition is ever more essential in the aftermath of the July 14 terror attack near the Temple Mount. Speaking on condition of anonymity, the Israeli official said that as long as the talks focus on the prelude to talks on a peace conference, the government is pleased and its strategy is vindicated. Israel is convinced that nothing much will occur in 2017, as Abbas will not accept another Israeli condition to stop his government from paying families of Palestinian prisoners and terrorists, and with Trump preoccupied with US domestic issues.

Netanyahu also told French President Emmanuel Macron in Paris on July 16 that Israel will agree to an eventual peace process only in the framework of a US-led process based on a regional anti-terror coalition.

And so, despite US shuttle diplomacy, with a gloomy mood in Ramallah and a more upbeat mood in Jerusalem, it seems that when it comes to a necessary peace process, both sides are losing.