The end of Abbas, the end of moderation

Israeli politicians have labeled Mahmoud Abbas a "non-partner," but they will be hard pressed to find anyone as moderate among the future Palestinian leadership. 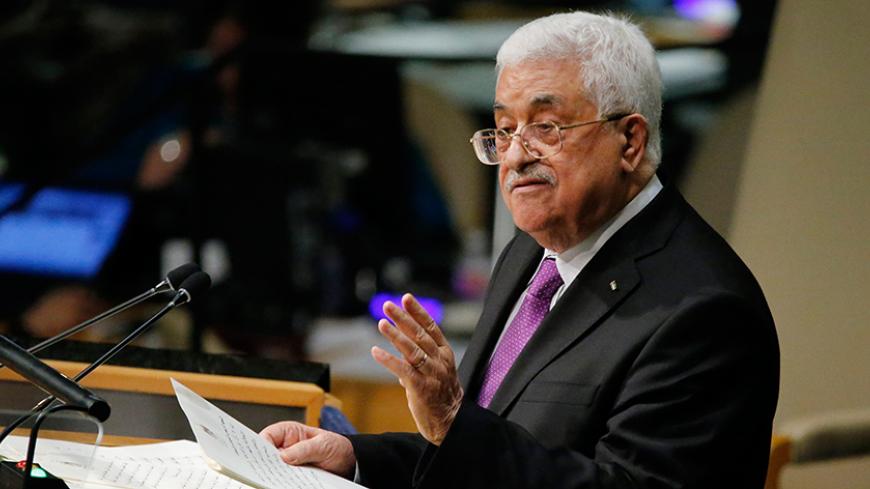 We are probably nearing the end of the Mahmoud Abbas era, which also marks the end of the leadership era of the Tunis-based Palestine Liberation Organization (PLO) guided by the late PLO Chairman Yasser Arafat and his disciples. Its conclusion will be followed by uncertainty and chaos before a new regime and a new reality take shape.

It is still uncertain when (and whether) Abbas will resign. Before Abbas' Sept. 30 UN General Assembly speech, a close confidant of his, speaking on condition of anonymity, told Al-Monitor that Abbas despairs of the possibility of establishing a Palestinian state by peaceful means. He stated, “Abbas objects to violence and is a true believer in Palestinian diplomacy. He has completely given up on Israeli willingness to end the occupation and on [President Barack] Obama's readiness to intervene with [Prime Minister Benjamin] Netanyahu. He believes Israel never intended to implement the Oslo Accord. He spoke to us of his wish to resign before the next elections, which he would like to be held in the near future, and possibly to declare the entire West Bank and East Jerusalem a state under occupation. In any case, security cooperation with Israel will depend on full compliance by Israel with the Oslo Accord, including a timeline for statehood.”

Like Moses, Abbas will be the leader who saw the “promised land,” but never reached it. After resigning, he will be missed, including by many of his sharp critics in Israel, Palestine and the world. Indeed, Abbas is a true moderate. He, along with PLO chief negotiator Abu Alaa (Ahmed Qurei), masterminded the Oslo Accord. Both of them worked hard to convince Arafat to take the diplomatic route. Beginning in the mid-1980s, Abbas came to believe in the need to talk to and recognize Israel. During the Oslo process, he was convinced that a gradual approach was necessary from the perspective of both sides to eventually arrive at a permanent status solution, as the 1995 Oslo II agreement outlined.

Abbas himself actually launched the first round of the permanent status talks in early May 1996 in Taba, Egypt. His vision at the time was of a cooperative relationship between two states as of the year 2000. Although critical of Arafat's nation-building efforts after the establishment of the Palestinian Authority (PA), Abbas entirely blames Israeli noncompliance for the failure of Oslo to produce a two-state solution, especially in regard to the agreed-upon further withdrawals of the Israeli military from the West Bank, the lack of freedom of movement for Palestinians in the territory and Netanyahu's unwillingness to seriously negotiate a two-state solution.

The most moderate choice to replace Arafat was definitely Abbas. Despite his criticisms, Abbas has an affinity for Israel's achievements and is open-minded in regard to its values and interests. During Passover in 1996, he attended the Seder dinner at the home of Martin Indyk, the US ambassador to Israel. After the reading of the Hagada, recounting the story of the Jews' liberation from Egyptian rule, Abbas responded, “I can concur, it's all against oppression of another people.”

Abbas is the leader with whom Israel could and should have made peace. Today it is clear that an opportunity has been missed by all sides. Israel, which under Netanyahu has often referred to Abbas as a “non-partner,” will have a hard time finding anyone as moderate as him at the helm of the Palestinian leadership.

While Abbas is correct about Israel's nonimplementation of important provisions of the Oslo Accord, the Palestinians were guilty of the same. The main flaw in Israel's implementation was the economic strangling of the PA with excessively stringent security measures in support of the Israeli settlements on the West Bank. Meanwhile, the Palestinians initially performed poorly on the anti-terror front.

When it came to a permanent status, successive Israeli governments — under Prime Ministers Ariel Sharon, Ehud Olmert and Netanyahu — saw Abbas' moderation as an opportunity to demand unrealistic concessions. No Palestinian leader, however, can compromise on the principles of the 1967 border (with minor land swaps) and East Jerusalem as the Palestinian capital. Abbas hinted more than once at a degree of Palestinian flexibility on the right of return and on declaring an end to conflict. Yet, Abbas himself missed the opportunity, at least during Olmert's tenure and to some degree during the Obama presidency, to make the necessary decisions to achieve Palestinian statehood, mainly in relation to longer-term security arrangements and to recognition of Israel as the state of the Jewish nation.

The US administration, which does not spare criticizing Abbas, knows that he will be followed by a more nationalistic and hawkish leadership. The day after Abbas indeed looks bleak. Hamas is gaining power against the fertile backdrop of political stalemate, economic hardship and religious incitement. The only Fatah elements capable of confronting Hamas are the PA's security and intelligence forces. Some form of military dictatorship is not beyond the realm of possibility. Abbas' successor could, with time, be a Palestinian Abdel Fattah al-Sisi.

The situation evident from Abbas' UN speech, however, still leaves the door open for the United States and Israel to work with Abbas on a transition period toward a viable peace process. Only a realistic horizon for a two-state solution based on the 1967 borders can preserve any hope that moderation will reign in the PA and the PLO.