Why an Abbas departure would be bad for Israel

Israeli Prime Minister Benjamin Netanyahu prefers a weak Palestinian President Mahmoud Abbas, but at the same time needs him to stay in power. 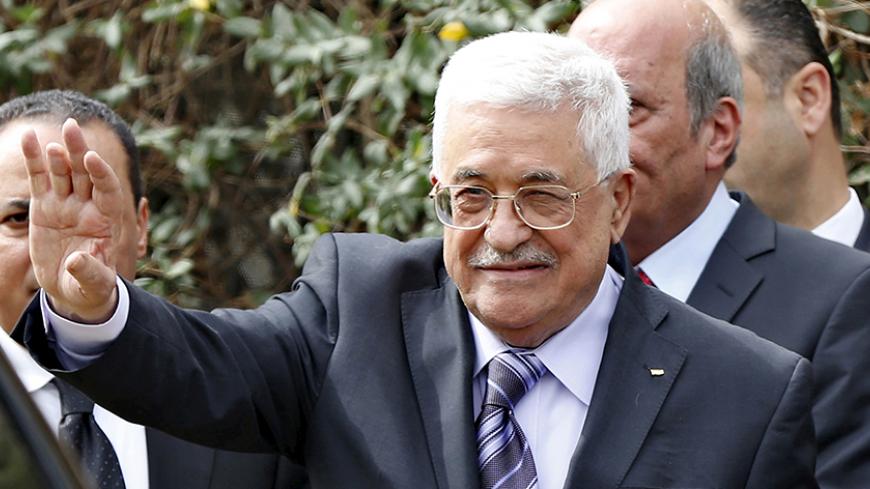 Palestinian President Mahmoud Abbas waves at US Secretary of State John Kerry as he leaves after their meeting in Amman, Oct. 24, 2015. - REUTERS/Muhammad Hamed

The Palestinian Maan News Agency published an article on Jan. 4 titled “Palestine after Abbas” by Ramzy Baroud. This is a clear indication that the prospect of Palestinian President Mahmoud Abbas resigning is a realistic possibility.

The rumor mill in Ramallah is working overtime as to the various scenarios for Abbas’ departure from power. Abbas represents the old guard of the Tunis leadership who, under Yasser Arafat, created the Palestine Liberation Organization (PLO). It’s a leadership that placed the Palestinian cause on the international agenda — first through the armed terrorist struggle against Israel and later with the Oslo Accord. This leadership succeeded in focusing world attention on the occupied territories and brought about the creation of the Palestinian Authority (PA), generating hope for independence and statehood. And it is on that hope that this leadership, and especially Abbas, disappointed the Palestinian people.

In the eyes of most Palestinians, the failed strategy of negotiation and diplomacy expresses a betrayal by the current leadership of the Palestinian national cause. According to a Dec. 14 poll by the Palestinian Center for Policy and Survey Research, two-thirds of Palestinians are in favor of replacing Abbas.

A senior PA official told Al-Monitor on condition of anonymity that there is no certainty that Abbas will indeed leave his post; moreover, Abbas actually has no intention of doing so. Nevertheless, the source admitted that the political situation of the president is unstable. Abbas is 81 years old and people want a changing of the guard. Armed struggle is more popular today in the Palestinian street than diplomacy. The economy suffers from a deep crisis given the security situation and the fatigue of the donor community.

The PA official, who is part of the president’s circle, blames the international community and part of the Arab world for letting Abbas down. He said, “International passivity is a kiss of death to Palestinian moderation.”

According to the source, the Palestinian leadership's future could be played out in various scenarios. The most likely scenario, he believes, is that Abbas will stay in power. While criticized across the board, Abbas is still viewed as the leader who enjoys the best relations with the international and Arab donor community. A second possibility would be that of changing leadership at a later stage (where Abbas stays only for the short-term). In that case, the security authorities might take over, with a possible new figurehead as president.

The PA official noted that the only outside party with a role in this possible future power struggle could be Egypt. The Egyptians may want to see an Abdel Fattah al-Sisi-like regime (led by a general) in the West Bank in order to counter Hamas.

Altogether, the PA official claimed that, in the long run, the old guard — “Tunis PLO” — regime would probably come to an end. A new leadership will emerge from Fatah grassroots in the West Bank. These new leaders would be young people who fought in the past intifadas — a leadership that would be more militant, more nationalistic, and in favor of a two-state solution without any concession to Israel. It would be an effective leadership, but with little love lost for liberal democracy.

For Israel, that would be bad news. This would most probably mean that continuation of the security cooperation would be conditioned on a short, realistic process toward a two-state solution. A personal confidante of Prime Minister Benjamin Netanyahu expressed very sharp criticism of Abbas. He described Abbas as a double-faced and weak person. To the world, the source claimed, Abbas speaks in a moderate language about a two-state solution. In reality, he is inciting violence by glorifying the individual terror acts. He attempts to prevent an intifada only out of self-interest. Netanyahu, he argued, sees in Abbas a rejectionist who refuses to recognize Israel as a Jewish state and a weak leader who will sooner or later be overthrown by the fundamentalists.

Despite this blatant criticism, the official admitted that Abbas is still the Israeli government’s preferred option and that the prime minister’s office is concerned about the possibility of Abbas being overthrown. Asked how the Netanyahu government would deal with an alternative leadership, he said that it would present to this new leadership the same conditions it had presented to Abbas: Without the recognition of Israel as a Jewish state and an acceptance of Israel’s basic security arrangement demands, there would be no two-state solution.

Indeed, it is clear that the Netanyahu government is faced with a dichotomy: on one side, it wants a weak Abbas; on the other, it wants him to stay in power.

Netanyahu did his utmost to weaken Abbas, refusing a realistic two-state solution by significantly expanding settlement construction, releasing Hamas prisoners and not prisoners of Fatah and launching a worldwide communication campaign to depict Abbas as a terror instigator. But at the same time, privately, in the confidence of his close associates, Netanyahu prays for Abbas’ political survival.

Israel will probably soon find out that it does not work both ways.