With one year left in office, President Barack Obama should hurry up and join the French in promoting an international conference on a two-state solution. 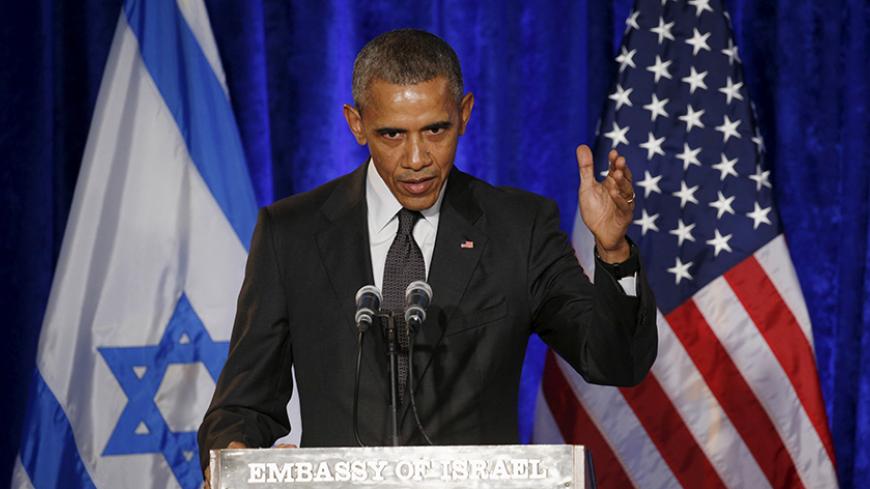 US President Barack Obama speaks at the Righteous Among the Nations Award Ceremony, organized for the first time in the United States by Yad Vashem, at the Israeli Embassy in Washington, Jan. 27, 2016. - REUTERS/Kevin Lamarque

President Barack Obama is leaving office in one year’s time. On his record he can include changing the rules of the game in current international relations toward an assertive collective diplomacy in coordination with major world powers — Russia, China and the European Union — leaving the use of force as a last resort. Obama has put an end to the wars in Iraq and Afghanistan, achieved a historic agreement curbing Iran’s nuclear capacity and, it seems, is making progress on arranging the sharing of power in Syria.

But there is one area in which the Obama administration failed to make progress: resolving the Israeli-Palestinian conflict. His efforts were blocked by the Israeli settlement policy and by the weakness of the Palestinian Authority (PA). In his recent foreign policy review on Jan. 22 at the World Economic Forum in Davos, Switzerland, Secretary of State John Kerry did not say a single word about this issue.

This leaves the Israeli-Palestinian relationship in a volatile situation. Violence and terror are rampant, and so are the rumors in the West Bank concerning a possible breakdown of the PA and an eventual armed intifada. The question is: Should Obama, in his last year in office, give up on the two-state solution? In a Jan. 21 press conference with Israeli correspondents at the Muqata, President Mahmoud Abbas called on the international community to convene an international peace conference on a two-state solution based on the Arab Peace Initiative of 2002. He also asked for a freeze of Israeli settlement construction and the release of 36 pre-Oslo Palestinian prisoners incarcerated in Israel. These ideas became the basis for the French initiative of Jan. 29 in favor of convening of an international conference. French and Palestinian diplomats held close consultations on the initiative over the course of January.

A senior PA official with access to the president told Al-Monitor on condition of anonymity that this is the last diplomatic offer Abbas would make to the international community. He said, “Abbas is a man of moderation and is probably the last leader in this situation to prefer diplomacy over an armed uprising or struggle. The US, and not only France, would do right to take Abbas up on his offer, since the alternative is a fundamental destabilization of the regional situation.”

The official analyzed the various scenarios of violent deterioration if an international peace conference is not convened in the near future. The dangers include an armed intifada joined by Fatah, a possible dismantling of the PA and the resignation of its moderate leader. All these possibilities, according to the Palestinian official, would lead to wider regional radicalization and strengthen fundamentalist groups such as Hamas, Hezbollah and the Islamic State (IS). Abbas’ proposal for an international conference based on the Arab Peace Initiative now has great value and should be accepted by the United States, he argued. The official added that the United States is investing in much diplomatic effort with Israel and the PA to avoid violence and is focused on weakening IS and other fundamentalist organizations. This strategy will probably suffer a setback if an armed intifada breaks out, given the solidarity in the Arab world with the Palestinians' struggle.

Economic confidence-building measures and enhancing security cooperation will not suffice. Only a significant step toward a two-state solution can stabilize the area. Abbas is proposing the Arab Peace Initiative of 2002 as a basis for negotiations because it will provide him with the necessary backing of the Arab world for a diplomatic route. The initiative also has many advantages for Israel. It links the two-state solution to the normalization of Israel's relations with Arab countries, leaves the issue of the Palestinian right of return to an agreement with Israel and includes a mutual land swap in relation to the 1967 border. The United States as well could accept this as a platform, as such a framework served as one of the pillars for the 2007 Annapolis conference.

A senior US State Department official told Al-Monitor on condition of anonymity that Washington is aware of the Abbas proposal and has not rejected the French initiative. The official acknowledged the value of an international conference with agreed-upon terms of reference. Yet he questioned the timing, given Israeli Prime Minister Benjamin Netanyahu’s positions and Abbas’ lack of flexibility on conditions for the conference. Be that as it may, the official said that the State Department is still considering various policy moves that could create a platform for a future peace process, such as a presidential policy speech advocating Kerry’s policy framework as presented to the parties in April 2014. He did not rule out an international gathering to create a new platform for peace talks even during the remaining days of the Obama administration.

It's too late for Washington to agonize over these dilemmas, given the despair in the PA and the violence on the ground. Washington would be well-advised to hurry up and convene the proposed international conference based on both the Arab Peace Initiative and Israel’s security needs.