How the Islamic State hurts Palestinian cause

The Palestinians fear that the international preoccupation with the Islamic State threat offers the Netanyahu government a possible argument for evading serious negotiations for a two-state solution and to gain more ground with its right-wing base. 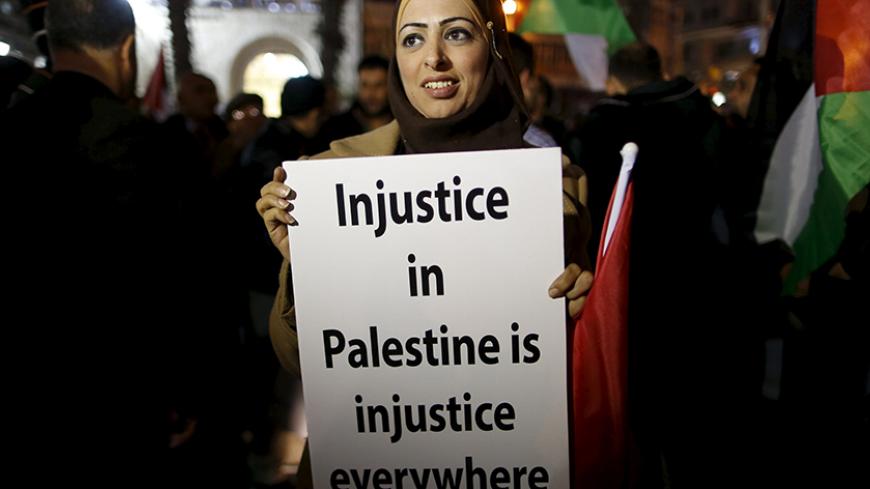 A Palestinian woman holds a sign during a protest against the visit of US Secretary of State John Kerry to the West Bank city of Ramallah, Nov. 24, 2015. - REUTERS/Ammar Awad

There is great frustration within the leadership of the Palestinian Authority about the shift in the international community’s agenda in the aftermath of the Paris terror attacks of Nov. 13. Before that, Iran had been, for months, the focal point of interest and attention. But now — and for a considerable time period to come — it will be the Islamic State. The more moderate elements of the Palestinian leadership are questioning whether the path to international attention goes through extremism and violence.

A senior Fatah source in Ramallah told Al-Monitor, on condition of anonymity, that while many Palestinians empathize with the anti-Western sentiment prevalent in several Arab countries, the attitude toward IS is one of great hostility. He said, “We feel that IS is kidnapping Islam toward a misguided interpretation and toward a stigma of violence in the eyes of the world. IS is a disaster for Islam and for the Palestinian cause; they [the misguided interpretation and the stigma of violence] are the best allies of the Israeli right’s campaign to continue the occupation with the excuse of fighting Islamic terror. Palestinian resistance is about achieving a legitimate Palestinian state, not an Islamic caliphate.”

The source also emphasized that IS' success in hijacking international attention is a challenge to the nonviolent policies of President Mahmoud Abbas. Many in the leadership of the PA are asking the rais (president): “Maybe in order to get America’s attention, we should renew the armed struggle?”

The Fatah official said, with great anger, “We will not let IS, or for that matter the other fundamentalist movements, take a ride on our back. Palestinian independence and Jerusalem are not their cause.”

He claimed that within Fatah’s leadership, deliberations are taking place on how to place Palestinian statehood back on the international agenda.

Indeed, this is a difficult predicament for the Palestinians. The moderate position of Abbas and his security cooperation with Israel have not paid off; this was made clear to the Palestinian president during US Secretary of State John Kerry’s visit to Ramallah on Nov. 24. Opting for a violent intifada may be the last option left to him but, at the same time, this option may be endangering the stability of his regime. In this situation, Abbas — according to the Fatah source — would have preferred an international diplomatic initiative at the UN Security Council or with the P5+1 (five permanent members of the Security Council plus Germany). Alas, that now seems virtually impossible. And so, other policy options must be considered in Ramallah.

Indeed, the IS threat on international stability is the prime preoccupation of governments and public opinion in all Western countries. IS has also given the Netanyahu government the best possible arguments for evading a two-state solution; the prime minister equates IS terror attacks in Syria, Iraq, Lebanon and Egypt with the unorganized Palestinian terror against Israelis.

This is not how the Israeli army sees it; its perception of the situation differs from that of the prime minister. According to press reports across Israeli media on Nov. 25, a senior military source in the Israel Defense Forces' Central Command characterized the great majority of Palestinian terror attacks as inspired by the despair of individuals, not guided from above, and recommended the strengthening of the PA, including the supply of arms.

Prime Minister Benjamin Netanyahu has rejected the army’s recommendation, as his office announced to the press the same day. He also refused Kerry’s proposals for a settlement freeze and a transfer of economic responsibilities in West Bank Area C (under Israeli civil and security control) for Palestinian agricultural and industrial development. The prime minister is concerned with the wave of daily terror incidents, but as with all Palestinian violence against Israel, he first sees it as an opportunity to evade serious negotiations for a two-state solution and to gain more ground with his right-wing base.

Rejecting the army’s recommendations during a violent struggle is quite rare in the Israeli decision-making process. Netanyahu remains consistent in his two main strategic targets, as defined by him in the March 17 elections: the prevention of the establishment of a Palestinian state and securing the support of the right wing, including the settlers. A Likud Knesset member backbencher told Al-Monitor on condition of anonymity, “The good thing about Netanyahu is that he says what he thinks, the bad thing is that he actually believes what he says.”

The Paris terror attacks by IS have affected the Israeli-Palestinian equation. The Palestinians feel completely hopeless about achieving diplomatic progress on a two-state solution and the Israeli government feels vindicated in its desire to prevent this option. This may very well lead to further escalation, toward large-scale violence in and from the West Bank. The danger of a large-scale intifada or intensified terror activities should ring alarm bells in Western capitals. The current situation could turn Netanyahu’s view of Islamic IS-like terror against Israel into a self-fulfilling prophecy, including religious violence over Jerusalem.

In the aftermath of the Paris attacks, an American diplomatic initiative creating a path leading to a two-state solution is of great importance. Tactical confidence-building measures, as suggested by the secretary of state, will not suffice. One should not underestimate the potential of the Israeli-Palestinian conflict to produce doomsday scenarios.