Preparing for statehood, Palestinian officials presented detailed security plans and strategies to retired American Gen. John Allen when he came for security talks in 2013-2014 as part of the Kerry peace talks. 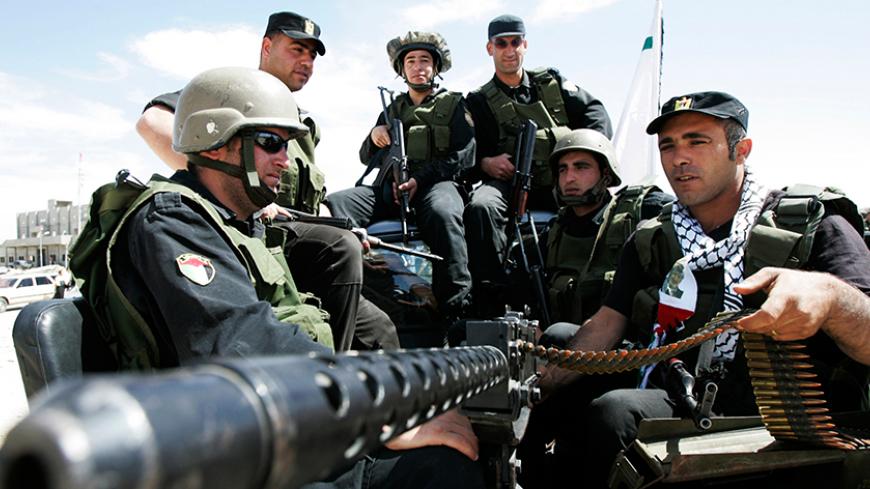 With the strengthening of the Islamic State among fundamentalists in the Arab world and elsewhere in the aftermath of the Paris terror attacks on Nov. 13, questions are raised in Israel about the Palestinian ability to maintain security in the eventuality of a two-state solution. Prime Minister Benjamin Netanyahu has said on numerous occasions recently that in the case of a two-state solution, the Israel Defense Forces would remain in charge of West Bank security.

A senior Palestinian security official in Ramallah with much experience in the field told Al-Monitor, on condition of anonymity, “Netanyahu is daydreaming. With statehood we will be in charge of security in the West Bank and Gaza and we will do it better than the Israelis. Look at Israel, which, with all its superpower military might, has not succeeded in curbing terror, even today when it is sporadic; Israel is not able to fight some dozens of frustrated youths. And it has lost two wars to Hamas, according to any objective observer.”

He said that at the time of a two-state solution, Palestinian security will be willing to coordinate with Israeli counterparts (not the politicians) a strategy that would bring security to both sides. He added, “In the meantime, Israel must comprehend that the root cause of the violent Palestine resistance is the occupation; putting an end to it will enhance security.”

The security source said that detailed plans and strategies already exist when it comes to Palestinian security policy for a Palestinian state. These plans were presented to retired American Gen. John Allen when he came for security talks in 2013-2014 as part of the peace talks with Secretary of State John Kerry. They include an agreement for the demilitarization of the Palestinian state, while maintaining an armed police force for public order, a border police force and an anti-terror intelligence service. Along the Jordan River, the new future border with Israel, and also in the Gaza Strip, the Palestinians are ready to have an international monitoring force headed by the United States, possibly with the participation of NATO and an Arab League force. Israel could partake in this force for a period not exceeding four years for monitoring purposes, not for occupation, the source said.

The source recounted that he had held exploratory talks in Cairo with Egyptian intelligence officials about a future role for the Egyptian army in the Palestinian security strategy, both in the West Bank and in Gaza. He has much confidence in the Egyptians and believes they have credibility in Israeli and American eyes.

Based on this Palestinian view, and on Israel’s legitimate security concerns given the regional turmoil, it seems that Israel must now reassess its anti-terror security strategy in the case of a two-state solution.

Security in this era of international terror can only be achieved within the framework of multilateral effort, through collective diplomacy and collective anti-terror activity.

A senior source in Brussels dealing with European Union regional issues in the aftermath of the Paris attacks told Al-Monitor that policy planners at the EU headquarters are considering a P5+1 diplomacy and security policy model (the five UN Security Council permanent members plus Germany) for the Israeli-Palestinian issue. Such a move would include diplomatic efforts by the P5+1 group vis-a-vis Israel, the Palestinian Authority (PA) and the Arab League on a two-state solution based on a consensus that should be reached by the P5+1, taking into consideration the US framework proposals suggested in spring 2014 by Kerry, the Arab Peace Initiative of 2002 and Israel’s security needs.

In parallel, EU policy analysts are considering a collective security package that would be part of a future peace process. This would include Israeli-Palestinian anti-terror cooperation in the West Bank, with a temporary Israeli military presence along the Jordan River, to be backed by US and EU intelligence capacities and an international monitoring force. For Gaza's security, an important role is foreseen for Egypt, in cooperation with the PA and Israel.

In terms of the region, the P5+1 group would coordinate broader anti-terror cooperation, which is gradually already becoming the case in the aftermath of the Paris attacks.

The senior Brussels source told Al-Monitor that EU security experts had held informal talks with senior Palestinian security officials. According to him, there was a broad understanding with the Palestinians about the need to view terror as a threat to Palestine no less than it is to Israel. The EU would be willing, with the UK government coordinating efforts on the matter, to contribute anti-terror capacity-building training.

The senior Palestinian security official in Ramallah told Al-Monitor that informal security talks with the EU did indeed take place, but did not attribute any significant importance to these exploratory feelers. In his view, the solution to the terror challenge regarding Palestine and Israel is of a political nature: “Without an end to the occupation and a two-state agreement that takes the security interests of both sides into consideration, terror will only spread and worsen, inspired by Hamas and the social networks. Peace is the real answer to security concerns.”