Regarding Israel being known as a "Jewish state," a Palestinian official said Palestine would recognize whatever the international community recognizes at the United Nations, saying, "It's not for us to define Israel’s identity. It’s up to Israel." 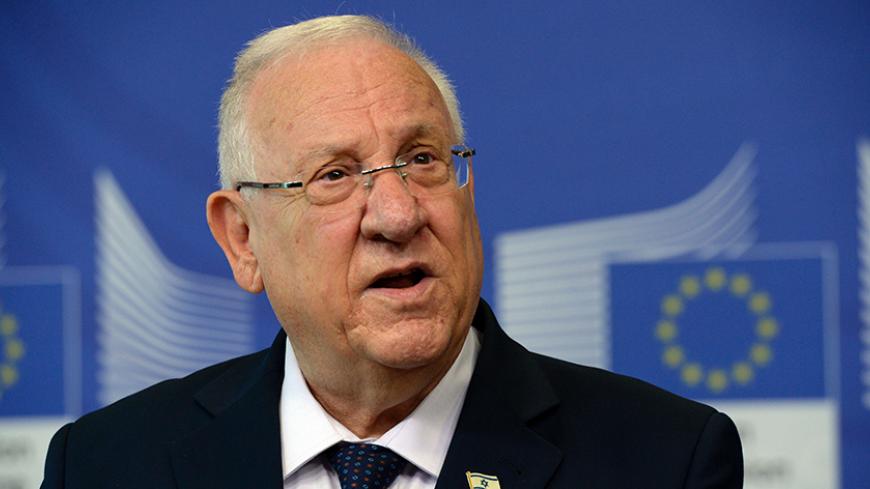 Israeli President Reuven Rivlin talks to the media following a meeting with President of the European Commission Jean-Claude Juncker at the commission's headquarters in Brussels, June 23, 2016. - THIERRY CHARLIER/AFP/Getty Images

In the aftermath of the European Union Foreign Ministers Council endorsing the French Initiative on June 20, Israel and the Palestinian Authority are engaged in a diplomatic battle over the EU position on permanent status.

In his talks in Brussels, Israeli President Reuven Rivlin presented Israel’s case in his unique style to the leadership of the European Parliament.

There is a sense of satisfaction within the Palestinian leadership in Ramallah with the decision of the Foreign Ministers Council.

A senior Palestine Liberation Organization official told Al-Monitor on condition of anonymity that policy-planning officials were now charged with exploring various policy proposals that could be adopted within the framework of the 2002 Arab Peace Initiative: “We take the Paris declaration at face value and expect a similar wording in the [soon to be published] Quartet report. We will exert pressure on the international community, especially the EU, to create a more detailed frame of reference for a two-state solution.” He told Al-Monitor that while the basic Palestinian position on all permanent status issues is well-known to the EU, thought is now being given to ways to creatively bridge gaps between Palestinian positions and Israeli concerns on two key issues: recognizing Israel as a Jewish state and security arrangements.

He said, “It’s not for us to define Israel’s identity. It’s up to Israel. We will recognize whatever the international community recognizes at the United Nations. If Israel wants to secure a more Jewish identity, it has to, first of all, give up on the occupation and grant equal rights to the Palestinians living inside Israel.''

As to the security arrangements of a two-state solution, the official noted that security is a concern shared by both sides. “A sense of security will emerge as a result of ending the occupation of our people and from peaceful relations between the two states.” He said that Israel’s real security concerns are well understood, though they serve, in his view, as a pretext for the conquest of Palestinian land.

In terms of security arrangements, there are four main elements that the Palestinian Authority is ready to adopt, the source said. The first element would be accepting that the future Palestinian state would be demilitarized, with a strong internal security force against terror and for public safety. In addition, the Ramallah leadership values the importance of an international force, with the participation of the Arab League as well as NATO, and even headed by an American officer. Such a force would be deployed along the new borders, including the Jordan River and the border passages. A third element concerns anti-terror activity, which would take place in cooperation among Palestine, Israel, Egypt, Jordan and the international force. Lastly, there is the issue of the Jordan Valley. The Palestinians believe that Israel’s security demands there are a ploy for annexation of important parts of the West Bank, yet they are ready for a temporary Israeli presence in a narrow strip along the Jordan River for a period of six years from the signing of the permanent status agreement.

The official concluded these points by emphasizing how flexible the Palestinian position could be. With these positions formulated, he held, the international community must realize how pragmatic the intentions of the PA leadership really are compared with Israeli rejectionism.

Similar Palestinian positions have, to a large degree, been made clear to former Ambassador Martin Indyk, who was the coordinator for US Secretary of State John Kerry’s peace efforts in 2015. The positions may be of a tactical nature, but in essence reflect the basic principle by which the Palestinian state must be created along the 1967 lines, without territorial concessions, except for minor and parallel land swaps. Any Palestinian flexibility, according to Ramallah, must be based on this principle.

It must be understood by Israel that the pragmatic wing of the PLO supports mutual security and will not accept annexation and settlements.

The ball is very much in the Israeli court. Not all Palestinian positions must be accepted, except for a fair two-state solution based on the 1967 lines. Israel has the right to make stringent security demands and to request regional security cooperation against terror as well as normalization of relations with the Arab states.

As to Israeli state Jewishness, its identity is indeed up to Jerusalem — not Ramallah or Cairo — in definition, demography and values.