In face of Israel's new right-wing government, the Palestinian Authority is planning a diplomatic offensive to reconquer the interest of the international community. 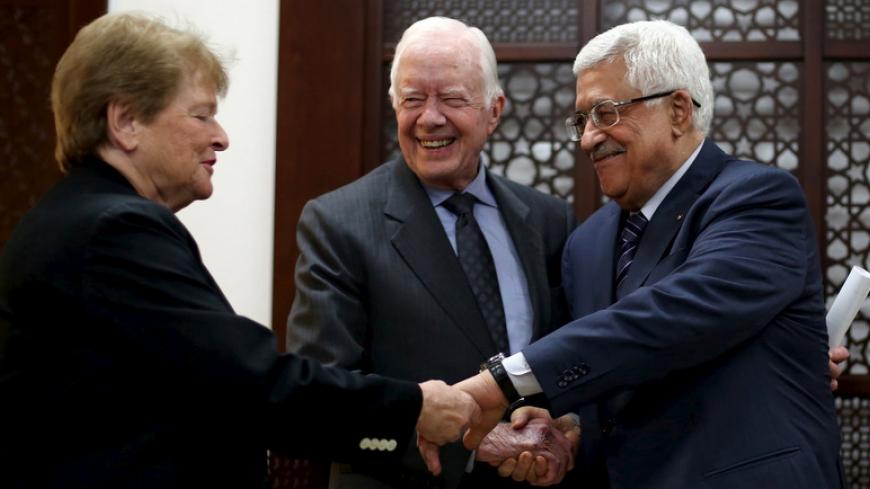 The Palestinian leadership follows with disdain and frustration the establishment of the new Israeli government: “With the outgoing government we thought it could not get any worse, but it seems that we were wrong,” a senior official in the entourage of Palestinian President Mahmoud Abbas told Al-Monitor. The official, who spoke on condition of anonymity, did say that the advantage of the extremist nature of the Israeli government to-be is that now the Palestinian statehood issue would be put to the test, without international demands for incremental progress. “It’s a make-it-or-break-it time,” he said.

The Palestinian leadership, according to this source, is planning at the very outset of the new government to put a policy strategy in place to try to convince the international community to deal with the Palestinian issue again, despite the focus on the Iran negotiations.

The official outlines several phases of this strategy. At first, the Palestinians intend to reveal to the world the rejectionist nature of the new Israeli government. With this goal in mind, they have already passed messages to the US administration and to key EU governments stating Palestinian readiness to renew negotiations with the Israeli government by starting off at the very same point where the previous negotiations left off (the Ehud Olmert government negotiations and the negotiations orchestrated by Secretary of State John Kerry).

The Palestinian source told Al-Monitor that messages have been recently conveyed by the Israeli leadership proclaiming its readiness to increase economic cooperation with both the West Bank and Gaza. He expressed suspicion, estimating that Prime Minister Benjamin Netanyahu was aiming for “economic peace” only — in other words, guaranteeing Israel's security through economic measures. “That is categorically rejected by Abbas,” said the source.

He said the Palestinians intend to relay to the United States and the European Union what he defined as “pragmatic positions” on all core permanent status issues to reveal the dogmatism of the Israeli side:

On the principle of borders based on the 1967 lines, they are ready for mutual and parallel land swaps. On Jerusalem, they are ready on the basis of reciprocity to recognize West Jerusalem as the Israeli capital. On security measures, the Palestinians are ready for a temporary Israeli military presence along the Jordan River and for a more prolonged international presence. On the refugee issue, they agree with the wording of the Arab Peace Initiative of a “just and agreed solution.” They are also ready to commit to full normalization between the two states, as well as trilateral economic cooperation that includes Jordan. During the negotiations they will insist on a settlement construction freeze.

Other Palestinian sources express a similar stance. The Ramallah government believes that this set of positions shows great flexibility, especially in view of the fact that the historic compromise on the land that was reached in Oslo, based on the 1967 lines, splits Mandatory Palestine, namely the land between the Jordan River and the sea, 73% (Israel) to 27% (Palestine). In the past, the PLO advocated 100% of the territory.

This relatively moderate approach is also what sets the West Bank leadership apart from Hamas. It is clear from talking to officials in Ramallah that, besides looking feverishly for ways to place the Palestinian issue on the international agenda, the issue that preoccupies them the most is the ongoing power struggle with Hamas. The so-called unity government is not functioning — Hamas boycotted Abbas' ministers and officials during a working visit to Gaza on April 20.

Hamas shows no interest in cooperating with Fatah on the reconstruction of Gaza and is investing much of its energies in rearmament and rebuilding the tunnels. Fatah wants to indulge Palestinian public opinion by taking a nationalistic stand on the “diplomatic intifada,” yet it also wishes to please Egypt, Jordan and Saudi Arabia by taking a more pragmatic stand in relation to the US administration.

In that respect, the aforementioned Palestinian governmental source also expressed interest in the May 13 summit meeting in Washington and Camp David between President Barack Obama and the heads of all Gulf countries.

Indeed, the Washington summit is designed to defuse the Gulf leaders' concerns on the Iran nuclear agreement. It is targeted mainly toward Saudi Arabia, to signal to its leadership that the US administration objects to Iranian dominance in the region. The Palestinian issue will most probably take a backseat.

The isolated Palestinian Authority is therefore planning, with the establishment of the new Israeli government, a diplomatic offensive to reconquer the interest of the international community, whereby the PA will designate Israel as the culprit of a dangerous deadlock that could lead to violence. The aim is to unilaterally bring the statehood issue to a vote at the Security Council through a French initiative, while attempting to avoid an American veto.

A senior official at the French Foreign Ministry told Al-Monitor that France is still committed to advocating a resolution on Palestinian statehood and the renewal of peace negotiations between the parties, yet the timing is now also dependent on the negotiations with Iran. According to the French view, it would be difficult to obtain an American abstention on the vote while the Iran deal has not been finalized and reviewed by Congress. Not vetoing a resolution on Palestinian statehood would complicate the administration's battle with Congress.

This would leave the Palestinians without a diplomatic achievement in the foreseeable future. Talking to various West Bank officials, one can only conclude that a violent uprising, or even terrorism, are realistic scenarios for this coming summer.