France has been very proactive during talks on the Iranian framework agreement, and it intends to extend this proactive attitude to the Palestinian issue. 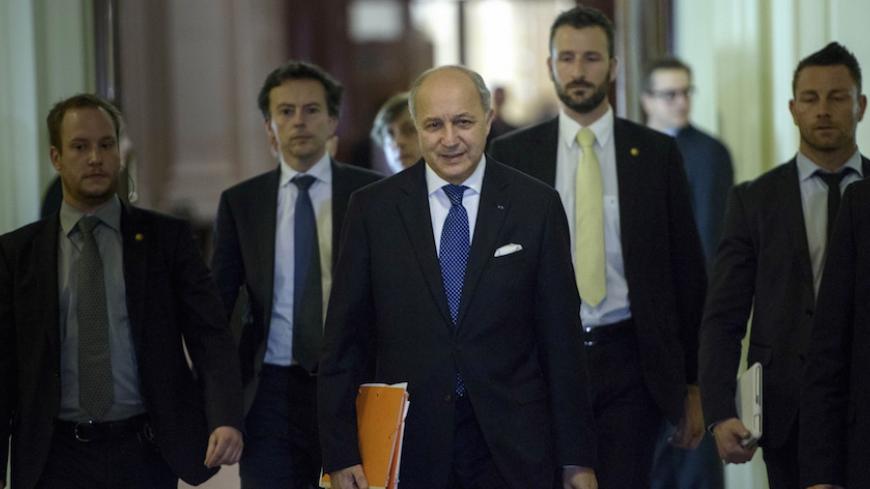 French Foreign Minister Laurent Fabius (C) walks with others during a break in a meeting with world representatives seeking to pin down a nuclear deal with Iran at the Beau Rivage Palace Hotel in Lausanne, March 31, 2015. - REUTERS/Brendan Smialowski

On the chessboard of the Lausanne negotiations on the Iranian nuclear agreement, France evolved as a surprisingly independent player. Compared with the other negotiating powers, French Foreign Minister Laurent Fabius espoused the toughest positions in relation to the timeline for lifting sanctions, the nature of inspections and curtailing Iran's ability to continue nuclear research and development. The French, who have earned a reputation as the appeasing side in such negotiations, emerged this time as the tough guy within the six world powers and the most proactive European player.

A senior French official at the Quai d'Orsay (French Foreign Ministry) told Al-Monitor that the policy adopted by French President Francois Hollande and Fabius is related to the French strategic view on the future of a Middle East in transition. This strategic approach of backing authoritarian regimes as opposed to irredentist and terrorist organizations has already been manifested in cases such as supporting Egyptian President Abdel Fattah al-Sisi's fight against the Muslim Brotherhood. France also sides with the pragmatic Sunni forces of Saudi Arabia and Jordan. This, he explained, is amplified by France's economic interests in Saudi Arabia, including the massive Saudi financing of French arms deals with Lebanon.

This current policy falls in line with the rather hawkish foreign policy attitude of both Hollande and former French President Nicolas Sarkozy, expressed in Libya and Mali over the past few years. In addition, the current French government enjoys good coordination with the American administration, which is reflected also in the positive personal rapport between Fabius and Secretary of State John Kerry.

The French official also told Al-Monitor that in the near future his country intends to assume a leading role in promoting a Security Council resolution in favor of Palestinian statehood.

The parameters for such a resolution are already known from similar French efforts in 2014. The resolution will probably include a demand for a border based on the 1967 line with mutual land swaps. Additional parameters will be security arrangements on the borders, including the presence of international forces, Jerusalem as a shared capital for the two states and a just and agreed-upon solution to the Palestinian refugee problem.

The French hope to convince the American administration not to cast a veto on that resolution. The Paris Foreign Ministry source sounded cautiously optimistic that Washington may abstain. Yet it seems that the United States has yet to decide on its next steps in the region due to the recent overwhelming focus on the Iranian issue. Paris considers the Iranian framework deal and the Palestinian statehood resolution to go hand in hand, mainly in terms of policy coordination with Egypt, Saudi Arabia and Jordan.

Given France's good relations with Egypt and Saudi Arabia, Paris intends to make the 2002 Arab Peace Initiative the basis for its peace efforts. This also suits the French regionalism approach, in terms of normalization between the Arab states and Israel, including regional economic cooperation.

At the same time, the source pointed out that France was now strongly committed to go ahead with the Security Council resolution initiative due to Prime Minister Benjamin Netanyahu's re-election and the anti-Palestinian state position he expressed.

While in Israel there is little enthusiasm with the renewed French diplomatic activism on the Palestinian issue, in Palestine this activism is perceived as encouraging. A source close to Palestinian Authority President Mahmoud Abbas told Al-Monitor that a Security Council resolution is needed as an essential milestone for the establishment of a state. The source believes that such a resolution will garner the same international weight as Security Council Resolutions 242 and 338.

"We have to put an end to the stalemate that has existed for the past 19 years since Netanyahu first came to power. We also have to demonstrate to our own some measures of progress," he argued.

He said that the Fatah leadership was split between those who favor an intifada and those who prefer the diplomatic route. He explained that for the "diplomacy first" group to succeed, the Security Council resolution must be of an operational nature, which means that a timeline has to be attached to it. According to the source, the timeline they are working on would be of a two- to three-year period, split into three phases.

The first phase of one year should be dedicated to technical negotiations for the implementation of the principles of the resolution. The second phase of one year should constitute the implementation of the border demarcation, security arrangements and land swaps. The third phase would be reserved for implementing issues that require more negotiating time — Jerusalem, refugees, security arrangements along the Jordan River and at the passages.

Sources in the Israeli Foreign Ministry expressed their doubts as to the French assumption, by which the United States will not cast a veto on such a resolution, especially given the centrality of the Iranian issue. The United States, they think, will be reluctant to confront Israel at the same time on two diplomatic fronts.