The Palestinian Authority views Benjamin Netanyahu's government as a hopeless case, so it plans to move forward on four tracks to achieve UN recognition of Palestine by 2015. 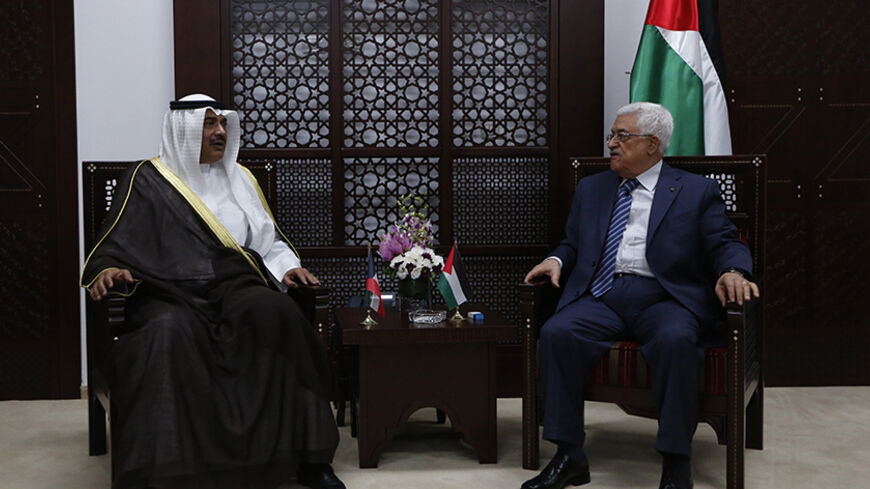 "Permanent status negotiations between the state of Palestine and the State of Israel is what we want to see in 2015," a senior political Palestinian source in Ramallah told Al-Monitor. A long monologue followed about Palestinian frustration with reduced international attention to the Palestinian predicament — a frustration shared by Palestinian President Mahmoud Abbas. What the Palestinians see from their telescope is a weaker US President Barack Obama, Europeans horrified by the Islamic State, Israel more messianic than ever and a self-centered Arab world. They now seek to restart negotiations only from a status of equality with Israel.

The Palestinians refuse to remain, from their point of view, the only country in the world under occupation. The old guard of Fatah — the group that served late PLO leader Yasser Arafat — knows it is their last opportunity. Abbas is 79 years old. The young guard is disillusioned with the path of two decades of futile negotiations; some yearn for an intifada, some want to see the more militant Marwan Barghouti as a main leader and others fall into the arms of Hamas. For many in the Palestinian Authority (PA) leadership, it's now or never.

Sources within Abbas' inner circle of associates feel fortified by the arrangements worked out with Hamas under Egyptian stewardship in Cairo on Sept. 25. They claim that Egypt played a pivotal role in pressuring Hamas to agree to a technocratic government leading the Gaza reconstruction and for Fatah's Presidential Security Forces to oversee all border crossings. This is by no means the end of Hamas, but it gives Fatah a new foothold in Gaza and bolsters its position toward Egypt and Israel. Israel now becomes more dependent on Fatah for security coordination.

Above all, it allows Abbas to speak of a two-state solution in the name of all the Palestinian territories. Abbas' feisty Sept. 26 speech at the UN General Assembly marked the demarcation of the Palestinian efforts — no more negotiations with Israel without an agreed border, a campaign at the UN for statehood with an agreed time line and the strengthening of the Fatah leadership in the eyes of Palestinians and the Arab world.

The main obstacle on the route to independence is Israel's "settlements first" policy and the complacency of the world. Palestinian sources claim that the PA will move forward on the following four tracks toward a "make it or break it" year.

Together, these four efforts result in a time line of goals, said senior political Palestinian sources. Talks with the United States must begin right after the Nov. 6 midterm elections to work out a possible framework for future negotiations. During the next UN General Assembly in September 2015, a declaration of the state of Palestine on a majority of West Bank territory is being contemplated, together with a resolution recognizing Palestine's right for a state with borders based on the 1967 lines and East Jerusalem as its capital. According to a Ramallah source, "If not peace now, then a state now."

Are the Palestinians optimistic that they will achieve these goals? Optimistic Palestinians is a contradiction of terms. But one can see a new sense of confidence in Ramallah, or at least of self-reliance, to be able to create an international consensus for the end of the occupation in the foreseeable future and to regain the support of Palestinian public opinion.

This positive trend may be sustained as the Palestinian leadership sees the pragmatic Sunni alliance in the Arab world as an opportunity to exert pressure on the Obama administration. The United States is in need of the anti-IS Arab coalition, and therefore the Arab League can serve as the bridge between anti-radicalism and Palestinian statehood, based on the Arab Peace Initiative.

The Netanyahu government is downplaying the Abbas initiative and sees the pragmatic coalition only as an anti-terror effort. The prime minister has only the ballot box in mind, and sees the Iran permanent deal negotiations and the anti-IS operation as merely an escape route from the Palestinian issue. Faced with the Palestinian "now or never" on statehood, he opts for the never.